Published On Nov 9, 2019 By Gaurav Sadanand for Benelli Imperiale 400

In a segment dominated by Royal Enfield, does the Imperiale do enough to win the hearts of classic bike lovers? 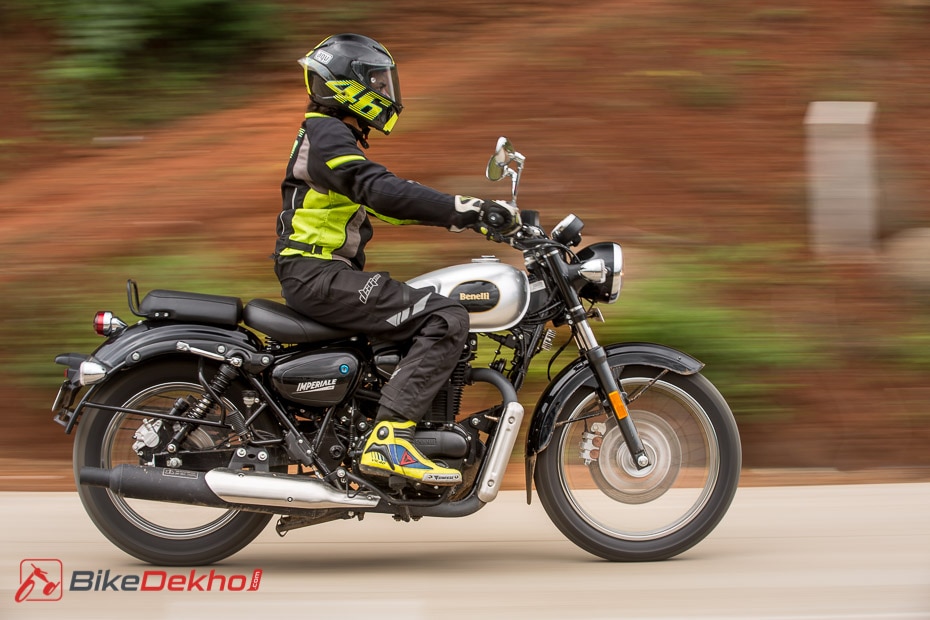 Royal Enfield’s Classic 350 has been ruling the retro motorcycle segment for over a decade. As it basked in glory, there were more fierce rivals in the making. The first such contender to question Royal Enfield’s throne was Jawa with the classic Jawa and Jawa 42. Joining in on the action now is Benelli with its very own retro bike - the Imperiale 400. It packs a long-stroke single-cylinder motor, which should be ideal for ambling about, old-school styling that harks back to classic British bikes, and a price tag that’s within reach. But is it doing enough to get people to overcome their Royal Enfield obsession?

One glance and you’ll notice that the Imperiale 400 borrows some design cues from the RE Thunderbird -- the way the headlight sits on the fork, the twin-pod analogue-digital instrument console, and the side panels. That’s not to say that the bike’s a rip off of the Thunderbird. It does, in fact, have its unique identity. The entire front section of the bike comes together beautifully and will remind you of classic British motorcycles such as the Nortons from the 1950s.

You have a simple but elegant front fender, a dome-shaped headlight, chrome-finished turn indicators and a slender fuel tank with tank grips and minimal graphics. Move past this section and onto the rear and you might feel that Benelli has lost its way a little. While the split seat fits in perfectly with the classic bike image, the rear fender looks a bit disproportionately large and the grab rail is just a bit uninspired.

The rear indicators also tend to hold moisture while the muck shovelled from the rear tyre seeps into the indicators. Benelli could have done a better job with all the wires and cables, which are very visible and we feel look a bit untidy. The switchgear quality is pretty acceptable, but certainly not the best in class.

But these are minor quibbles in an otherwise great design. The bike has some serious road presence and looks a lot more expensive than it is. The Italian bikemaker offers the Imperiale 400 in three colours: black, red and silver. If we were to pick one, we’d choose silver -- understated yet elegant.

Currently, the Imperial 400 is offered only in a single variant. However, Benelli says it’s working on a couple of new variants with different engine displacements, which will be launched soon.

A relatively low seat height 780mm means the Imperiale is accessible to riders of all heights. Most of you would even find it a lot easier to get your feet on the ground thanks to the narrow fuel tank. The wide comfortable seat, tall easy-to-reach handlebars, mid-set footpegs make for an upright riding posture, which means you could spend a lot of time on the saddle during long hauls.

The rear seat, on the other hand, is a tad on the stiffer side and slightly narrower compared to the Classic 350. This, when paired with a firm rear suspension setup tends to transfer jolts to your back especially over sharp bumps. The rear footpegs are also positioned higher than usual resulting in a slightly awkward seating posture for the pillion rider, which puts pressure on your lower and upper back.

One oddity is the extra-long gear shift lever. If you have large-sized feet or are wearing short boots, it shouldn’t be too difficult to reach. But those with smaller feet, wearing full-size riding boots might have slight difficulty getting their left foot under the shifter without moving it quite a bit forward. That aside, the footrest itself isn’t foldable and tends to bump into your shins while moving the bike around in the parking lot. And moving around isn’t the easiest task as the bike weighs a whopping 205kg -- that’s 11kg heavier than the already heavy Classic 350.

There isn't much to talk about in teams of tech, but there are a couple of features worth noting. For instance, the Imperiale 400 uses a conventional headlight (which has a clear lens), taillight as well as the indicators. The overall setup, especially the tail lamp, gels well with the neo-retro design theme. That said, when it comes to illumination, the headlamp lacks intensity, throw and spread. We'd say the illumination is average at best.

Next up is the twin-pod analogue-digital instrument console. The layout is neatly spread out with legible readings in all lighting conditions. A neat little touch is the digital fuel gauge, which is positioned smack in the centre of the two consoles. On top of that, it has a gear position indicator -- something of a novelty in this class of bike (even the significantly more expensive and powerful Royal Enfield Interceptor 650 doesn’t get one).

The bike features an adjustable brake lever, but it feels more like a marketing gimmick than an actual feature as the lever refuses to show any change in span despite four different settings. When it comes to rider aids, the Imperiale gets dual-channel ABS as standard.

The 374cc, fuel-injected, single-cylinder SOHC engine is an all-new unit for Benelli. Now given Benelli’s history of engines, you’d expect the bike’s power to come in only at high rpm. But that’s not the case here. The Imperiale is unlike any other Benelli we’ve tested before. It features wide gear ratios and has enough grunt throughout the rev range. So much so, that the bike chugs along at 40-50kmph in 5th without throwing a fit.

The engine also feels livelier despite making just 1PS and 1Nm more than the Classic 350. Mind you, the Imperiale weighs 11kg heavier than the RE, so that’s saying something. It’s also much smoother with vibes kicking in only after 5,000rpm. And even when some vibration does kick in, it’s just a mild buzz in the handlebar more than anything else. To put things into perspective, the bike red lines at 6,000rpm but can be pushed till about 7,000rpm before hitting the limiter.

Then there's the sound, which adds to its character. As you’d expect, the bike sounds like a twin cylinder rather than a single cylinder. How the Benelli manages to pull this off is beyond me. But then again, if there’s one thing Benelli has always nailed, it’s the sound of their bikes.

Out on the highway, this motor is capable of sustaining 100kmph in fifth gear all day with the tacho indicating a little under 5,000rpm. You can push the motor to about 130kmph but the softly sprung front suspension makes the bike feel a bit unsettled at those speeds.

The Benelli returns a decent fuel efficiency for a sub-400cc bike but loses out to the Classic 350 in the city. The RE’s bottom end grunt helps it putter around in city traffic with ease and helps  deliver about 4kmpl more. The Imperiale’s engine can run a little hot in traffic, but it’s nothing to worry about, and the heat never gets too bothersome.

Gear shifts on the Benelli are crisp and precise, however, the longer throw means you need to have large feet to get to the lever with ease. Or else, you’d end up missing a shift -- mostly when shifting from first to second gear. The clutch feels rather light, so constant gear shifts in city traffic doesn’t take a toll on your hand.

The BS4 compliant engine powering the Imperiale 400 will soon be updated to comply with BS6 emission norms, which may affect power figures. However, we could expect the motor to remain just as enjoyable as it currently is.

The Imperiale feels like it’s meant for the open roads rather than the city. For the small amount of time I had the bike, it felt more comfortable stretching its legs at 90-100kmph rather than crawling about at 50kmph.

The front suspension is set up on the softer side, which means it glides over bumps with ease, however, it feels a bit unsettled during mid-corner bumps. The rear suspension, on the other hand, is tuned to be slightly stiffer than the front. While it soaks in bumps well, it tends to transfer shocks to your back on sharp bumps or potholes. That isn’t a deal breaker by any means because the rear shocks have seven steps of preload adjustability, which means the suspension can be softened to absorb bumps better.

The Imperiale has the largest disk brakes in the segment (300mm upfront and 240mm at the rear). But it doesn’t make good use of it. Both the front and rear brakes feel spongy and lack bite and progression. And the braking distances speaks for itself. The Imperiale 400 takes 1.85m longer to stop from 80-0kmph and 1.53m from 60-0kmph, when compared to the RE, which isn’t all that great, to begin with.

The Benelli’s longer wheelbase means it has a larger than normal turning radius. Essentially, the steering is such that you’d have to take a three-point turn on a single lane road.

The Benelli Imperiale 400 is a full-fledged package and feels like it punches well above its segment. It’s what you’d get if you took the Royal Enfield classic 350, ironed out all the imperfections and plonked a capable motor in there. The motor has minimal to no vibes, enough grunt throughout the rev range and feels stress free even if you sit at 100kmph all day. Add a comfortable riding posture to the equation and you have a fantastic bike at hand. Let’s not forget that the Italian brand managed to do all this and offer the bike for just 1.69 lakh (ex-showroom).

Yes, there are a couple of niggles, but that’s the case with almost every bike. What could work against this perfect little classic bike, though, is the after-sales service cost. While we don’t have actual receipts at hand, we do know that servicing a Benelli costs more than its competition (at least in theory). Will Benelli be able to fix this with the Imperiale 400? We’ll just have to wait it out to see for ourselves.