While one redefined the entry-level performance segment, the other took it to the next level. We tested the FZS-Fi and Apache RTR 160 4V to find out which one comes out on top 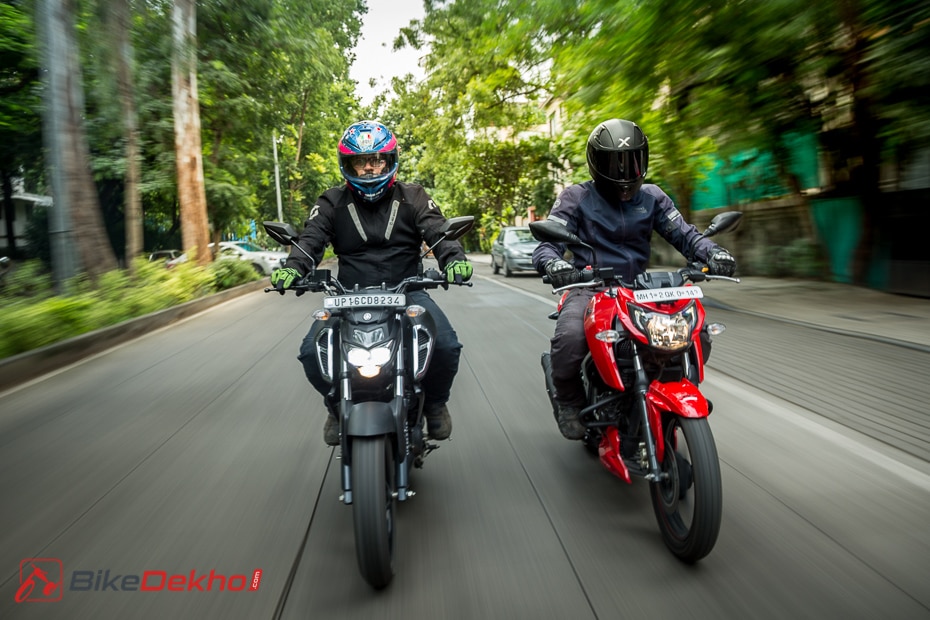 It’s been 10 years since Yamaha first introduced the FZ16 in India, a bike that set the cornerstone of what we know as the premium 150-160cc motorcycle segment of today. Entry-level performance bikes - if you will. Unique features like a muscular design, a fat rear-section tyre and a full-digital instrument console are what helped the bike distinguish itself from the rest. That was then though, and the competition has raised the bar with offerings like the TVS Apache RTR 160 4V, which has quickly become the new benchmark in that segment. In retaliation, Yamaha launched the 2019 FZS-Fi in an all-new avatar along with some unique features. But is it enough? And, can the 2019 FZS-Fi hold a candle to the Apache RTR 160 4V in real-world conditions?

Right, is the FZS-Fi significantly different in terms of looks? Yes and no! The new FZS-Fi gets an even more front heavy design that comprises of new elements such as a split LED headlight setup, beefier tank shrouds and a revised instrument console. The overall design is quite mature with minimal stickering, a matte black paint scheme and contrasting rim tapes.

On the contrary, the Apache RTR 160 4V’s design language is more in tune with the trends of today. It’s sharp and edgy when compared to the FZ’s bulky proportions. The lines on the bike, right from the headlight to the rear quarter panels, lean forward, giving it an aggressive stance. The angular headlamp with LED DRLs paired with the bright red paint scheme just adds to the drama. This RTR 160 4V is one of the best-looking 160cc commuter bikes in our opinion.

Again, in terms of quality, as surprising as it might sound, it’s the RTR 160 that takes the cake with its superior fit and finish levels. The panel gaps are consistent while the switchgear looks like it’s been picked off a bike from a segment higher.

On the contrary, the FZ’s build quality isn’t up to the mark that it once was -  something that we can now also see on the MT-15 and the R15 V3.0. Inconsistent panel gaps, low-quality switchgear and out of place chrome accents will leave you scratching your head. Also, the indentation on the tank given for the key slot tends to collect water during the rain.

The new split LED headlight on the FZS-Fi looks like a mix between the Yamaha M-Slaz and the FZ25. And while the throw and spread of the headlight is an improvement over the FZ25 and the R15, it still lacks intensity, thus forcing you to strain your eyes.

Aside from this, the bike gets a fully digital instrument console with readouts such as an odometer, dual trip metres, fuel gauge and a clock paired with tell-tale lights positioned on either side. That said, we really wished the console was a bit bigger with more legible fonts as the cramped layout makes it difficult to read it at a quick glance. Other than this, it gets single-channel ABS as standard.

While the headlight on the Apache is a conventional halogen unit, it offers decent throw and spread. However, the RTR 160’s party piece is its digital instrument console which packs features second to none in its segment. The brightly lit console is easy to read and displays a lap timer, 0-60kmph timer, a top speed recorder, service indicator and a clock over and above the conventional readouts. Unlike the FZ, the information is well laid out with the speedometer sitting smack in between and a nifty gear shift light on the top right corner. Single-channel ABS now comes as standard on the Apache RTR 160 4V. However, since our test bike was from the first lot launched over a year ago, it wasn't equipped with the now mandatory safety feature.

The FZS-Fi packs a smaller 149cc motor that’s tuned to produce less power in order to extract more fuel-efficiency. As a result, it lacks punch. And this is pretty evident in the way it puts its power down. It’s less eager to bolt off the line with the power kicking between 4000rpm to 7000rpm, post which the engine starts to feel strained. On a positive note, the refined fuel-injected engine offers brisk throttle response while its 5-speed gearbox provides precise and positive shifts

The Apache RTR 160 4V maybe the faster bike here, shaving off almost a second off the FZ’s 0-60kmph time and a whole 5.74 seconds quicker to 100kmph. But the Yamaha’s meaty mid-range paired with short gear ratios helps it claw its way back into the game with near-identical roll-on times as the Apache RTR 160. That means the FZ has as much usable acceleration as the Apache at city speeds. And that makes it a good urban commuter and the second-most fuel efficient bike in the 150-160cc segment we’ve tested so far.

The biggest talking point of the RTR 160 4V is its engine. It’s the most powerful bike in its segment and unlike anything we’ve ridden before in the 160cc space. The power is delivered in a linear fashion and there’s plenty of mid-range grunt. So much so that the bike can pull from 30kmph in 5th gear without throwing a fit. It’s this tractability of the engine that really impressed us. Be it chugging along in city traffic or pinning it on the highway, the engine always has enough power on tap.

The icing on the cake is its slick 5-speed transmission which offers smooth gear transitions without ever missing a shift. Another big plus is the engine’s refinement which is almost vibe-free throughout the rev range. Vibrations only tend to creep in around the 9000rpm mark, but even that’s ironed out past 10,000rpm. Interestingly, despite weighing 8kg heavier than the FZS-Fi and using a carb as its fuel delivery system, the RTR manages to return the best fuel-efficiency in its class. Needless to say, the Fi variant of the Apache should be even better.

Both bikes use a single-piece flat handlebar. However, the one on the FZ is set slightly higher, and thus easier to reach. Pair this with the somewhat rear-set footpegs and you have a comfortable, upright riding posture which is easier on your back. While the tank feels a bit disproportionate for a bike this small, its carved out knee recesses allow you to lock your thighs on it, making it easy to firmly hold the bike. Besides this, the single-piece seat is well-cushioned and much wider than the RTR 160’s seat, which is a tad on the stiffer side. This means you could spend hours on the saddle without any fatigue. The seat is also set lower at 790mm, which is better suited for shorter riders. Factor in a weight of just 137kg (kerb) and the FZ feels really easy to move around in the city or the parking lot.

The Apache RTR 160 4V leans more towards the sportier side. Its handlebars are positioned slightly lower than the FZ while the footpegs are set higher, resulting in a leaned forward riding posture. But while it’s slightly more aggressive than the FZS-Fi, you can easily cope with it on your daily commutes. A seat height of 800mm is tailored more towards the average bloke. To put things into perspective, I could easily flat foot the bike and I'm 5’10”.

For a small bike, the RTR 160 4V handles like a dream. The chassis and suspension setup offers high levels of confidence when pushing hard into corners. Despite being on the heavier side and having a longer wheelbase, it’s quick to change directions and feels stable while doing so. The bike’s slightly sporty ergonomics also come into play here, it allows you to feel more in control when the bike is leaned over.

That’s not to say that the RTR isn’t any good as a city commuter. Its suspension setup soaks in bumps equally well and irons out most jolts otherwise felt on similarly sporty motorcycles. If we had to nitpick, it would be the brakes. Not only do they lack bite but also feel quite spongy and it shows in the way it comes to a stop from speed. For instance, the RTR 160 4V came to a dead stop from 80-0kmph in 41.51m and managed its 60-0kmph braking distance in 22.20m. On the flipside, the FZS-Fi stopped in just 36.44m and 20.48m, respectively. At this time, we haven’t tested the braking performance of the ABS equipped Apache RTR 160 4V, and we expect it to stop a little shorter than the non-ABS version as the anti-lock system will allow us to go hard on the front brakes with impunity. But we still think it won’t match the braking performance of the FZ.

The FZ, with its shorter wheelbase, feels quite nimble and turns in just as quickly as the Apache RTR 160 4V. The suspension setup feels well-balanced and adds to the bike’s handling prowess. That said, on sharper bumps, the rear suspension tends to transfer shocks to your lower back. Furthermore, the bike's chassis doesn’t inspire the same confidence as the RTR 160 4V. Then again, while the FZ started off as a great handler, it was surpassed by bikes like the Suzuki Gixxer and now the Apache RTR 160 4V, getting relegated to city commutes, which it does fairly well.

We’d also like to point out that the brakes on the FZS-Fi perform exceptionally well. They are progressive and offer good bite, while its single-channel ABS setup makes sure you don’t lock the front end even when you slam on the brake in slippery conditions.

This brings us back to the question we were out to answer: does the 2019 Yamaha FZS-Fi pack enough kit to hold its own against the TVS Apache RTR 160 4V in real-world conditions? The answer is, it simply doesn’t. The RTR 160 4V offers more performance, better features, is more engaging to ride, and easier on the pocket as well. A better value for money proposition we’d say. Besides, at a price of Rs 93,101 for the carb variant, the Apache RTR 160 4V undercuts the FZS-Fi by around Rs 5,000. But in all fairness, the fuel-injected version would set you back by Rs 99,101, which puts it on par with the Yamaha offering. Still, we believe that the TVS is the clear winner here when it comes to offering better value while being more fun at the same time as well.