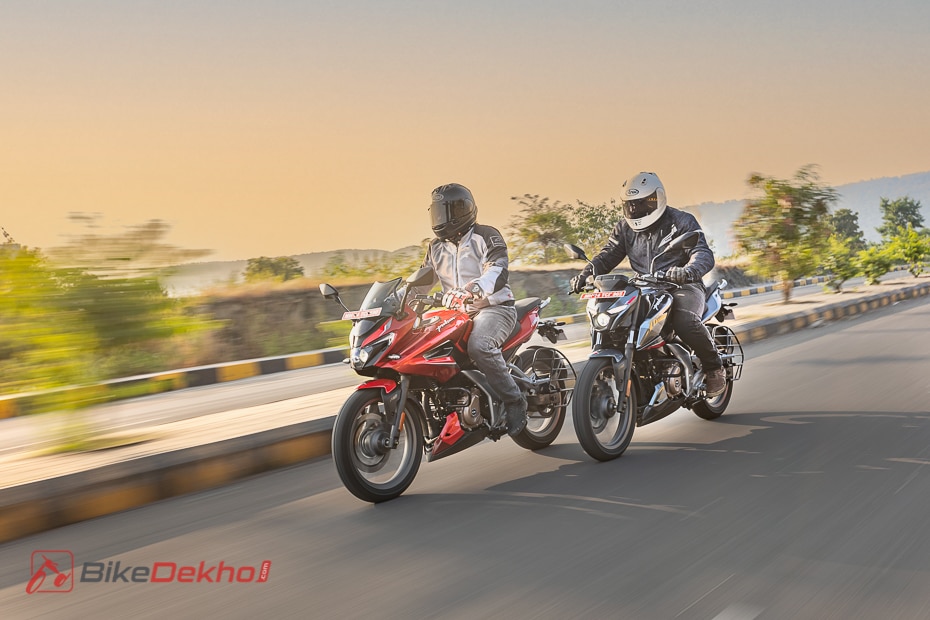 Bajaj Pulsar. It isn’t just a brand or a motorcycle, for many it’s an emotion. Such has been its impact that it’s among the most revered and iconic names in the Indian two-wheeler space. When India entered the new millennium, the Pulsar showed that motorcycles weren’t limited to just commuting, but it can be FUN!

For many enthusiast bikers their first tryst with performance on two wheels was with a Pulsar and as a teenager I had a Pulsar poster on my wall, and I dreamt of owning one. However, over the past many years Bajaj has been neglecting the Pulsar but all that changed with the introduction of the next generation Pulsars 250s: the Pulsar F250 and the Pulsar N250. Can these new offerings revive the Pulsar fervour and more importantly, will they be as aspirational as their iconic predecessors?

Design
With the new Pulsar 250 twins, Bajaj has taken a new design direction. Bajaj designers have evolved the Pulsar styling and the new 250 twins aren’t revolutionary with their form.

The F250 has a half-faired design similar to the Pulsar 220F. Moving on to the face of the bike, it sports a single LED projector headlight with boomerang-shaped LED DRLs and the similarities to the Pulsar 220 is clearly visible. I also liked this large, tall windscreen and the mirrors are wide and foldable.

The fuel tank and the fairing are two separate units but they look seamless. While the graphics aren’t cluttered like the Pulsar RS200, we would have preferred a subtler approach on the new Pulsar 250 twins.

The tail section is chunky and is reminiscent of the Dominar 400, and it gets a split LED tail light that looks good with the new split seat. What I didn't like is the small twin-port exhaust muffler that looks a bit odd and doesn't flow well with the lines of the bike.

The most intriguing design element on the Pulsar N250 is its headlight, again you get a LED projector unit and DRLs, but the design looks more Yamaha than a Bajaj and doesn’t make it unique. The fuel tank shape is the same as the F250 but it gets sharper tank extensions to give it a butch stance. Apart from the above differences, other styling elements are shared between both the Pulsar 250s.

Features
Bajaj continues to employ a part analogue, part digital instrument cluster on the new Pulsar 250s, calling it an “infinity console”(since it has a slim bezel). Bajaj designers have redesigned the layout and just like its predecessors, the analogue tachometer takes centrestage. On the right there’s an LCD display and the Pulsar 250 twins are the first Pulsars to feature a gear position indicator, real-time fuel efficiency and range.

The layout is clean and easy to read on the move. The switchgear has been redesigned too and it’s a backlit unit. Apart from these, the only other noticeable features on the Pulsar F250 and the N250 is the all-LED lighting and the USB charger.

With respect to features, we feel Bajaj has short changed its customers in the pursuit of cost cutting. You don’t get bluetooth connectivity or even turn-by-turn navigation, something that even 110cc scooters boast of these days. In our opinion, this is a big miss from Bajaj as the Pulsar was renowned for introducing segment-first features and setting new benchmarks. In fact, the Pulsar 220F brought along with it 26 new features when it made its debut. So to say we are disappointed with the new Pulsar 250s is an understatement.

Quality
Quality is one aspect that Bajaj products have struggled with. Over the years, the quality of their products has improved, but so have their rivals, who still command an upper hand in this regard. Sadly, the same tale continues with the new Bajaj Pulsar 250 twins. Inconsistent panel gaps are irritating, and fit and finish isn’t worthy of a bike that costs Rs 1.40 lakh and exposed wires are abound.

Credit where due, the quality of welds has improved compared to previous products and the paint finish is also good. Bajaj countered our criticism stating that the bikes we tested were pre-production bikes and the production bikes will have better quality standards. Being an ex-Pulsar owner, the real test of quality for any Bajaj product lies after six months of ownership, so let's see how the Pulsar F250 and the N250 fare in the long run.

Engine & Performance
Powering the Pulsar 250 is an all-new motor that isn’t shared with the Bajaj Dominar 250. In fact, the new engine is much simpler and uses an oil-cooler, a 2V head, and doesn’t even get the triple spark tech. Despite the above, the Pulsar 250 is on par with the NS200 with respect to power and is the torquiest Pulsar on sale.

First thing that you will notice about the new Pulsar is its sprighty acceleration and the bike pulls cleanly off the line. Another impressive aspect is the mid-range performance and the abundance of torque that’s available. Even if you’re riding the bike a gear higher, it doesn’t matter as the bike chugs. The Pulsar 250 can easily do city speeds in 3rd and 4th gear in a stress-free manner. The slipper clutch also makes clutch action effortless and one can easily ride the bike in crawling traffic as well. Bajaj has stuck to a 5-speed gearbox and honestly one will not miss the 6th gear on most occasions. I found the gear shifts to be slick, but shifting to 3rd gear can be notchy sometimes.

On the track we saw a speedo-indicated 143kmph, which when verified with a V-BOX turned out to be 135kmph, impressive we say. The top-end grunt will make the Pulsar 250s an able touring option as well and if you like to stretch the legs of your bike, the Pulsar F250 makes more sense because of the added wind protection. Refinement levels too have improved drastically compared to the Pulsar 220F, however it isn’t the most refined bike out there and it still has that ‘Pulsar vibe’. The vibes aren’t harsh, and more like a buzz that can be felt on the handlebar, footpegs and the seat.

Bajaj claims a fuel efficiency figure of 39kmpl, which is impressive for a bike from this segment. Coupled with the 14-litre fuel tank, one can almost clock 550km on a full tank.

Ride, Handling & Braking
Understandably, riding ergonomics on both the Pulsar 250s is different. With its clip-on handlebars, the Pulsar F250 is sportier, while the slightly rear-set footpeg position is identical on both the bikes. The Pulsar N250 employs a conventional handlebar which makes the riding posture slightly more upright. Both the bikes offer a sporty yet comfortable riding stance. In fact the riding stance on the F250 is exactly similar to the Pulsar 220F, the only difference being the more accommodating fuel tank recess and the more spacious saddle. Seat height is low at 795mm and it’s amplified by the fact that the seat is narrow, so shorter riders won’t be uncomfortable.

Apart from a new engine, the Pulsar 250 duo also feature a new tubular chassis that is lighter and stiffer than the perimeter frame (NS200)  and the diamond type unit (Pulsar 220F). Additionally, the new wheels are 1kg lighter than the one found on the Pulsar NS200 and all these weight savings have resulted in the Pulsar 250s being the heaviest Pulsar to ever go on sale. Weird, right? Guess that’s the Pulsar way.

Moving on to the handling, the Pulsar F250 felt easy to steer and planted on the track. It isn't as precise as the Yamaha R15, but for what the bike is, the Pulsar 250 didn’t feel awkward on the Bajaj test track. As for the Pulsar N250, I felt the front end to be a bit nervous and it could do with more feel and feedback. On city roads, both the bikes felt agile and easy to steer. However, if Bajaj had been able to keep the weight in check, the Pulsar 250’s high-speed handling dynamics could have been better.

What really impressed me about the underpinnings of the Pulsar 250 is the ride it offered. Broken roads, speed bumps, potholes, the Pulsar 250’s suspension soaks up everything in a very composed manner. In my opinion the Pulsar 250 offers the best ride quality for any Pulsar on sale. Only over sharp bumps does the rear suspension feel a bit unsettled.

The front brake calipers on the Pulsar 250 are supplied by Grimeca, an European brand whose products are being manufactured under license by Endurance in India. Braking performance is good, with decent bite and feedback through the lever. However, the Pulsar 250 doesn’t get dual-channel ABS even as an option and that’s disappointing given the performance available.

Verdict
Before talking about the verdict, let's get the pricing out the way. At Rs 1.40 lakh and Rs 1.38 lakh, the Pulsar duo aren’t setting any new benchmarks for value and in fact, the Yamaha F25 is cheaper. Coming back to the bikes, if you were planning to buy the Pulsar 220F, it’s a no-brainer: spend the extra cash and get the Pulsar F250. It's much quicker, comfier, faster and well worth the small premium that you will shell out.

Things aren’t so easy and clear for the Pulsar N250. It’s Rs 5,000 more expensive than the Pulsar NS200, which not only offers you better tech but also has a 6-speed gearbox and in our opinion is a better Pulsar. It gets even worse when one brings the TVS Apache RTR 200 4V into the picture as it offers better tech, more features, dual-channel ABS and also adjustable suspension. As you can see, the Bajaj Pulsar N250’s positioning is confusing for us and also the customers.

With the new Pulsar 250, Bajaj have made tremendous improvements in refining the Pulsar brand and the engine is the highlight of the motorcycle. However, there is one big problem and that’s timing. In the presence of advanced rivals, the Pulsar 250s feel a bit old and even Rajiv Bajaj feels that the new Pulsars are around four years late, and we couldn’t agree more. Pulsars are supposed to be disruptors and not be just another offering and therein lies the issue with the Pulsar 250 for me. It’s a good bike, sure, but will it be a wallpaper on the smartphone screen of the current generation youngsters? I don’t think so.