The new faired Pulsar 180 sits bang in the middle of the naked Pulsar 180 and the Pulsar 220. Does this new motorcycle offer the best of both worlds then? 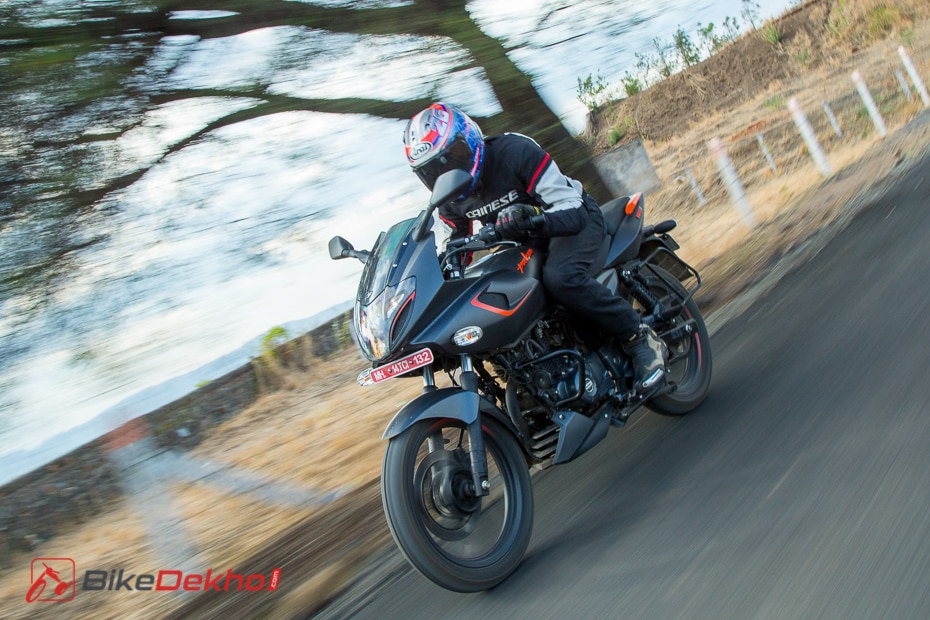 Introduction:
Bajaj Auto has always had this unique modus operandi of offering features from its higher capacity bikes on its lower capacity models. Its latest and most outrageous example is the Pulsar 180 Neon which gets a quarter fairing from the larger Pulsar 220. This has been done to rejuvenate sales of the Pulsar 180 which has been on the decline since the past few months. However, the new update also brings in a price hike. The faired Pulsar 180 costs Rs 9,267 more than its naked variant. That’s not a small amount by any means. But that also means the new Pulsar 180 Neon is Rs 11,792 more affordable than the larger Pulsar 220. Does the new Pulsar offer the perfect middle ground between the standard 180 and the 220 then?

The Pulsar 180 Neon looks exactly like the larger Pulsar 220. However, the smaller Pulsar gets a unique matte grey paint job with orange accents on the badge, inside the fairing vents and on the split grab rails. Then you have the exhaust end can from the Pulsar 180 series which is not as beefy as the Pulsar 220’s. Paint quality is quite good as is the switchgear quality that has improved a lot from the first generation Pulsars. The instrument console is the same semi-digital setup but gets a faux carbon fibre surround and a new background for the tachometer. There was a small creaking noise from the fairing on our test bike, but from experience of having owned a Pulsar 220, I can tell you that it is an easy fix. In fact, the panels on this fairing are known for not coming loose easily.

The Pulsar 180 Neon gets a large 15-litre fuel tank and has a ground clearance of 165mm  which should help it clear the largest of speed breakers easily.

The Pulsar 180 Neon is a compact motorcycle with the clip-on handlebars placed closer to you. Its low seat and mid-set footpegs mean the distance between the two is less. This works fine if you are below 5’8”, beyond which it could get uncomfortable as your knees are bent more than usual while riding the bike. Speaking of riding position, you sit fairly upright. This works well for long distance rides. The split-seat is wide and though the cushioning is a tad on the softer side, it offers enough comfort to travel long distances with less stops. The pillion too has a comfortable perch thanks to the long seat and split grab rails.

The addition of a fairing should help with touring right? In some ways, it does. The bright headlamp will definitely be a boon on the highway. However, the low-set windscreen isn't of much use unless you are tucked in behind it. Also, unlike the larger Pulsar 220 that feels planted at speed, this bike is affected by crosswinds.

The biggest update the Pulsar 180 Neon receives in terms of features is the new projector headlamp setup. On the Pulsar 220, the headlamp offered the best-in-class lighting in terms of beam intensity and spread. These halogen lamps with the projector setup offer the same value on the smaller Pulsar. Other than that, the Pulsar 180 Neon gets LED tail lamps, clip-on handlebars and a semi-digital instrument console with a fuel gauge and warning for the side stand. It, however, misses out on a gear position indicator. In our opinion, the previous orange-backlit instrument console was easy to read in the dark than the current blue-backlit one.

For safety, the Pulsar 180 Neon gets a single-channel ABS as standard fitment.

In our Vbox performance tests, the Pulsar 180 Neon did the 0-60kmph run in 5.54 seconds. That makes it slower than most 160cc bikes and even the Gixxer SF. However it is not just the extra weight, but also the relatively taller gearing that makes the Pulsar 180 Neon slower off the line. However, thanks to its extra capacity, the Pulsar 180 posts a respectable 0-100kmph time of 15.88 seconds.

The motor makes most of its power higher up the rev range, hence its roll-on figures in third gear are way better than the one in fourth, where the motor is spinning most of the time in the lower part of the rev range.

What the taller gearing does though is that it gives the Pulsar 180 Neon relaxed cruising ability at speeds of 80-100kmph. At 80kmph, the motor is spinning at a relaxed 5800rpm in fifth gear and at 100kmph in top gear, the rev counter points to 7200rpm. This relaxed nature also allows the bike to offer a highway fuel efficiency figure of 47.86kmpl which is similar to the smaller Pulsar NS160.

This is a refined motor. The only time you feel vibrations in the form of a small buzz on the handlebars is at 80kmph and on the fuel tank at 100kmph. The gearshifts are fairly light and slot in with a positive feel.

Overall, the motor is a relaxed unit and feels more adept at cruising rather than offering much in terms of excitement.

The Pulsar 180 Neon carries forward the same double downtube frame as its naked cousin. It has the same architecture as the first Pulsar, but has seen a lot of updates since then. For suspension, you get telescopic forks and twin gas-charged shock absorbers. The suspension setup is on the softer side and offers a pliant ride at both low and high speeds. However, large potholes do upset the bike but it does a fairly good job of filtering out the road harshness and sharp edges.

While the naked Pulsar 180 is an eager handler, the addition of a fairing means you feel the extra weight while turning at low speeds. However, the weight isn't enough to bother you, rather something you get used to. While the steering isn't lazy, it isn't as quick as say a KTM or the R15 V3 either.

In wide, sweeping corners, the Pulsar 180 feels composed and takes small undulations in its stride. However, the added weight of the fairing, the soft suspension setup and MRF Zappers do not instil confidence to push the bike to its limits. It's a good thing that the motor’s relaxed power delivery will seldom get you in trouble in the twisties.

With the new single-channel ABS setup, the Pulsar 180 Neon also sees an upgrade from its previous 240mm front disc to a new 260mm disc. Like most Pulsars, the brakes provide a progressive feel and ample bite. Under hard braking, the soft front end, coupled with the extra weight of the fairing results in considerable dive causing the rear wheel to lighten up and break traction easily. The ABS setup, however, does a commendable job of keeping the front wheel in check and isn't too intrusive.

Overall, the Pulsar’s suspension is tuned for comfort and is more at home in the city and highway rides than on the racetrack.

Verdict:
So what exactly does the Pulsar 180 Neon offer? The addition of a faring and headlamp from the larger Pulsar 220 does give the Pulsar 180 Neon a sense of premiumness. It also enhances the Pulsar’s touring capability, not so much by way of the fairing, but thanks to the brilliant new headlamp setup. Also, the unique colour scheme will help you stand out in a sea of Pulsars, the 220 included. But, for around Rs 3,610 more, you have the fully-faired Hero Xtreme 200S which offers more features and performance. In comparison, the Pulsar 180 Neon feels overpriced.