Published On Jul 9, 2022 By Arun Mohan Nadar for TVS Ronin 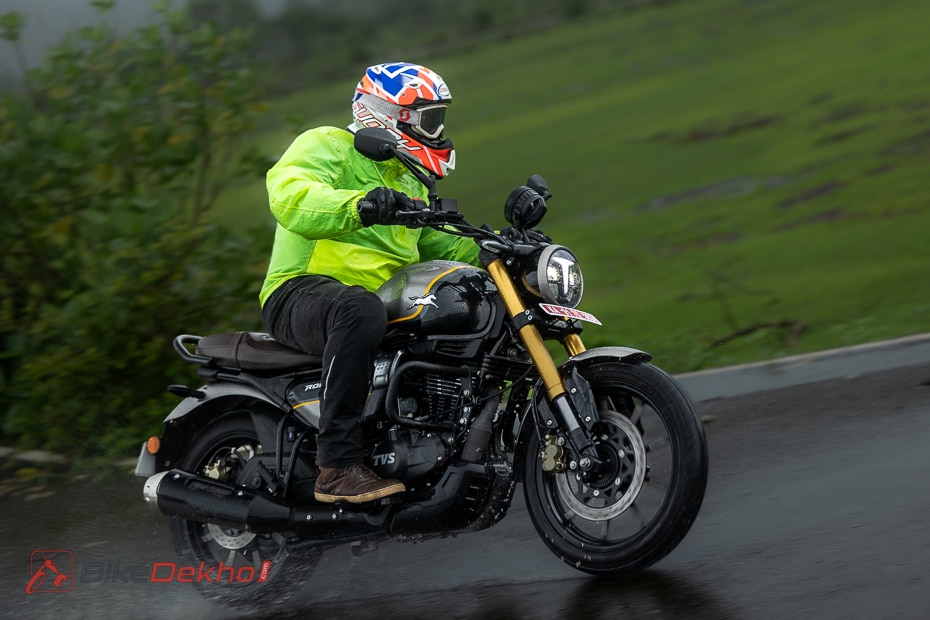 When in 2018 TVS revealed the Zeppelin concept motorcycle it did raise a lot of eyebrows. As good and interesting the TVS Zeppelin was as a concept and a product, there was one big problem and that was connection with the brand. TVS had never ventured into the cruiser segment, and the brand’s products always played on its racing heritage. After making us wait for four years, TVS has launched the new Ronin, a bike based on the same concept. So the TVS Ronin isn’t a cruiser, but it’s neither a scrambler or even a roadster, it’s TVS’ first attempt in the retro motorcycle segment. We got to ride the new TVS Ronin for a short time on the scenic roads of Goa with a downpour for company.

Design & Features
Let’s commence this article with the first aspect of the Ronin that will grab your attention and that’s its styling. As you can see, the Ronin has taken design elements from varying genres: there’s a bit of cruiser, dollops of scrambler, a dash of roadster and even a sprinkling of commuter. This makes the styling confusing, to say the least. Also, while the front of the bike looks modern and something designed by a professional designer, the rear looks like something designed by an intern.

Old-school styling elements are cool, but the execution of the tail section with the disproportionate mudguard and the crude grabrail is a let-down. Having said that, in isolation, the design elements like the round LED headlight, gold finished fork, large tank, and the exhaust muffler all look good, but when they combine, the overall styling looks odd. Adding to the woes of the Ronin are the 17/17-inch alloy wheels; had TVS opted for a 19/18-inch wheel setup, the Ronin would have got a more imposing stance.

The TVS Ronin features an off-set circular instrument console (LCD display), which is the norm on any scrambler. The cluster displays a ton of information such as a speedometer, tachometer, gear position indicator, distance to empty, average speed, fuel gauge, two tripmeters and an odometer. The top-end Ronin TD also gets connected features such as voice assistance, call and message alerts, turn-by-turn navigation and ride analysis data via an exclusive Ronin app. So in terms of features, the Ronin is right up there with the best.

Being a TVS product, fit and finish levels are spot on. Panel gaps are tight, paint finish is top notch, while the switchgear quality is robust.

Powering the Ronin is the most powerful engine built by TVS indigenously. The 225cc engine is based on the TVS Apache RTR 200 4V and shares the same bore, but the stroke is longer and the engine has been reworked to suit the bike’s characteristics and improve efficiency. Acceleration is good, the Ronin isn’t outright quick, but not slow by any means. The most impressive bit for me was the tractable nature of the engine as I was able to carry speeds as low as 30kmph in 5th gear.

One will rarely find themselves in the wrong gear, as the torque helps you pull through, and this easy-going nature should make it a very good commuter on city streets. TVS claims a top speed of 120kmph for the Ronin, but given the limited time and the tight roads of Goa, we couldn’t test this claim, but the bike felt vibe-free till 90kmph, post which mild vibes do creep in. How the bike performs on the highway, its stability and other details will be covered in our road test article.

Ergonomics of the Ronin are also relaxed with a centre-set footpeg and easy to reach handlebar. At 795mm, the seat height is also accessible for riders of varying heights. Despite running a long wheelbase, direction changes on the TVS Ronin are quick, and amplifying its nimble nature is its low kerb weight of 160kg. The TVS Remora block-pattern tyres also offered good grip on the wet tarmac and the bike feels composed.

The TVS Ronin is offered in two variants, single and dual-channel ABS, we rode the dual-channel ABS and the intervention of the ABS unit wasn’t abrupt. The brakes do a fine job, but a tad more bite from the front disc brake would have been appreciated. Both the ABS variants are offered with two modes - Urban and Rain, but how these two modes perform will only be revealed post a road test.

Prices for the TVS Ronin start at Rs 1.49 lakh (ex-showroom Delhi) and at this price it does offer a great VFM. Based on our first ride experience, it does feel like a well-rounded motorcycle. The torquey motor makes riding relaxed, the low kerb weight and chassis balance endows it agility, while the premium quality levels is an added bonus. The connected features, dual-channel ABS and the better colour options of the Ronin TD variant does kind of justify the Rs 20,000 premium, but it would have been even better if the premium would have been Rs 15,000. However there are two issues that I have with the bike, first is the confused design, but then again style is always a personal choice.

The more major one is that the Ronin doesn’t have the wow factor or the emotional quotient that one associates with most TVS products. It does everything in a clinical manner, which has its merits, but for some riders this can dull the experience a bit. As a first attempt in the retro segment TVS has done a great job with the Ronin and even tried to take an unique approach. So if you love retro but also appreciate modern engineering the TVS Ronin should be on your wishlist.