Published On Nov 2, 2019 By Benjamin Noel Gracias for Jawa

For many, the Jawa brings back fond memories of the original. Is it worth the long waiting periods it commands? 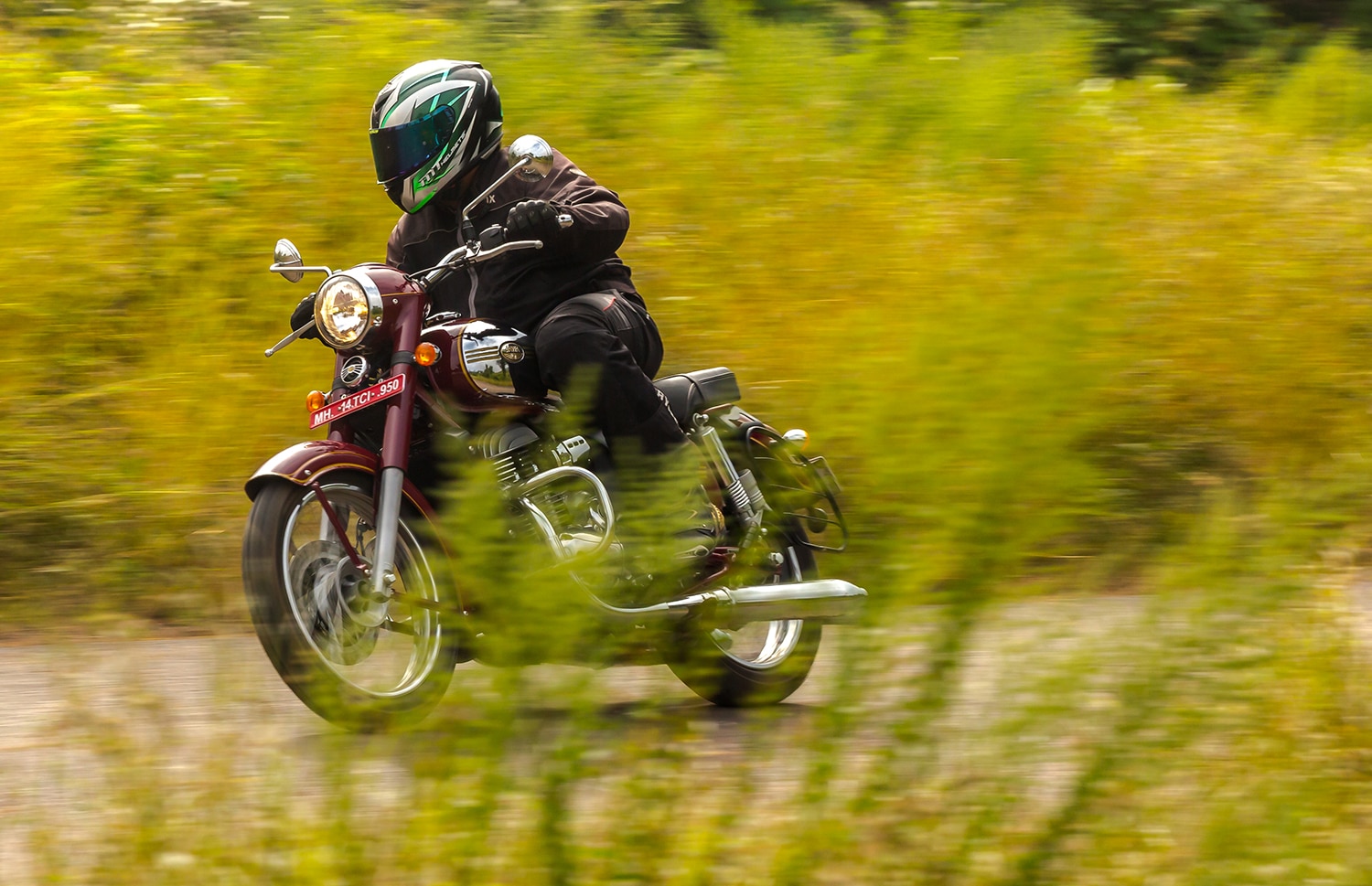 There are few motorcycles that evoke nostalgia amongst Indian two-wheeler enthusiasts like the Jawa. The original two-stroke Jawa offered thrills to the Indian rider of the 60s post which its legacy was subsequently carried forward by Yezdi - the Indian adaptation of the Czech brand.

Classic Legends has revived Jawa or the name at least. The bike offers old school styling but has a modern powertrain and underpinnings for better performance and reliability.

The question is does the Jawa offer the charm and thrill of the original? And given the excessively long waiting period it commands, is the Jawa worth the wait?

Classic Legends has done a fantastic job of replicating the details of the 60s Jawa 250 Type 353/04. The attention to detail is incredible with parts like the headlamp, horn, instrument console, seat, side panels, fenders made to look exactly like the older bike. To preserve the old school theme, even the LED tail lamp is hidden behind a red translucent lens. The best design bit though has to be the motor. This modern liquid-cooled unit has been designed to look like an old-school air-cooled motor The radiator is well hidden and the air fins mimic the lines of the original. Even the twin exhausts look like they were picked off the original Jawa. Overall the Jawa is an attractive motorcycle and its design is true to the original.

That said, up-close you notice a few niggles. The paint quality feels uneven in places like the fenders. Overall though, the Jawa feels well put together and some parts like the side panels and the switchgear feels well built. Dimensions-wise the Jawa is smaller than its retro competition like the Royal Enfield Classic 350 and Benelli Imperiale 400 but it definitely is the most attractive motorcycle of the trio.

The compact dimensions make the riding position feel cramped for the lower body especially if you are over 5ft 8in tall. Shorter riders will appreciate the low seat height and its narrowness which makes it easy to place both feet on the ground. That combined with the Jawa’s low kerb weight makes it quite easy to push the motorcycle around a parking lot. You will not appreciate the seat cushion which is on the softer side and causes discomfort after half an hour on the motorcycle. Even your pillion, big or small, will grumble about the lack of space and the uncomfortable seating position due to the low seat and grab rail hidden under it. On the plus side, the wide handlebars are easy to reach and offer good leverage. However, the round chrome mirrors offer little side visibility.

The Jawa offers old-school lighting in the form of a bulb-type headlamp and turn indicators. It does get some form of modernity in the form of an LED tail lamp. The halogen headlamp offers surprisingly better throw, spread and intensity than some of the modern LED units we have tested. It has a very basic instrument console with an analogue speedometer, analogue fuel gauge and a digital odometer. Surprisingly the Jawa does not get a trip meter. Like the original Jawa, the round console sits flat on the headlamp unit. The fuel gauge is erratic and is not something you can trust.

The speedometer is unique as it starts at the 2 o’clock position like on vintage British motorcycles. That’s surprising since the original Czech Jawa had its speedometer start at the conventional 8 o’clock position.  It looks fantastic but is difficult to read with the bottom 60kmph to 100kmph numerals hidden from view. Even the white backlighting combined with the yellow background is a bad combination and makes the console fairly unreadable at night.

The Jawa looks proper old-school but has modern tech like liquid-cooling, DOHC, fuel injection and even a slipper clutch.

The gorgeous liquid-cooled single-cylinder motor finds its roots in the Mojo. So instead of bottom-end grunt, the modern motor offers usable mid-range performance. This motor is a short-stroke unit which revs quicker and behaves quite different than the old-school type long stroke motors found in classic motorcycles. So if you are looking for that slow revving, laid back classic bike feel or exhaust note, you will be disappointed. The Jawa’s motor sounds coarse and even the twin exhausts do not sound anything like the original Jawa.

Where the motor shines is in the performance department. Its high revving nature and healthy power-to-weight ratio allow it to post acceleration times that are more or less on par with the non-retro 250cc-400cc motorcycles. The Jawa offers sprightly acceleration upto 60kmph but loses steam on the run upto 100kmph. The motor feels focused towards offering good mid-range grunt and in the process sacrifices some bottom end.

The Jawa works well when there is free-flowing traffic. It is evident in the roll-on times which is on par with larger, more powerful motorcycles. Now the Jawa has excellent mid-range but its motor isn't tractable and you do have to shift gears in the city to keep it in the powerband.

Out on the highway, the Jawa is more comfortable cruising at 80-90kmph. At those speeds, there is a mild buzz on the fuel tank and handlebars and vibrations are limited to the footpegs. You can ride the Jawa above 100kmph but at those speeds, the motor begins to feel strained. Also, at speeds of around 80 to 90kmph, you need to shift down a gear or two from 6th for quick overtakes. It also affects its highway fuel economy. That said, with its 14-litre fuel tank the Jawa should be able to do close to 500km on a tankful out on the highway.

Overall, the Jawa is quick but its motor lacks character. It feels a bit generic to ride and also lacks the refinement of other modern motorcycles.

The Jawa has modern but simple underpinnings. It gets a double-cradle frame supplemented by conventional forks and dual gas-charged shock absorbers. The suspension feels pliant. While at slow speeds the suspension filters road undulations well. At higher speeds, the short travel suspension bottoms out easily overs bumps and sharp ridges.

The Jawa feels quite nimble and easy to ride in traffic thanks to it being lighter and it having a front end that’s eager to turn in. That said the steering feels slightly on the heavy side especially when getting it straight after a turn. The Jawa feels confident while tackling corners. It comes equipped with MRF Zappers that grip well in the dry but do not inspire confidence on wet roads.

The Jawa’s brakes offer good bite and brakes well considering the fact that it misses out on a rear drum brake and gets just a single channel ABS setup. Jawa does offer a rear disc, dual-channel variant of the motorcycle as well and we will be testing that soon.

The Jawa gets two variants: single disc (Rs 1.64 lakh ex-showroom, Delhi) and dual-disc (Rs 1.73 lakh). It also comes in a special 90th Anniversary limited edition variant that gets a special anniversary colour scheme. Only 90 bikes are available, the owners of which will be selected via a lucky draw. Pricing is the same as the dual-disc variant.

Classic Legends started off with the right idea. Build a motorcycle inspired by the original Jawa that enjoys a cult following even to this day. It has succeeded with the design. The Jawa looks like the original. Does it manage to feel as special as the original? The answer is no. Retro motorcycles have charm and despite being low on performance, have something to offer that tugs at your heart. It can be the way it rides at 80kmph or the way it accelerates at a certain rpm, or even simply the sound it makes. Unfortunately, the Jawa’s riding experience feels modern - in a generic way!

That does not make the Jawa a bad motorcycle. It feels more modern than the competition, is easier to ride in the city, easier to park and has lighter controls. The Jawa does impress but just not in the way you would expect from a retro motorcycle.

Who is it for then? The Jawa makes sense for someone looking to join the classic bandwagon but not wanting to sacrifice on performance. It will get you from point A to B quicker than other similarly priced retro motorcycles. But, we think, it won’t be able to make the ride itself feel special - at least as special as the bike looks.

When launched, the Jawa did have the hype to take on its best-selling retro competitor, the Royal Enfield Classic 350. However, it did miss out on that opportunity with its excessively long waiting periods which left a bad taste in the mouth of potential buyers. All things considered, is the Jawa worth the inordinately long waiting period? We are not entirely convinced!