The year was 2005 and back then, this company was called Hero Honda. It was a time when, the only way 2 wheeler companies were getting sales was manufacturing mileage efficient bikes. It was a time when most of the bikes looked similar in shape and styling, when Hero Honda launched Glamour. In 2008, the bike got upgraded and Programmed Fuel Injection (PGM-Fi) was introduced in the bike, giving Glamour the honour of being the first bike employed with fuel injection.

Currently, the bike is still going strong in the Indian market and comes in two variants - the standard version and the PGM-Fi enabled one. 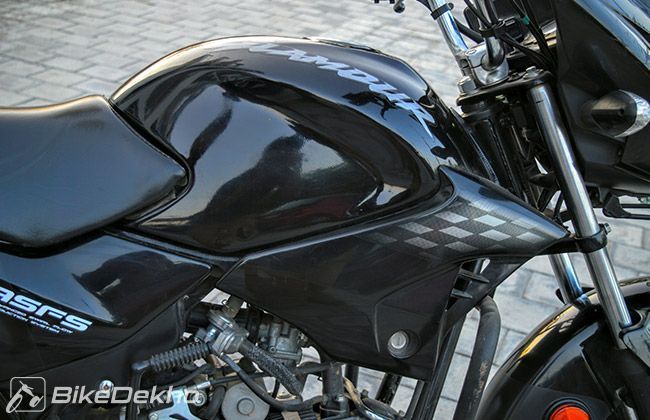 Over the years, the 125cc machine went through several cosmetic changes to suit the changing taste of Indians. We tested the machine on straight empty roads and in heavy traffic. This is how Glamour performed when put under several checks.

When Hero Honda Glamour entered the Indian market, an entire auto industry was amazed by the pleasant looks and detailing done on the machine. The bike has received some impressive changes in last few upgrades, reflecting the manufacturer’s philosophy to bring change with time. The headlamp section is revised and now it is more compact than the initial versions. Its aerodynamics have been improved and the 125cc machine looks even more appealing than before. Other elements in Glamour remains the same. The bike still comes with the chequered flag inspired body graphics that make it looks like a premium 125 cc motorcycle. Clear lens indicators have been added to the package and Hero has maintained the all-black theme in Glamour.

The switches on the Glamour are same as rest of the utility bikes from Hero. The left switch box contains buttons for horn, lights, indicators and a pass switch while the electric start button finds its position on the right one. Its handlebar is wide and the foot rests are placed at the right position giving the rider a comfortable sitting posture. Talking of instrumentation, this section has really improved over the years and the new Glamour now flaunts a digital display on the cluster that houses odometer, trip meter and fuel gauge. The speedometer is positioned in the centre that look pretty impressive with multi colours and bold fonts.

The engine in Glamour has remained unchanged since its inception and it comes loaded with a 124.7cc, four-stroke, air-cooled engine that cranks out a maximum power of 9 bhp at 7,000 rpm along with a peak torque of 10.35Nm at 4,000rpm. The four-speed constant mesh gearbox comes with a slightly taller gearing in comparison to the usual commuters that gives it a ‘fun to ride’ factor. Glamour’s engine has a good mid-range torque due to which the bike feels quite effortless after gaining some speed. After pushing hard, it reaches a top speed of over 90kmph relentlessly. Talking of fuel economy, Glamour returned an overall fuel economy of 56kmpl which is not that bad considering its 125cc heart.

Built on a double cradle frame, Glamour comes with a good handling and dynamic stability. With telescopic forks upfront and twin spring aided shock absorbers at the rear, the bike provides a satisfactory ride quality and comfort which is acceptable as you cannot expect much from a 125cc commuter motorcycle. Hero has equipped the bike with 2.75 x 18 – 42 P/ 4 PR front and 2.75 x 18 – 42 P/ 4 PR rear tyres that have a good adhesion property and hence offer superior grip. The 130mm drum brakes installed at both ends aren’t top notch but proves really beneficial in case of an emergency.

The new Hero Glamour will give you a decent fuel economy but it lacks that punch you will expect from a 125cc motorcycle. However, if you want the reliability and trust of country’s largest two-wheeler manufacturer, Glamour will never disappoint you for sure. With a price tag of Rs. 55,925 for the drum brake version and Rs. 57,925 for the disc brake variant (ex-showroom, New Delhi), Glamour perfectly justifies the value for money statement and is worth every penny. Moreover, the bike comes with a promise of low maintenance costs and an engine that can last for decades. What else the common masses asks for! Glamour is a good answer for those who crave for almost  everything in a low budget bike.