Can some new bits and bobs make the funky Jawa roadster more appealing than before? 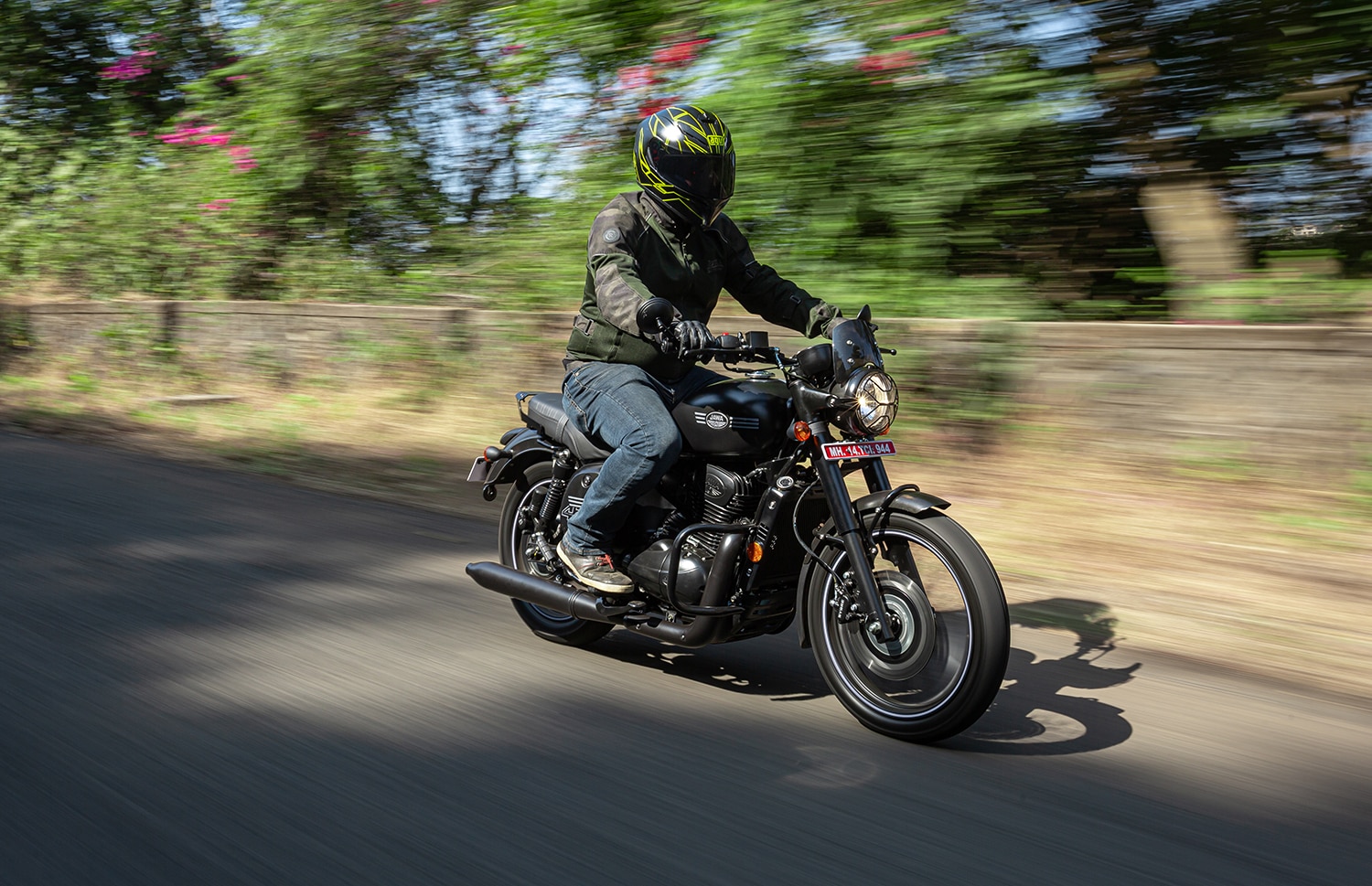 It has been over two years since Jawa made a return. Aside from evoking nostalgia from those who had seen the brand in its heyday, Classic Legends also managed to pique curiosity among those who had never heard of Jawa or were too young when the brand shut shop. Of the first two bikes launched, the more affordable Forty Two was the go-to motorcycle for the majority of the buyers, those who eventually got their bikes after waiting patiently for them that is. Not only because the Forty Two was priced lower than the Jawa but also because of its more modern appearance.

A couple of years on, Jawa has decided on giving it a small but significant update. Meet the Jawa Forty Two 2.1, the new range-topping variant of the Forty Two series. What exactly has Jawa thrown into the mix now to make it more premium and more importantly, is it any better than the standard bike?

There’s no getting around the fact that Jawa makes good looking motorcycles. The Forty Two 2.1 is virtually the good old Forty Two with alloy wheels and bar-end mirrors as standard fitment from the factory floors along with three new colours to boost its youthful appeal. Much like the standard Forty Two, the names of these new colours too reference the ‘Hitchhiker’s Guide To The Galaxy’ and bear astrological connections: Orion Red, Sirius White and Allstar Black.

Each of these bikes get an asymmetrically-applied grey racing stripe running down the length of the fuel tank and rear mudguard. The Jawa logo, the stripes surrounding it on the fuel tank and the name of the bike, which now appears in numerals and not “Forty Two,” are also finished in grey. Even the rim tapes on the black alloy wheels are grey with the Classic Legends and ‘42’ logos strewn into the mix.

The entire dark treatment of the mechanical elements also works in favour of the bike. Paired with the contrasting white body, the Forty Two 2.1 looks smashing. The matte black finish is pretty consistent all across the bike, be it on the engine case, fins, exhaust covers or even the fork sleeves. The alloys aren’t machine finished but one of the spokes bears a “Jawa Original” moniker, which is a great touch.

Jawa has stepped up its game by delivering a well finished and neatly packaged motorcycle. The tank lip has blunt, well-rounded edges; loose wiring is nowhere to be found and the panel gaps are pretty consistent. Even the exhaust shield that runs from the header to the mid-section is a single-piece unit that looks cohesive, unlike the ones that we have seen on the Perak. On the black colour version, there are metallic flakes that shine subtly in bright daylight, giving it a slightly more premium appeal.

While it is a step in the right direction, Jawa has managed to only match the quality standards set by the Royal Enfield Classic 350, not exceed them. The segment benchmark has been set by the likes of the Royal Enfield Meteor 350 and the Honda H’ness CB350, against which the Forty Two doesn’t quite seem to match up. Considering that it took Jawa just two years to improve quality standards dramatically, we guess that they should get there really soon.

There are no changes to the rider’s triangle. It gets the same wide flat drag-style handlebar. The seat is an easily-accommodating 765mm with the pegs set neutrally. While the recipe hasn’t changed, you do feel a bit awkward when you first sit on the well-cushioned saddle. The bars are a bit too low and quite close to the rider. The pegs are a bit on the higher side. The posture isn’t uncomfortable, but it just feels a bit unnatural.

One improvement here though is that the thicker foam density for the seat cushioning now feels a lot better padded. A heavy-set rider especially won’t sink to the seat pan anymore. It might feel a bit firm initially but in our experience, firmer seats end up being more comfortable when spending long hours in the saddle.

There’s isn’t much to speak of here, Jawa still shying away from LEDs and other such modern elements for the Forty Two. All lighting systems use conventional bulbs and the same old school analogue dash still exists.

There are small improvements with the console itself. The digital inset now displays two tripmeters, which can be toggled through via a button located below the engine kill switch. One of our qualms with the retro inverted Jawa layout of the speedometer has been solved to a certain extent. While it wasn’t as much of an issue on the Forty Two, reading exact speeds between 40kmph and 120kmph was extremely difficult on the Jawa and the Perak. There is one more inset speedo readout ring now in the dash that displays speeds between 50kmph and 150kmph.

Right off the bat, the new Jawa doesn’t feel as sprightly as it did earlier. While we will have to wait for official test numbers to quantify the difference in performance, the sporty nature of the motor seems a little subdued.

But that is a good thing. Confused? Well, the torque is spread more evenly across the rev range now, allowing you to ride at moderate speeds in slightly higher gears now, something that wasn’t possible earlier.

Don’t go expecting this engine to pull away from 40kmph in sixth. What it can now do is allow the rider to sustain city speeds of 40-45kmph in fifth gear without much engine shudder. And even if you lose momentum, you do not need to work the gearbox as much to get back up to speed. Just going down a cog should do the trick.

Gear shifts aren’t particularly slick; they sometimes feel a bit notchy. The lack of slipper clutch is evident here as we feel clutch action isn’t as effortless as it could be.

One highlight of the 293cc engine is the distinctly sporty exhaust note, which went missing on the larger 334cc motor of the Perak. Jawa has managed to skip the middle collector box for the catalytic converter altogether for this engine. It manages to run a two-into-two setup, which makes sure there is enough rumble present in the system.

Jawa hasn’t tinkered around with the suspension setup much here. It uses the same telescopic fork and twin gas-charged shocks. These are set up on the firmer side, which means that you tend to feel every small ripple or undulation on the road at slow speeds, which were aplenty during our ride. The ride settles down as you gather pace, with the shocks filtering out most road imperfections. It’s only when you encounter sharp bumps that you need to be extra cautious. The quick rebound setting of the twin shocks can unsettle the bike and toss the rider off the seat.

Handling has always been a strong trait of the Jawas and the Forty Two 2.1 is no different. It is incredibly light on its feet, which is great for dodging potholes and slicing through traffic. When you do show it a set of corners, it manages to keep you hooked from one apex to another. And despite having a short wheelbase, the Forty Two 2.1 remains planted when leaned over.

It does remind you of its cornering limitations though. Ride spiritedly and the side-stand starts grinding on the left side. You can carry a few more degrees of lean into right handers but not much. The damage done on the right side can be more serious though, as you end up grazing the exhaust and the circlip that joins the exhaust pipe to the muffler.

Braking performance is predictable and not too overpowering, but we would have liked for a bit more lever feedback. ABS intervention is consistent and not too intrusive.

With the Forty Two 2.1, Jawa has managed to make its sporty roadster even more youthful. The eccentricities of the motorcycle, like its weird riding posture and limited cornering clearance, still exist. But what Jawa has managed to do is polish off the rough edges, improve the build quality of the bike and introduce extra convenience via the alloy rims. The engine is a lot more usable now, making this a hassle-free commuter.

But there’s no getting around the fact that you end up paying Rs 6,785 over the premium colour versions of the dual-channel ABS variant of the standard Forty Two. The bike doesn’t justify the steep premium for just a few additional bits and bobs. For the same asking price, motorcycles like the Honda H’ness CB350 and the Royal Enfield Meteor 350 are offering a richer experience thanks to more modern tech and features.

Also, we haven’t heard too many confidence-inspiring stories about the longevity of Jawas with parts corroding and rusting quite rapidly. Even spares aren’t easily available, or so we’ve heard. Hopefully, in the coming year Jawa gets its act right here as well, just like it did with the fit and finish of the bike.

Hence, while we don’t have much hesitation in recommending the Forty Two 2.1 whole-heartedly as a motorcycle, its price tag and after sales experience do leave a little to be desired.