Published On Jan 3, 2021 By Jehan Adil Darukhanawala for BGauss B8

Can this affordable electric scooter get you off internal combustion? 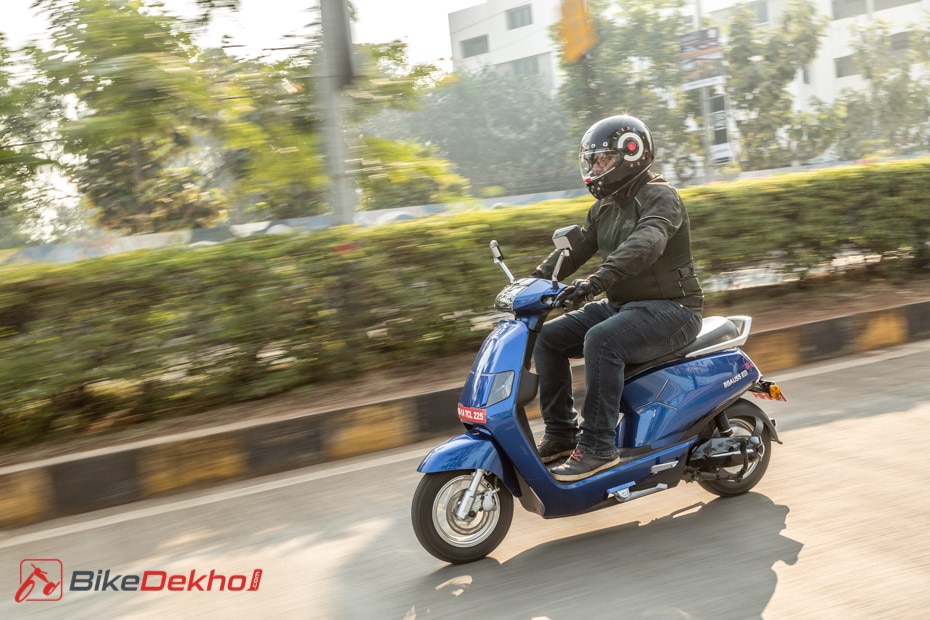 BGauss is a relatively new entity in the electric two-wheeler space. We wouldn’t be surprised if you haven’t heard of them. But have you seen Akshay Kumar on your TV screens promoting quality wiring from RR Kabel? Yep, the same global conglomerate that makes wiring, solar energy panels, and other sustainable energy solutions has created a new electric two-wheeler division.

BGauss currently offers two electric scooters, the A2 and the B8, each available in a couple of trim levels. We recently spent some time with the B8 Li, which is the mid-spec option of the more performance-packed offering from the company. It is priced at Rs 82,999 (ex-showroom India) and packs a few nifty features. Can this be our pick of the lot in the affordable electric scooter space?

The BGauss B8 looks particularly European, which is surprising as the scooter is sourced from China and assembled in India. There isn’t too much flashiness or edginess on display. Still, it manages to spark curiosity amongst passersby, turning a few heads for a second glance along the way. The front end is quite slim and a tad boxy.

We are particularly impressed with the design of the LED headlight. It sort of looks like the coils on a transformer wrapped around a core. The front turn indicators are integrated into the apron with a Y-shaped styling element reminiscent of signature design bits found on Lamborghinis. Even the side panels get the same Y-shape chrome accents. The scooter is quite sleek, one of the slimmest we have ridden in a while. There’s a nice thick grab rail completing the rear.

We adore the sophistication in the design of certain parts of this affordable scooter that makes it stand out from the plethora of Chinese rebadged options that have flooded the market. The side stand as well as the pillion footpegs are flush fit, giving it a clean look. The mirrors have this uber cool rectangular shape and provide great visibility of oncoming traffic. Even the brushed metal-finished stalks are long and slim, lending the scooter an air of premiumness.

Where the B8 cheaps out is the quality of plastics used for the panels. It is thin and flimsy, which also led to quite a lot of rattling noises during our test runs. Then, there are the switches. These small tabs aren’t too convenient to operate, some of them being quite awkwardly positioned.

The lightness of the BGauss B8 blows you away. The company hasn’t shared an exact figure but it is likely to be quite close to or even lower than the 100kg mark. It is fairly easy to prop it onto the centre stand and you don’t even have to be strong to do so. Seat height is very accessible, which thanks to the slim seat, makes it very easy for riders of all heights to manage the scooter when at a standstill.

With the B8’s battery located under the underseat storage area, riders aren’t left sitting in a knees-up position. Floorboard space is a bit tight but we’d be fine giving that a pass considering this is a compact scooter. Thankfully, there’s enough space for your feet as well as a few groceries to be placed on the floor.

The tradeoff with the battery being under the seat and not in the floor is less boot space. The B8 only gets 18-litres of storage capacity, which is quite less compared to scooters in general. Also, removing the 10kg battery (gulp!) will take some getting used to. The two pull tabs to remove the lid over the battery box aren’t slick and easy to operate, making the battery extraction process tedious.

BGauss makes use of a Bosch BLDC hub motor that has a continuous power supply rating of 0.8kW. It isn’t too high, even when you consider the scooter’s urban riding intentions. Do not let the torque figure dazzle you. Since the B8 uses a hub motor that crazy figure is at the rear wheel with gear reductions taken into consideration. So comparing that number directly with a conventional ICE scooter would be tricky at best. Thankfully, our acceleration tests speak for themselves.

With a peak power rating of just 1.9kW, the BGauss was never going to be a quick scooter. It is not in the same league as the Ather 450X and even the Gemopai Astrid Lite that we tested earlier was significantly quicker. It is light though, allowing the rider to swiftly make his/her way through tight spaces. In mode 1, there’s barely any grunt, almost making it feel like a limp-home mode. Mode 2 is where the motor begins to get going at reasonable speeds and there is just a little more oomph to be had in the third mode.

The throttle calibration still needs fine tuning. Much like we have experienced on some of its competitors, the B8’s throttle too seems to be dead for a second or two before lurching forward, making acceleration rather difficult to anticipate. Then there’s the fail safe power cut-off when you as much as touch the brakes. There is no linearity in its intervention, feeling very binary in that sense. The combination of these two irritating features becomes borderline hazardous when you have to take a quick U-turn at an intersection with peak rush hour traffic coming at you from all sides.

Despite claiming the scooter could only do around 70km in the lowest power mode, the BGauss B8 managed seven kilometres extra in the intermediate riding mode. Our test riders maintained an average speed of 20-25kmph within city limits and never exceeded 40kmph on the speedo. Now, extracting this much range is a painstaking process, one that requires you to be extremely gentle with throttle and braking inputs. For most commuting situations, we guess the company’s claimed 60km in mode 2 would be the more realistic range one could actually extract from the B8.

Given the B8 is only going to be useful for city jaunts, we feel the suspension could have been tuned slightly softer. In its current state, both suspension units fail to completely isolate the rider from small bumps or surface imperfections. And the ride on rumble strips feels a bit jarring. It does get better once the pace goes up, but given the motor’s shortcomings, you won’t find yourself at those speeds often, and would end up wishing for a plush riding experience.

It does make light work of city traffic. Its compact dimensions, eager steering and light weight enable the rider to effortlessly carve through the tightest of spots. The sharpness of the steering can feel a bit overwhelming initially, thanks to the reverse-offset front axle and small 10-inch wheels. However, it is something you will get the hang of within an hour or two of riding the scooter.

Braking progression on the B8 could have been a little bit smoother. Currently, the bite is extremely fierce with the low rolling resistance Ceat Zoom Plus tyres not offering adequate traction in panic braking situations. The rear end tends to step out if the lever is yanked hard, which is fun for hooning but not commuting.

The B8 comes in three variants: lead acid, lithium ion and lithium technology. The first two variants are pretty self-explanatory. Of course, it goes without saying, the lead acid version doesn’t get removable batteries. The top-end lithium technology variant gets the smattering of connectivity features that most premium electric scooters come equipped with these days.

At Rs 82,999 (ex-showroom India), the BGauss B8 is one of the nicer affordable electric scooters available in the market. It scores high in the city sensibility department as it is light on its feet, reasonably peppy, and handles rush hour traffic well. We would definitely like BGauss to tune the throttle input for a linear getaway as well as smoother intervention of the motor cut-off when applying the brakes. The range is adequate for a single day’s worth of commuting and the charger isn’t too heavy to carry around as well. A 5A plug point, which can be easily found everywhere, is all you need to charge the 10kg removable battery. Overall, the BGauss makes a good impression for those who want to go electric without wanting to splurge on something extremely premium such as the Ather 450X or the Bajaj Chetak.