Can the Trials 500 satisfy your trail-riding needs or should you go for the Himalayan? 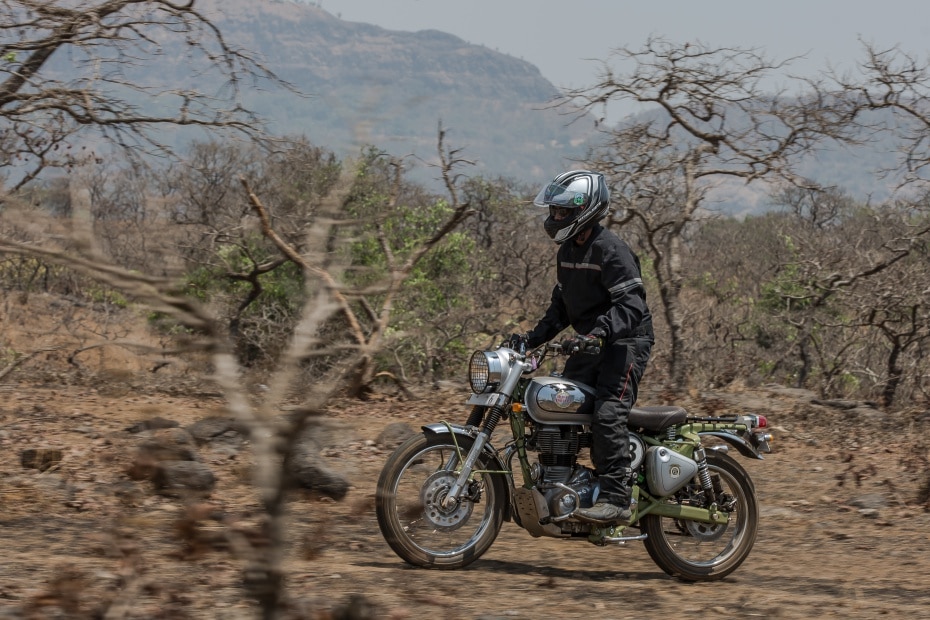 Royal Enfield’s motorcycles are quite popular amongst the customisation community here in India, and serve as the perfect canvas for a variety of custom jobs. Some do it just to look cool, and a lot of others do it to enhance the motorcycle’s capability off the road. After all, it’s no coincidence that Royal Enfield riders are the ones most commonly found doing the Leh-Ladakh circuit. With the launch of the Trials range, it is evident that Royal Enfield took notice of such a flourishing custom scene in the country, and they made a motorcycle that looks like it can travel to the famed mecca of bikers even more easily than the stock Classic! But then, is it more of a cosmetic job like the Thunderbird X, or does it actually have some enhanced abilities?

Royal Enfield has a rich history in the world of Trials competition. The Trials 500’s design scheme is in fact a throwback to Johnny Brittain’s Bullet 350, with which he won numerous Trials titles in the 1950s.  As you can see, they’ve even carried the same design theme from the vintage bike. There’s chrome on the forks, headlight nacelle, a 3D badge that’s similar to the one on the Interceptor 650, a very retro-looking dull green with not-so-discreet silver and chrome on the bodywork. You can’t deny there’s an air of coolness in Royal Enfield’s motorcycles, at least when it comes to the paint job, and the Trials is no different. That said, looks are always subjective, and some who aren’t aware of the feats of this bike’s forefather might find it funny or odd.

The seat is the same sprung unit as the Classic, but the pillion seat has been replaced with a luggage rack. The side panels get the new “RE Bullet Trials Works Replica” stickers, and the fenders, tail lamp and indicators are straight from Continental GT 535. Hmm, cost effective. Furthermore, the raised rear fender gives the bike a proper off-road-ready look, and exudes an air of function over form.

Swing your leg over the bike and you’ll be happy to notice the delightfully vintage-looking single sprung seat offers all the space your bum needs to move about. Plus, since it’s sprung, it works quite well in suppressing rogue judders. The handlebars are nice and wide and the foot peg position is neutral (same position as the Classic’s).

While sitting on the motorcycle is pretty comfy, it gets a little awkward once you stand on the footpegs. Your feet ends up having this weird inner curve because of the wide fuel tank, the handlebar feels a tad too low and close, and the footpegs’ position doesn’t help its case either. Apart from the absence of the pillion seat, the rear footpegs are missing too. That gaudy-looking upswept standard silencer’s position is to be blamed the bike not being couple-friendly. When asked why, expect the marketing guys from RE to say “It’s a trials bike, mate, it doesn’t need a passenger seat!” But there’s no denying that most of us Indians prefer a do-it-all motorcycle over a focussed one, right?

The instrument cluster is akin to the Classic 500’s. You get the same nostalgic analogue speedo with black and white lettering/background and a little pod that houses a low fuel lamp and ABS light. While it looks minimalistic, it simply lacks the crucial bits that you’d use on a frequent basis like a fuel gauge and tripmeter. However, a lot of riders seem to be okay with minimalism, so that again is subjective. I, for one, am a sucker for info-laden clusters! When it comes to electricals, the motorcycle comes with basic bulb-type lighting system with no LEDs anywhere.

For safety, the Royal Enfield Trials 500 features dual-channel ABS. Unfortunately, it is not switchable and this will annoy you if you’re heading to the trails with the expectation that you can lock the brakes on command to execute tricky maneuvers. A rear-only-off mode might’ve really dialled up the fun quotient.

The Bullet Trials 500 uses the same engine as the Classic’s. So performance-wise, it is pretty much how the 499cc single-cylinder fuel-injected motor is in the Classic. You experience this satisfying surge of torque (peak figure: 41.3Nm) at lower rpms. But on the flip side, this pull fizzles out rather quickly because of the lack of outright power. It does make 27.5PS, but it arrives at a rather too vibey 5,250rpm. Plus the sheer kerb weight of 192kg leeches a lot of energy out of that motor. That said, the torque really did help in its trail-riding prowess but I feel it deserves shortened gearing for even more improved low-end grunt, so that it’s really worthy of being called a trials bike.

Out on the highways, the massive piston in the half-litre motor really makes its presence felt after 85-90kmph. These vibrations don’t really encourage you to push the bike harder post those speeds, but stay below them and you’ll be rewarded with a calming riding experience, with the exhaust thumping away to glory.

The telescopic forks up front and the twin gas-charged shock absorbers are the same as the ones in the Classic, but in the Trials, the forks gets a brace borrowed from the Continental GT 535. The suspension can soak up bumps effortlessly, and the sprung seat further helps in keeping the rider comfortable on bad roads. However, on very sharp bumps, the ride quality tends to get a little bouncy. Being a trials bike, we expected the springs to have more travel but Royal Enfield hasn’t offered it in this bike. Also, the rear brake pedal could’ve been designed better as it is the first thing that gets damaged when you go over harsher trails.

Brakes include 280mm front and 240mm rear discs, with dual-channel ABS as standard. On the road, they offer good bite and progression but off the road, they feel spongy because the ABS is working overtime to prevent wheel lockup. Coming to a halt from higher speeds on the tarmac could’ve been more confidence-inspiring with a bigger front disc. The 90-section front and the 110-section rear Ceat Progripp tyres work really well on trails. I couldn’t really judge their grip out on the roads, as we didn’t get enough time to test them properly.

The Bullet Trials range is available both in 350cc and 500cc guise. The Bullet Trials 350 employs a 346cc single-cylinder carbureted engine which develops 20PS at 5250rpm and 28Nm at 4000rpm. It works alongside a 5-speed transmission. Its underpinnings are the same as the Bullet Trials 500 but the motorcycle gets a different colour scheme (red frame and silver body panels) to differentiate it from its bigger brother. This variant also gets dual-channel ABS as standard, and is priced at Rs 1.62 lakh (ex-showroom, India), which is about Rs 9000 more expensive than the regular Classic 350.

The Royal Enfield Bullet Trials 500 is certainly a looker, but all the cool bits - the compact chrome engine guard, aluminium bash plate, headlight guard, cushioning on the handlebar brace, race number plate on the side with Johnny Brittain’s iconic ‘48’ numbering - are optional extras. It’s a crying shame that Royal Enfield doesn’t offer them as standard as without these add-ons, the motorcycle just feels a little half-hearted.

On the Trials, what RE basically offers you is the upswept emission-compliant exhaust, while the rest of the bike’s features - knobbies, raised fenders, braced handlebars - can all be replicated via aftermarket parts on the Classic itself. Plus, you have the advantage of having a pillion seat which can be taken off and can be replaced with a luggage rack whenever you want. The Trials doesn’t have this versatility.

That said, if you’re in the market for a cool factory custom that pays homage to the Bullet’s legendary off-road lineage, the Trials 500 is the one to go for. But at Rs 2.07 lakh ex-showroom India, buying this bike is more of a heart-over-mind decision as it is more expensive than the Himalayan by a whole Rs 26,815. So if you want something that’s capable off the road, you’d be better off with the Himalayan, which gets befitting off-road-centric dynamics, more touring-friendly features and ergonomics and lastly, a more refined motor.