Is the naked MT-15 a better alternative to the faired R15 V3.0 in the real world? 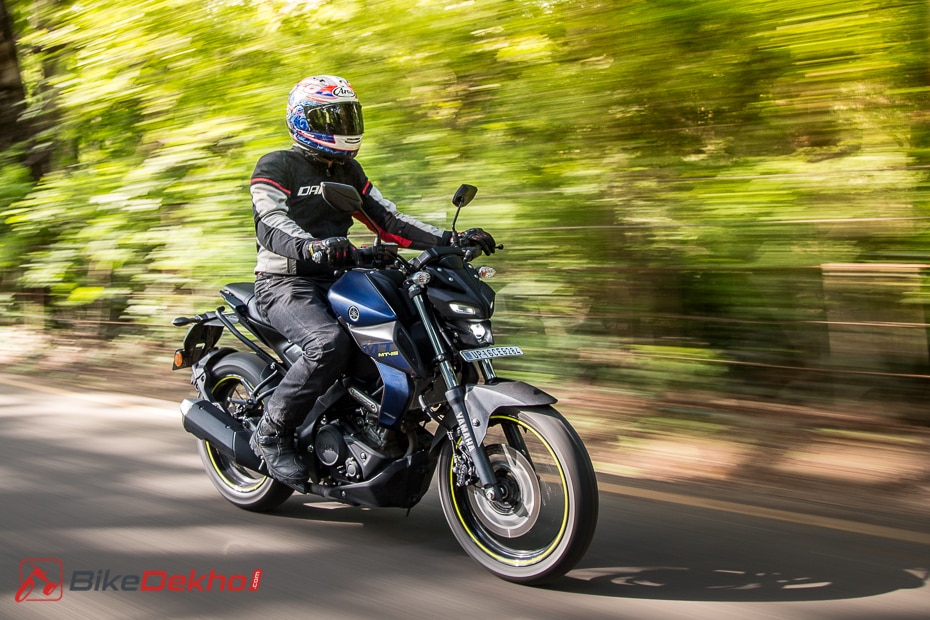 We have been riding the Yamaha R15 V3.0 for over a week now. We rode it in the city, highway as well on our favourite curves at Lavasa. The R15 V3.0 impressed with its tractable motor and dynamic package. However, its committed riding position had our wrists and backs sore. The Yamaha MT-15 should then be the ideal alternative to the R15 V3.0 in the real world, offering all the virtues of the faired bike in an easier-to-ride package. Priced at Rs 1.36 lakh, the MT-15 is just Rs 4,280 shy of the R15 V3.0’s asking price. So if you are looking for real-world thrills, is the MT15 the one to go for over the R15?

The precise gearbox is a joy to use

Better low-to-mid-range performance thanks to the larger rear sprocket.

Design:
The Yamaha MT-15 is one unique looking motorcycle. That is unless you consider the larger Yamaha MT-09. Clearly, Yamaha’s naked MT-lineup genes have trickled down to the baby MT-15. While the bike’s design might look busy in isolation, as a whole it is an attractive looking package. It gets a mass-forward design and an alien-looking headlamp with twin DRL’s as well as a spherical LED projector main lamp below it. The lamp is an exposed unit that could easily get damaged by flying road debris. Behind the muscular-looking 10-litre fuel tank is a scalloped single-piece seat. The stubby tailpiece holds a large number plate holder that sticks out like a sore thumb. The other things that stand out are the bulbous turn indicators. A slim LED unit like the KTM’s would have completed the look. In terms of plastics and switchgear quality, the MT-15 feels a notch below the R15 V3.0. All things considered, the MT-15 gets our vote in the looks department.

Ergonomics:
You sit ahead on the MT-15 (compared to the R15 v3.0) and the almost flat one-piece handlebar and rear-set footpegs have you sitting in an upright, almost supermoto-like riding position. The problem with sitting close to the handlebar is that the instrument console sits below your field of vision. With a full-size helmet on, you need to look down to check the console, a risky proposition when on the move.

The one-piece seat is narrow and its cushioning feels hard. At 810mm, it is 5mm lower than the one on the R15. However, the upright riding position means you have to stretch your toes a bit more here. But given that the seat tapers down towards the fuel tank, average sized riders should not have much of a problem. However, this contour along with the firm cushioning does make the seat uncomfortable for long rides. The pillion seat, despite the MT-15’s compact nature, feels surprisingly accommodating, though the grab rails on either side are placed too low to be of much use. Another notable grouse is the switchgear. Surprisingly, the MT-15 does not share the R15 V3.0’s switchgear and instead uses tiny units on both sides. What annoys us is the placement of the switches. The fact that you have to partly get your hands off the handlebar grip to operate the buttons makes it an ergonomic disaster.

Technology and features:
The MT-15 gets an all-LED headlamp and tail lamp, but uses bulb-type turn indicators. Its headlamp setup consists of two overhead LED DRL’s and a bi-LED main beam enclosed inside a projector setup. It emits a fairly bright and wide beam spread and is way better than the R15 V3.0’s poor headlamp intensity. The digital instrument console is similar to the R15 V3.0 but gets a negative LED display. This display works well during the day time but needs to be brighter for night use. It shows the speed, engine revs, fuel level, odometer, trip meter, instantaneous and average fuel efficiency as well as average speed. Like the R15 V3.0, the MT-15 gets a high-tech motor with Variable Valve Actuation for better grunt throughout the rev range. For safety, the MT-15 gets a single-channel ABS setup. This is disappointing since the R15 V3.0 gets dual-channel ABS as standard.

The MT-15 shares the R15 V3.0’s 155cc motor. Although it gets the same tune as the faired bike, the MT-15 gets a larger 52-tooth rear sprocket in place of the 48-tooth one on the R15 V3.0. This leads to the MT-15 having shorter overall gearing than the R15. So effectively, the MT-15 offers better in-gear acceleration. In city speeds, you are quicker in gears as high as 3rd and 4th and this trait helps a lot for quick overtaking manoeuvres. Thanks to Variable Valve Actuation, you can ride the MT-15 in 5th gear most of the time, even in the city. It even pulls cleanly in 5th every time you slow down for a speed breaker or traffic. This trait gives the MT-15 fantastic fuel efficiency in the city. The slick 6-speed gearbox is precise and given its light clutch action, a joy to use.

Out on the highway, the MT-15 has enough grunt to cruise in the 80-90kmph range in 6th gear and even cleanly overtake vehicles at those speeds without downshifting. Overall, the MT-15 has a gem of a motor that is quick in the city and cruises effortlessly at highway speeds.

Like its faired cousin, the MT-15 too gets a deltabox frame, a 41mm front fork and a monoshock. However, the MT-15 gets a shorter trail that makes it steer quicker and respond well to steering inputs in the city. But push it hard and the front feels vague, giving you very little feedback about what is happening underneath. This vagueness does not inspire confidence to push the MT-15 hard into corners. Also, during our acceleration runs, the light front end had a slight shake during each upshift.

The suspension setup is on the firmer side, especially at the rear. At slow speeds on the MT-15, you can feel road imperfections and even rumble strips can feel jarring. Large bumps and potholes have the rear monoshock bouncing back quicker, sending a jolt to the rider’s backside. This is further intensified by you sitting upright and over the monoshock.

Overall, the MT-15 feels too sharp to inspire confidence while the stiff ride can feel bothersome on longer commutes.

Under hard braking, the MT-15 tracks straight while the levers offer a more progressive bite.

Verdict:
A naked version of the dynamic Yamaha R15 sounds like a fantastic proposition. On those lines, the MT-15 looks quite appealing. It has a gem of a motor and its light front end and flickable chassis make it a fantastic bike for city use. While its drawbacks like the hard seat can be worked on, one major downside is the MT-15’s high asking price.

While the MT-15 costs Rs 4,280 less than the R15 V3.0, it compromises on a lot as well. For instance, it loses out on the R15 V3.0’s dual-channel ABS setup. Even the overall quality is not on par with the R15 V3.0, which itself does not impress on that front either. All things considered, the MT-15 feels overpriced. However, if you are willing to pay the extra premium, the Yamaha MT-15 is your best bet to experience the R15 V3.0’s dynamic package without the punishing riding position.