This is Suzuki's redemption, a chance to win back the 'King of the Superbikes' crown. We ride the newest entrant to the premiere superbike club at Kari Motor Speedway. Does the gentleman among superbikes pack a mean upper cut? 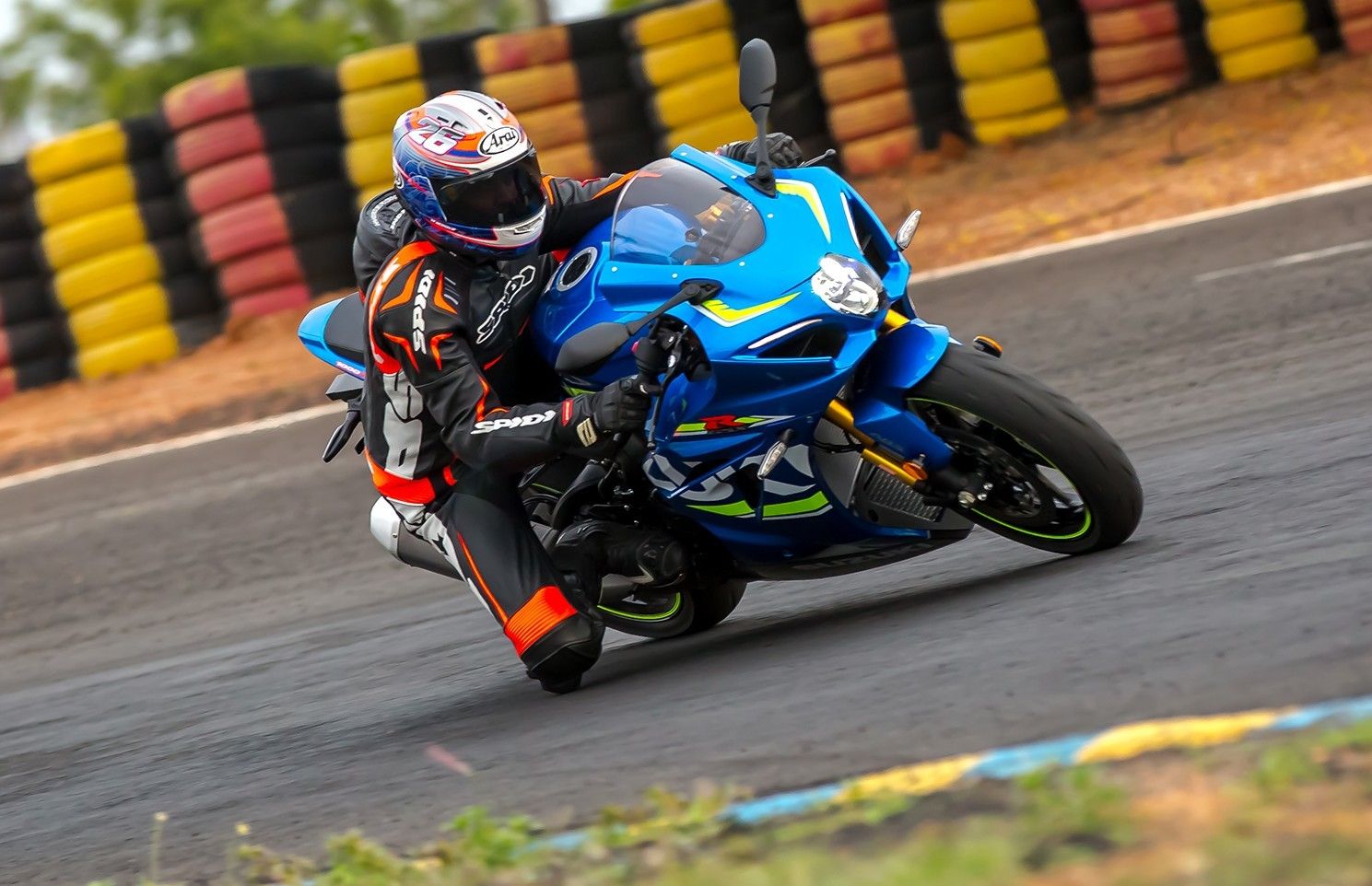 The litre-class superbike business has been the pinnacle of performance and technology for a while. It is also a very fiercely-fought segment, where superbikes are matched evenly when it comes to the magical power output of 200PS, and that’s beside the melee that modern-age electronic aids have become, to be able to send that much power to the rear wheel, cleanly.

In the Japanese litre-class superbike space, Suzuki has been trailing behind its competition for quite a while now. Its flag bearer, the GSX-R1000 was updated a decade back, in 2007, apart from a minor refresh in 2012.

The word dated thus felt like an understatement in a world where litre-class bikes are updated every single year. However, Suzuki was busy working behind guarded doors all these years, creating a new generation GSX-R1000 to take the fight to the current crop of hyperbikes and win back the coveted title of being 'The King of the Superbikes'. To do this, the focus was on three areas: the engine, chassis and electronics. How deep do the changes go? A few laps on our country’s most technical race circuit, the Kari Motor Speedway helped me understand.

Suzuki’s vision was to not only make the new bike’s engine more powerful, but also more compact. The configuration is the same, liquid-cooled, in-line four-cylinder, though the bore has been increased while the stroke is shorter now, making it even more oversquare than before to offer more power without having to increase the piston speed significantly. Ironically, Suzuki has succeeded in making the engine more compact despite the increased bore diameter. Displacement is marginally higher at 999.8cc (as compared to 999cc earlier), and the compression ratio is higher too, to improve top-end performance while not compromising the low and midrange grunt the previous bike was appreciated for.

To ensure that, Suzuki has developed a variable valve timing system (Suzuki Racing VVT) that advances and retards valve timing at pre-set revs to offer optimum power and torque across the rev range. Peak power output is up to 202PS (produced at 13,000rpm), which is a hike of 17PS over the previous generation. Torque is up marginally by 1Nm, and stands at 117.6Nm now, which is produced at 10,800rpm, as opposed to 10,000rpm on the older bike. The engine also revs higher by 1000rpm, with the redline set at 14,500rpm. Needless to say the new engine has benefited immensely from Suzuki's MotoGP program.

The use of a second injector above the intake trumpet is one such technology. It sprays finely atomised fuel into the combustion chamber at higher revs to enhance top-end performance.

The breathing apparatus also sees a switch from bucket tappets to finger followers in the valvetrain, and valves are made of titanium instead of steel in the previous engine. That is merely the tip of the iceberg though, as the new GSX-R gets dual stage intake systems to offer the optimum balance between low to midrange and top end performance. The 4-2-1 exhaust system gets servo-operated butterfly valves in the header tubes to adjust back pressure depending on the revs the motor is spinning at.

The new engine has facilitated a frame that is 20mm narrower than before at its widest point, and the frame is 10 percent lighter than before too. Cylinders are mounted more upright than before, which has helped Suzuki move the engine further ahead, which in turn has allowed the use of a swingarm that is 40mm longer to improve stability, without having to increase the wheelbase drastically. That said wheelbase is by up 15mm. Moving the engine further towards the front axle has also improved front end feedback, a vital input on a bike like the GSX-R. Overall weight is down by 2kg and now stands at 202kg (for the standard GSX-R1000, the GSX-R1000R weighs 1kg more at 203kg).

That was the engine though; now let’s talk about the electronics. The new GSX-R1000 gets a 3-axis Inertial Measurement Unit (IMU) to monitor the movement of the motorcycle in 6 directions by factoring in pitch, roll and yaw to provide optimum traction. The bike gets three riding modes just like before, though interestingly, all three modes offer the full 100 percent. What changes is the throttle sensitivity changes – A gets the most sensitive throttle while C gets the least, meaning responses are sharpest in A mode.

Then there’s a 10 stage traction control system. Stages one to four are the least intrusive and allow some rear wheel slip before intervening, while stages five to eight soften throttle response beyond a specific lean angle for better control and cornering grip. Stages nine and ten have the highest intrusion levels and are best suited to wet conditions. The higher specced GSX-R1000R gets additional features like a bi-directional quickshifter with auto blip, launch control and cornering ABS.

Launch control works by letting you hold revs at a pre-set 8000rpm and once the clutch is released it also controls the throttle opening depending on various factors like rear-wheel slip and front-wheel lift, thus allowing for cleaner take-offs. In addition, the R also gets Showa Balance Free Forks (BFF) and a Showa Balance Free Rear Cushion Lite (BFRC) damper. The standard GSX-R1000 gets fully-adjustable Showa Big Piston Forks (BPF) and an adjustable Showa monoshock damper.

At first glance, the GSX-R1000 looks surprisingly compact, almost like a 600cc supersports machine. Suzuki has managed to shrink the bodywork around the new, narrower frame. The tail section is shorter and sharper looking, and the design, on the whole, is more lithe and aggressive. The bike may not win any awards for its design, especially with that exhaust, which is probably the biggest canister on a production bike. What makes the bike stand out though is the Triton Blue paint job with MotoGP livery, and in my opinion is the one to go for.

The standard and the R version both get LED headlamps, turn indicators and tail lamps. Interestingly, only the R gets LED DRLs too to differentiate it, apart from the R badge. The new LCD screen is large and offers a host of information in large, legible fonts (the R gets a sexy looking black backlight). In addition to regular information, the display also shows average fuel consumption and ambient air temperature.

The riding position is sporty but not as aggressive as a Kawasaki Ninja ZX-10R or an Aprilia RSV4. Thanks to the shorter air intake stacks the fuel tank sits lower, allowing you to tuck in better behind the flyscreen. The 825mm-high seat is wider near the tank which makes it feel taller. Rider modes and traction control settings are accessible via mode buttons on the left handlebar. Start the bike and you are greeted with a gravelly exhaust burble. The exhaust note is not a bad one, though it is just not as sweet as we are used to on a Suzuki.

We got to spend a few laps with both the GSX-R1000 and the GSX-R1000R, and initial impressions are that the engine is even smoother, while the gearbox is slick with a positive feel on upshifts and downshifts both. The new cassette-type gearbox has revised ratios – taller first and final gears are meant to help on track. Of the two, it was the R that felt more comfortable on the track with its superior suspension. The steering felt a tad heavy on both bikes, though the R had a natural tendency to lean into corners and was easier to tip in. The feedback on the R thus inspired more confidence, allowing me to open the throttle quicker and wider as compared to the standard S.

The R’s suspension was better at soaking mid-corner bumps, which in turn meant smoother and ultimately faster laps. Jump onto the standard bike and you realise why you need to spend extra money on that high-spec suspension. The main straight at Kari felt smooth on the R, but on the standard bike I could instantly feel the several bumps across the length of the main straight. The electronic steering damper was hard at work on the standard bike, and did take care of a couple of nasty tank slappers, but could have been quicker to react. The rims are a lightweight six-spoke affair which helps in easy turn-ins. The standard and R both come shod with Bridgestone Battlax Street RS10 radial tyres. While the front remains the same, the rear gets a larger rear profile, and our limited time on track meant we could barely assess the grip from the tyres.

Most of the corners at Kari are best taken in second gear on a litre-class monster like the GSX-R, and the bottom end grunt from the engine was commendable. During our short stint on the track, traction control was set to 4 while the riding mode was set to A. The electronics worked well in taming the 202PS monster through slow speed corners, especially the gravel-strewn set of corners that lead to the main straight. On straights, the GSX-R1000 was nothing short of a supersonic missile, and the ergonomics made is easy for me to tuck in and hit an indicated 210kmph.

Front brakes are 10mm larger units from Brembo, clamped to radially mounted monobloc callipers, while the rear gets a Nissin unit. Brake bite is not as strong as some of the other litre-class bikes I’ve ridden, and the GSX-R uses rubber hoses and not braided steel ones, which robbed me of some feel and consistency when riding hard on track. The hot brake fluid causes the rubber hoses to expand a bit, a condition that is tightly controlled with steel braided hoses.

Best of both worlds

The previous two generations GSX-Rs were known to be capable on road and track both. The new bike promises to be more involving for the experienced rider in keeping with that legacy. Not only is it a highly potent track tool, it should also feel equally good on the road with its more relaxed ergonomics and tractable motor, thus helping make it a user-friendly motorcycle, just like its predecessors.

The way the Showa suspension soaked in bumps on track, it should offer affable ride quality on the road too, and help the new GSX-R round itself off as a superbike that you can live with. In terms of pricing, at around Rs 19 lakh (ex-Delhi) the GSX-R sits comfortably in the middle of the litre-class price range. The GSX-R1000R, at around Rs 22 lakh (ex-Delhi) sits closer to the limited edition Kawasaki Ninja ZX10RR. Given our brief time in the new GSX-R’s saddle it is difficult to comment on how it will feel in comparison to an Aprilia RSV4 RF or the Kawasaki ZX10RR, though clearly, it’s the R version that shows more promise with its higher spec equipment and electronics. Along with all that, the GSX-R also comes with the bulletproof reliability that Suzuki is renowned for as a sportsbike maker. We are hoping to bring you a full-fledged road test of the bike too, so stay tuned for a more detailed review of this lethal machine.