Published On Sep 7, 2020 By Jehan Adil Darukhanawala for Aprilia Storm 125

Can the Storm 125 strike the right balance between fun and practicality while still retaining the core Aprilia principles? 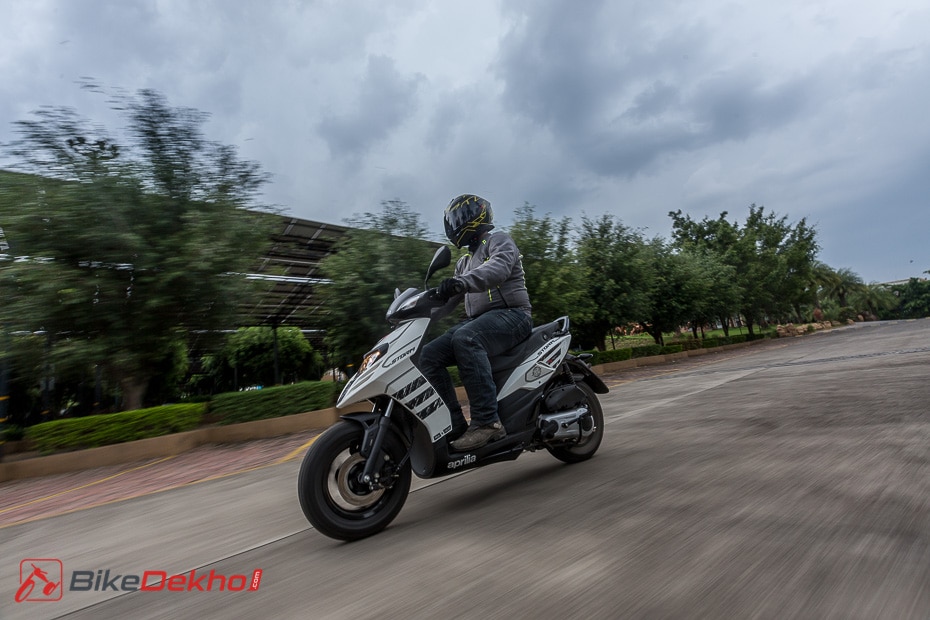 The Aprilia SR 150 changed the landscape for the scooter segment in India. It was fast, brash and very un-scooter-like. Its success paved the way for the Italians to launch a 125cc version. Sadly, that couldn’t quite replicate the SR 150’s success story. The 125cc scooter buyer, while looking for performance, was also looking out for comfort, features and practicality, which the SR 125 didn’t perform too well on. Heck, it wasn’t even the quickest 125 out there.

With the introduction of the Storm 125, though, Aprilia sought to win over more conventional scooter buyers, making them think that the new scooter was more comfortable, more practical and still had decent performance on tap. And even though it has been on sale for nearly a year, it is only now that we have got some proper time astride the entry-level Aprilia scooter. Does it strike a better bargain now?

You would be hard-pressed to find any differences in body panels between the Storm and the SR models, as there aren’t any. The sleek, sharp precision tool that is the SR looks enticing with this style and the graphics combination plays well with its racy intent. However, the graphics might not evoke much emotion and the four colours offered fail to make the scooter pop.

That said, there are still certain elements that make you feel that you have purchased a premium scooter. Take the pillion foot-pegs. They are made from premium plastics with a lovely gloss black finish to it. They are flush fitting and don’t look like an afterthought. The paint quality is exquisite and Aprilias have always scored well when it comes to fit and finish.

While you will have to continue reading to know how the dual-purpose Vee Rubber tyres perform, the chunkiness of the rubber just adds to the rugged look of the scooter. The tyres aren’t as sleek as the older 14-inch Vee Rubber units found on the older SR 150 or even the new 14-inch Ceat Zoom Plus. The fat sidewalls have their own charm, with hardly any 125cc scooter boasting of having a similar appeal.

Being based on the SR platform, the Storm remains a pint-sized scooter. Now with the smaller rims, Aprilia has managed to lower the seat height. It is quite evident when jumping between itself and the SR 160. Aprilia officials state that the 775mm seat height of the Storm 125 is just 5mm lower than the SR’s but it feels a lot more as you have better connection with the floor at standstill on the smaller Aprilia. This could also be down to the softer suspension tune which compresses slightly more here.

As a result of the smaller rims, even the floor of the scooter is closer to the ground. Despite the claimed ground clearance figure of 155mm, the Storm didn’t scrape its belly on any of the large speed breakers.

The seat cushioning is too firm. We wish Aprilia gives it a plush seat in the next update as the seat’s hardness, coupled with the stiff ride, does tend to be quite taxing at the end of an hour-long jaunt. It has a small taper to it at the front, making it easy for shorter riders to reach the floor easily. The texture is also quite grippy, keeping you from sliding off when braking hard.

Pillion comfort isn’t that great either. The foam density could be softer and the outwardly jutting single-piece grab handle isn’t as convenient to grab onto as the split units of the SR. The latter, though, does a better job of making your partner feel secured on the seat and not falling behind when accelerating suddenly.

The Storm 125 isn’t that feature rich. You don’t get a twin-pod headlight setup on the Storm 125, Aprilia instead opting for a more cost effective lighting option across all its models now. No LEDs here either.

The semi-digital console, the latest addition to the Storm, is only available in the premium variant. It has an analogue speedo with the digital bit displaying a clock, two tripmeters, an odometer and a fuel gauge. That’s enough info to satisfy the 125cc buyer but bits like DTE/range or even average fuel efficiency indicator would be nice additions.

Modern convenience features like remote boot unlocking, external fuel filler cap, underseat storage light or even USB charging is a miss, the last feature being the only thing offered as an accessory.

Now it doesn’t take much time to figure out that the 125cc single-cylinder mill hasn’t gotten a boost. Getting off the line, the Storm 125 isn’t all that quick but once on the move, the engine gathers momentum rather rapidly. The motor doesn’t feel as quick as other 125cc scooters but the engine isn’t boring. The BS6 updates have ironed out the roughness that one associates with a carbureted engine. Beyond that though, it is still the same hoarse engine that we experienced on the SR 125. The exhaust note is still raspy, giving an extra dimension of involvement in your pursuit of speed.

Aprilia claims that the scooter that we were riding might just be one of the early units off the production line and hence, had a few glitches. One of which stood out was the revs refusing to trail down, despite not giving it any throttle input. The engine would idle at really high revs and this resulted in the scooter having a car-like crawl functionality, requiring the rider to be constantly on the brakes to stop proceedings. The idling would subside after a while though. But we must point out that even the SR 160 Race that we were riding parallely also has this problem, so there's more to it than just early production niggles.

In comparison to the teeth-clatteringly jarring experience that was prevalent on the SR 150 and the still osteoporosis-inducing SR 160, the Storm 125 feels comforting. There is more absorption in the suspension units with the monoshock now offering preload adjustability that you can set for your liking. Still, calling the ride plush would be foolish. Taut is much better. The bumps still filter through the handlebars and floor but they no longer jolt you that badly.

Some credit must also be given to the block pattern Vee Rubber tyres here that come wrapped on smaller 12-inch wheels. These tyres have a thicker sidewall which helps in better insulation while going over bumps.

Consequently, the chunkier profile of the tyres makes the steering feel slightly lazier. There is a moment of hesitation as the front momentarily feels heavy and reluctant to steer. Once you do start to go around the corner, the grip levels are high, inspiring great cornering confidence.

The brakes too have great feel as they bring the scooter to a halt with minimum fuss. The progression in the front disc is quite nice. If you do go hard on the brakes, the rear end does feel a bit squirmy but not enough to scare you silly. CBS calibration could be improved, as the system tends to be a bit lenient with the front end, despite you grabbing a handful of the rear.

Aprilia offers the Storm 125 in two variants with the primary difference being the braking hardware offered. The base model, priced at Rs 85,431 (ex-showroom Pune), gets a front drum brake while the more premium version gets a 220mm disc at the front. The latter costs Rs 91,321. To justify the roughly Rs 6,000 price difference, Aprilia has also thrown in the same semi-digital console from the SR series on the variant.

The Storm 125 then does really seem like an Aprilia better suited for our harsh roads. The suspension soaks up bumps better than the SR and the block-pattern tyres rarely lose traction. We would have definitely loved to have more features on board but that would have only driven up the price further. The engine continues to be a small letdown. The lack of excitement from the motor doesn’t sit well with Aprilia’s racing ethos and maybe the technicians at Noale need to spend some more hours on it.

The biggest hurdle for the Storm 125, though, remains its price. At Rs 87,082 (ex-showroom Delhi) for the drum model and Rs 92,601 for the disc, the most affordable Aprilia scooter is still Rs 18,000 - Rs 20,000 more than its 125cc rivals. Hence, justifying spending the extra moolah is quite difficult. If you are in the market for something exciting in this segment, then the Yamaha RayZR 125 or the TVS NTorq 125 make better sense.