Are the updates on the new Gixxer enough to displace the Apache RTR 160 4V from the top? 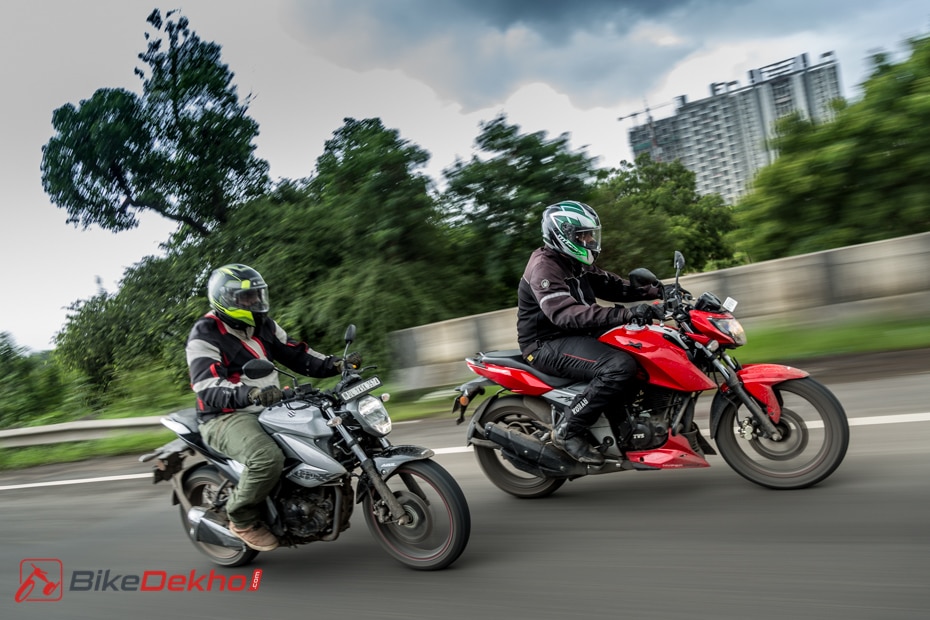 The 160cc segment is a really interesting one for Indian bikers. While the 150cc segment has been the traditional entry-level displacement for two-wheeler enthusiasts for the past two decades, things have moved on, especially in the past few years. What makes this segment so interesting and difficult for brands is the fact that a 160cc customer wants a perfect combo of performance, style, features and value. As you can see, two-wheeler brands have their work cut out.

However, TVS have managed to get the balance right with the Apache RTR 160 4V and it has been our pick as the segment’s best. But Suzuki is back to challenge for the crown as it has ridden in the update Gixxer. So can it take top honours back or is it a case of too little, too late?

Design:
Both the bikes are at towards the same buyers but have very distinct designs. The sharp and edgy lines of the RTR 160 4V have been carried forward from the Apache RTR 200. And we must admit that the fiery red shade that our test bike was draped in does look striking. Its chiselled tank, sculpted headlight, clever use of graphics and an underbelly cowl endows it with sporty styling.

The Gixxer on the other hand has maintained a few design elements of the older bike. But to make it distinct, Suzuki designers have given it a new LED headlight, redesigned LED tail light, split seats and a restyled exhaust muffler. While the overall lines of the new Gixxer flow well, I am not sure about the LED headlight as it looks like a misfit. Another oddball is the large exhaust muffler that sticks out like a sore thumb and we would have preferred a subtler finish on the exhaust tip. Having said that, the chunky fork, beefy tyres and the stylish alloy wheels do make the Gixxer stand out even in the rather dull silver colour on our test bike. Also, despite being smaller in terms of overall dimensions, the clever styling means that the Gixxer doesn’t look smaller when both the bikes are parked alongside.

Design is a personal choice and despite being poles apart in the style department, both the machines manage to make an impact in their own manner. Despite its age the RTR 160 4V does look sporty and while the Gixxer carries forward some cues of the older bike, the new bike does look fresh and appealing.

Ergonomics:
Swing a leg over and you will notice how different both these bikes are with respect to riding ergonomics. The Apache sports a wide handlebar and mildly rear-set footpegs, and the riding posture is slightly sporty with the rider leaning forward a bit. On the other hand the Gixxer has a more upright riding stance as the handlebar curves back towards the rider.

While one feels that the rider is sitting ‘on’ the Apache, on the Gixxer you feel as if you’re sitting ‘in’ the bike, making the rider feel more part of the machine. The sculpted tank of the Gixxer also enables the rider to have a more snug riding posture and lock his or her thighs around the bike. Also, the Suzuki feels more roomier for the rider and taller riders wouldn’t be cramped for space, which is the case with the TVS. If I had to spend long hours on the saddle, the Gixxer will definitely be my pick.

Seat height of the Japanese bike is also slightly lower at 795mm (Apache’s is 800mm)  and since it’s narrower as well, shorter riders will be more comfortable on the Gixxer. While the split seats look cool, they aren’t comfortable for the pillion as the rear seat is cramped and getting on it is also difficult as well. The single-piece unit on the TVS offers more space and is easier to get onto.

Technology and features:
The new Gixxer continues to feature an all-digital instrument console, but the layout has been revised and it does look better now. It also features a larger shift light indicator, positioned in the centre and details include a speedometer, tachometer, gear position indicator, fuel gauge, trip meter and clock. In comparison, the RTR 160 4V’s console has additional details such as a lap timer, top speed recorder and a reserve fuel light, but the carb variant that we tested misses out on a gear position indicator. Overall fit and finish on both the bikes is impressive, however the Apache’s switch gear and lever quality is more premium. Both the bikes are equipped with single-channel ABS unit as standard.

Engine and performance:
A glance through the spec sheet makes it clear that the Apache RTR 160 4V has a clear advantage over the Gixxer. In fact the new Gixxer is down on power compared to its predecessor and that’s disappointing. But, do numbers always tell the real story? In this case, yes: in our acceleration test the Apache was quicker by 0.5sec to hit 60kmph and a whopping 5sec in the 0-100kmph. What’s even more disappointing is the fact that the new Gixxer is marginally slower than its predecessor to 100kmph.

However, despite being slower the Gixxer does feel peppy to ride and remains an enjoyable bike to ride, especially in the cityscape. Power delivery is linear and the engine offers good low and mid-range performance. However, once you get into higher revs, the motor runs out of steam and feels strained. Even in terms of refinement, the Apache lead the charge as its engine is the most refined unit in the segment by a fair margin. While the Apache is a quick bike, what it lacks is a bit of character as sometimes you feel it's a bit “too” refined. It does offer a throaty  exhaust note that’s distinct and likeable though. On the open roads, both the bikes can sustain around 100kmph, but the Suzuki feels stressed and vibey at those speeds, while the Apache feels calmer and more poised.

A 5-speed gearbox is common on the duo and they perform their duty well. While I personally prefer the unit on the Gixxer due to its slickness, gear engagement is hard and if you aren’t wearing shoes, you might find the unit a bit notchy. Clutch action of both the bikes is light and is easy to modulate. Fuel efficiency is an important aspect for buyers in this segment and it’s the Apache that’s the clear winner. In the city, the bike returned us 50.4kmpl and the highway figure was 56.1kmpl. The Suzuki Gixxer on the other hand managed 49.70kmpl (city) and 50.58kmpl (highway).

Ride and handling:
Things get really interesting when it comes to handling. The Apache RTR 160 4V has been our pick when it comes to hard cornering given the feedback from the chassis and how forgiving it is. But, in terms of fast cornering, it’s the Gixxer that has the edge owing to its radial rear tyre which allows you to carry more lean without worrying too much. In fact, on wet roads during our tests, the MRF tyres gave much more confidence than the TVS rubber. Additionally, the Gixxer feels more eager and agile in city riding and you can ride through tight gaps easily.

In terms of ride quality, TVS has got the setup perfect and the RTR 160 4V offers the best ride quality in its segment and that too by quite a margin. Rough roads, potholes, undulations, no matter what the surface is, the Apache feels composed. The Gixxer on the other hand feels a bit firm, especially the rear, which can bottom-out on sharp bumps and your back does feel that harsh shock.

Braking hardware on both the bikes is similar, however the 2019 Gixxer comes with a single-channel ABS as standard, while the Apache RTR 160 4V that we tested didn’t have ABS. So we won’t get into the braking figures as it would be unfair. But with respect to feel, bite and progression the Gixxer is clearly the winner. The Apache’s brake lever feels spongy and robs the rider of feel, even though there's a good amount of bite from the pads.

Verdict:
It’s a rather straightforward verdict here: the TVS Apache RTR 160 4V is the better motorcycle and remains our pick of the segment. With the RTR 160 4V, TVS has managed a great balance of performance, refinement, features and fuel efficiency. It does a lot of things right and if you’re planning to buy our suggestion will be the double disc variant with single-channel ABS that retails for Rs 95,101 (ex-showroom, Delhi). But, we must point out that the carb variant will be discontinued when the BS6 norms kick in next year and the Fi variant retails for Rs 1 lakh (ex-showroom).

The updates on the Gixxer have made it a better bike despite the slight drop in performance. It still remains an exciting motorcycle to ride and one that connects with your heart despite its few shortcomings. But one can't dismiss the fact that it's more expensive than the Apache at Rs 1 lakh (ex-showroom) and Suzuki’s dealership network also can’t match that of TVS. So head-to-head, as a motorcycle the Apache RTR 160 4V is a better all round package and our pick among the two.