Who rules the roost in the BS6 era? Can the Japanese newcomer cause an upset? 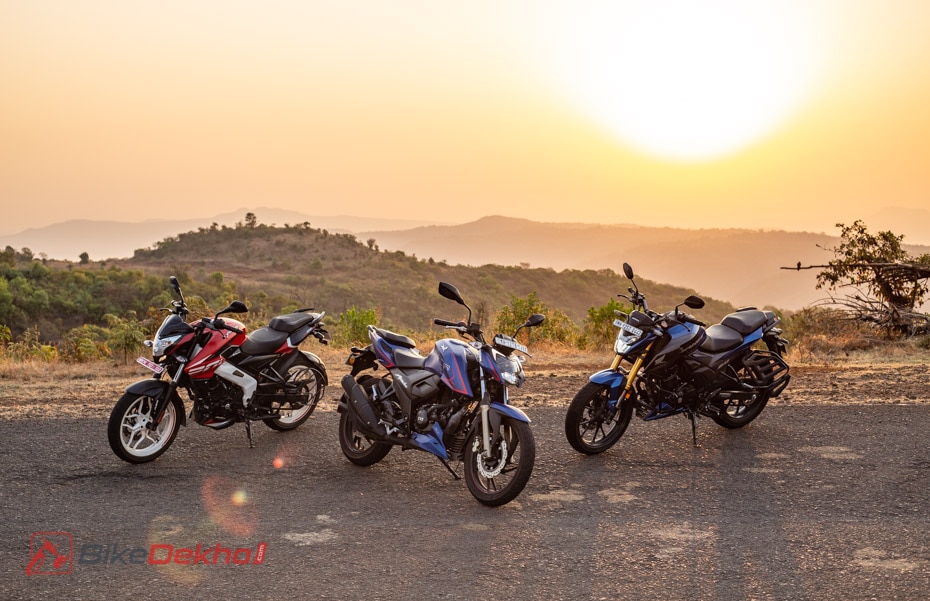 The 200cc segment is where your priorities begin to shift from ‘kitna deti hai?’ to ‘kitna bhaatgi hai?’, so it’s no surprise to see it populated by enthusiast-oriented names like Apache and Pulsar. Bajaj fields the Pulsar NS200, which, thanks to its KTM-derived powerplant, is the most powerful and torquiest bike in this price range. TVS’ candidate is the race-y and feature-rich Apache RTR 200 4V -- widely regarded as the segment leader in the BS4 era. Recently, though, Honda also threw its hat in the ring with the Hornet 2.0. Displacing 184cc, it isn’t quite a 200cc motorcycle, but its Rs 1.27 lakh price tag is right up there with the Pulsar and the RTR (both Rs 1.33 lakh). To see how things stack up in the BS6 era, and find out whether the Japanese entrant can overthrow the local favourites, we’re putting these fifth-of-a-litre nakeds up against each other in a three-way comparo.

First up, here’s how things stack up on paper. The NS is the oldest of this lot, having broken cover way back in 2012. Since then, it has remained pretty much unchanged, only receiving single-channel ABS and fuel-injection (to meet legislation requirements), and about nine thousand new colour schemes (for reasons only the Bajaj Auto boardroom can explain). Nevertheless, its 199.5cc motor is pretty much the 200 Duke’s mill with a missing camshaft and an additional spark plug. As a result, it’s the only liquid-cooled engine here, and churns out the healthiest figures -- 24.5PS and 18.5Nm.

Having observed the Pulsar for a few years, TVS fired its bullet at Bajaj with the launch of the Apache RTR 200 4V in 2016. With a slightly less cutting-edge oil-cooled motor, it can’t match the sheer output of the NS200, but thanks to features like a preload-adjustable fork, ride modes and Bluetooth connectivity, it makes the Pulsar feel downright spartan. Nearly four decades of racing experience should also make the RTR a pretty sweet corner-carver. The Hornet 2.0 brings some premiumness to the party, with high-end bits like a golden-finished upside-down fork, but predictably, it can’t match the other two for power and torque. But Hondas are seldom as they seem, so maybe a ride will reveal some tricks up its sleeve.

The trick up the Hornet’s sleeve is some pretty short gearing. Thanks to this, it manages to hang with the other two rather well, at least within the city. A 0-60kph deficit of 0.4 sec to the NS is virtually undetectable from the saddle, and healthy bottom-end grunt makes the Honda feel quite sprightly in the urban jungle. The open road is a different story -- a near 2-second deficit to 100kph means that the Hornet begins to lag behind, but you’ll have bigger issues at this point. While the 184cc motor does remain reasonably smooth at low revs, anything beyond 6500rpm sees a lot of buzz at all the touch points. The same short gearing that makes the Hornet feel sprightly in the city, becomes a handicap on the highway, because by the time you’re up to cruising speed, the engine is in the vibe-y half of its rev range, even in top gear (5th). Even if you are willing to live with the buzz, the motor just doesn’t have the grunt to comfortably pull you around beyond 100kph, which is a major bummer at this price point.

One area where the Hornet stands head and shoulders above the competition is fuel efficiency, but then that’s hardly a surprise, since it’s down on displacement and power.

Neither grunt nor vibrations are an issue on the Apache. In fact, it’s got the smoothest engine here, with the most usable power delivery. A nice and even torque curve means that thrust is delivered in meaty chunks, minimising the need to shuffle through the gearbox. That’s a pity, because the RTR’s 5 speed box is the slickest unit in this company, jumping from cog to cog smoothly and remaining protest-free even under vigorous clutchless shifts. Its only shortcoming is the lack of a 6th gear, which would have made highway stints seem a great deal more stress-free. The RTR’s ride modes are a bit of a brochure-filler, unfortunately, because Rain and Urban modes make the bike feel rather dull, and you’re best off just sticking it in Sport and leaving it there. When you do, it gets within half a second of the Pulsar in the dash to 100kph, so this Apache is definitely no slouch.

On paper, the Pulsar seems to have the best motor here, but if your riding cycle involves mainly city commuting, you might actually find it to be the worst. That’s because this is a rev-happy motor that really comes alive beyond 6000rpm and feels rather dull below it. As a result, it doesn’t enjoy puttering about at low engine speeds. Large throttle openings don’t produce the desired result at low revs, and you have to work the gearbox and keep the motor on the boil to make swift progress on the NS. But since it is the only bike here with a 6-speeder, it’s also the best highway bike of the lot. On the open road, the engine is in its happy zone, singing but not screaming. Should you want to, it’ll gobble up the latter half of its tachometer like nobody’s business and hammer into its 9500rpm limiter with delightful ferocity.

Another reason why the NS is a great long distance bike is its generous proportions. With the longest wheelbase and the roomiest riding position, it’s a very accommodating bike that feels substantial from the saddle, though shorter riders might find the seat a little tall. The RTR seems like a frankenstein bike, because the handlebars offer a comfortable, slightly-leaned forward riding posture, but the footpegs seem excessively rearset and high, meaning that taller riders will face cramped legs. The Hornet has the least aggressive, most upright riding position here, but its handlebar is unusually narrow, which can feel a bit unnatural at times.

Those 38 years of racing experience definitely shine through to make the RTR the sharpest bike in the twisties. Turn-in is quick and precise, the bike holds an accurate line and is very communicative and confidence-inspiring throughout. It backs this up by also offering the most plush and pliant ride over broken roads, and TVS has also worked hard on improving the brakes on the Apache. While feel still isn’t fantastic, it’s definitely an improvement over previous-gen RTRs, and when you trust the dual-channel ABS, it is the quickest stopping bike of these three.

In the right hands, the Pulsar can be equally quick, if not quicker, up a winding mountain road, but it requires a hell of a lot more work than the Apache. It’s a pretty unforgiving bike, so you need to get your entry speed and turn-in points just right, and make sure you’re in the right gear. And even after doing everything right, if you encounter a mid-corner bump, you need to be prepared to wrestle the bike back into control because it can get pretty unsettled. The NS’ firm suspension setup also makes it rather uncomfortable over poor stretches in the city, especially with a lightweight rider on board.

The Hornet handles like most Hondas. It’s pretty neutral, predictable and light-steering, but there isn’t a whole lot of feedback so you don’t have the confidence to push very hard. The narrow handlebar also becomes a hindrance during switchbacks or when you want to make mid-corner line adjustments. That golden upside-down fork looks great, but doesn’t add much value, because ride quality on the Hornet is a rather confusing affair. At times, it feels stiff, transferring sharp bumps through to your backside. Other times, it feels too soft and bottoms out over big bumps.

Despite being the most recently introduced bike here, the Honda doesn’t quite pack in too many cutting-edge features. Sure you get LED lighting and digital instrumentation, but the display doesn’t actually pack in much information. There’s no fuel consumption related data, and no Bluetooth connectivity either. But it’s still better off than the NS, which is still stuck with the same semi-analogue cluster that it was originally launched with. It doesn’t even get a gear-position indicator!

The clear winner in the features battle is the RTR 200 4V. Sure, some features like ride modes may be gimmicky, but others like adjustable suspension definitely add value, allowing you to tailor the bike’s setup to your weight. Adjustable levers also help you get more comfortable with the bike, and the slipper clutch is a great safety net when pushing hard, just like the dual-channel ABS. Its LCD display is also the most informative here with fuel consumption data and even lap timing functionality. It can even hook up to your phone via Bluetooth, allowing you to manage calls and music, and even displaying navigation information.

In the city, it’s hard to fault the Hornet. It’s frugal, manageable, comfortable and quick enough. But for the price that it demands, it needs to do more than just be a good city bike. When the road opens up, it’s left for dead by the Pulsar and the Apache, making it hard to recommend to 200cc buyers who are looking for an exciting riding experience.

Despite its age, the NS remains a pretty formidable motorcycle. In terms of sheer fun factor, it’s hard to beat. That same old age gives it a rather raw and analogue feel, and you have to be a skilled hand to extract the most out of this Pulsar. When you do, it’s an extremely rewarding motorcycle. But in this company, it does feel its age. We’d like it to be a little more well-rounded and well-equipped. Two things which the RTR certainly is, while still also being fun to ride, and welcoming to novice riders. Meaning that it retains its crown as king of the 200cc segment.