Is Triumph’s most hardcore scrambler the perfect embodiment of what the genre stands for? 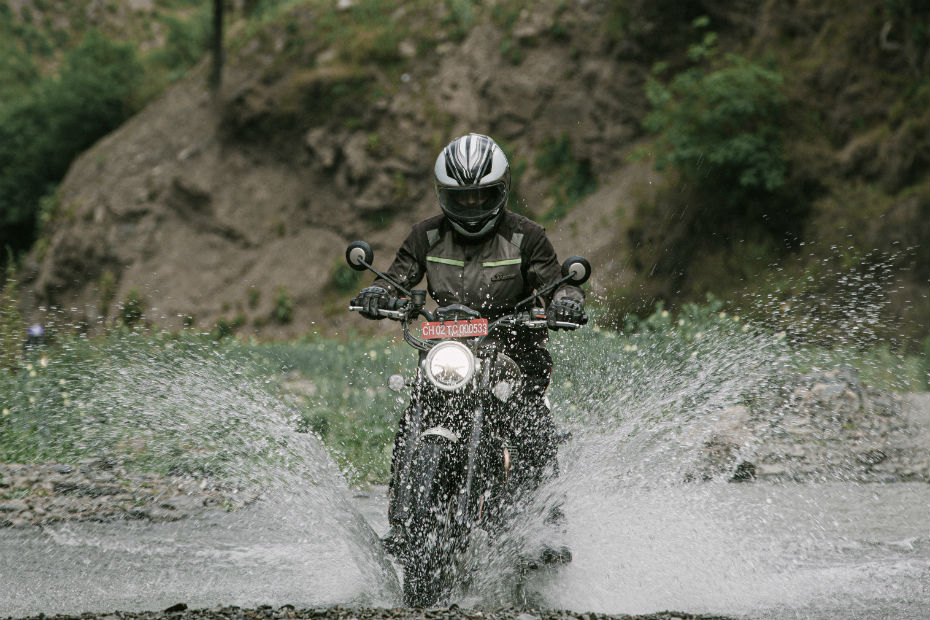 The whole purpose of a scrambler is rather straightforward: a minimalistic motorcycle that is designed to go over rough terrain quickly and effortlessly. Quite popular in the mid 20th century, scramblers were essentially production bikes that were stripped down and tweaked to go over territories that are beyond the end of the road.

Triumph’s tryst with this genre started off with the Bonneville T120 TT in the ‘60s. It was the brand’s first production scrambler based on the Bonneville T120. Triumph’s modern classic range is delightfully versatile and as cliche as it sounds, they do serve as a great blank canvas for motorcycle artists to run wild with their imagination.

Now, the British brand has launched its most hardcore scrambler, the Scrambler 1200 XC, in the country at a price tag of Rs 10.73 lakh (ex-showroom India). Is it a worthy true-blue scrambler that you can buy in India?

Simply put, the Triumph Scrambler 1200 XC follows a properly no-nonsense scrambler design language to the T. But Triumph being Triumph have really gone out of their way and paid a lot of attention to beautiful little details. The first thing you notice as you swing your leg over the motorcycle is the simple yet elegant brushed metal strip running across the fuel tank. I got the black colour variant but it’s the British racing green colour (Triumph calls it Khaki Green & Brooklands Green) which takes the cake as far as authenticity is concerned. Both colour variants get alternating layouts of matte and gloss finish on the fuel tank separated by a pinstripe.

If that wasn’t retro enough, look around the motorcycle and you’ll find plenty of bits that will take you back in time. For starters, you get a circular headlamp with bullet-style indicators and classic-style tail light - all housing properly modern LED units. There’s also a vintage-styled off-set Monza-style fuel tank cap, chopped aluminium fenders and neat scrambler-style high-set twin exhausts.

The instrument cluster may look simple at first but take a closer look and you’ll realise it is shaped like a watch, and even the digitally-rendered ‘needle’ looks a lot like the way it is on wristwatches. Plus, you get all the information that you’ll ever need on your ride. But more on that later.

Overall, Triumph has done a stellar job of concealing contemporary features behind the facade of a tastefully-done retro theme.

The wide handlebars and flat seat offer a properly upright riding position. This coupled with the centre-set footpegs make stand-up riding feel as natural as possible. Even during long hours on the saddle, the seat’s cushioning felt adequate enough. However, the seat is quite tall at 840mm, and I being 5’5” was literally tip-toeing the bike every time I came to a standstill. Dial in the 205kg dry weight into the equation and you’ll have an even harder time moving the bike with your feet on uneven terrain. The brake and clutch levers are adjustable and the handlebar risers are reversible, which in turn offer a 15mm forward and upward adjustment.

While the scrambler-style exhausts look pretty cool, they tend to heat up really quickly. Even though the part where the thigh touches the exhaust is protected by the ventilated heat shield, the heat is still intense enough to make the rider feel really uncomfortable. And it’s next to impossible to put your right foot down in traffic because of the exhaust. That said, once you’re in motion, the exhaust heat isn’t all that bothersome.

The Triumph Scrambler 1200 XC is loaded to the brim with features. It is the only bike in its class to have an optional GoPro integration module which enables camera control using the 5-way joystick on the left handlebar. This works in conjunction with the Bluetooth connectivity module, which also enables the use of turn-by-turn navigation, call and music control and the likes. Unfortunately, these modules aren’t offered at present, but Triumph says they will be launched in a couple of months’ time.

The motorcycle’s second generation TFT console is angle-adjustable and houses all the necessary information you’d ever need on a ride. This includes features like range, real-time efficiency, odometer, trip computer, gear position and rider modes, apart from the regular set of information. Also, the layout is customisable, and I particularly liked the chronograph-style layout. The visibility is clear and navigating through the features is fairly easy thanks to the joystick. Plus, all the switches are backlit too. Triumph also offers a single-button cruise control and keyless ignition as standard. Another notable off-road-friendly feature is the serrated footpegs which offer additional grip -- and they get removable rubber inserts too!

Triumph has equipped the Scrambler 1200 XC with a Thruxton-derived 1200cc High-Power parallel twin 8-valve liquid-cooled engine. This motor gets a dedicated ‘Scrambler’ state of tune with more emphasis on low-down torque. As a result, its peak torque figure of 110Nm arrives at 3,950rpm, with 100Nm arriving at just 2000rpm. That’s 90 per cent of the peak torque coming in with just a small throttle input! With so much torque at such low-rpm range, the motorcycle was able to go over the most challenging inclines and water crossings quite effortlessly.

The engine produces a maximum power output of 90PS at 7400rpm. Most of it is concentrated in the mid-range and you can ride at 100kmph in 6th gear with the motor sitting calmly at 3000rpm. 80kmph comes in at as low as 2500rpm and it is evident that the gear ratios bring out the best of the bike’s low and mid-range performance. The shifts feel effortless thanks to the assist clutch and the gears slot into place with a positive click. Also, the slipper action made it a hoot to downshift aggressively with relative safety on twisty roads. However, to mitigate wind blasts at high speeds, you might feel the need for the flyscreen that is available as an optional accessory. In case you were wondering about its fuel efficiency, Triumph claims a figure of 20.4kmpl.

During our ride, we mostly stuck with Road, Rain and Off-road modes. Off-road mode allows for deliberate wheelspin just to keep the momentum going and cuts in immediately when it senses too much of it. Essentially, its sensitivity is just about enough to make you feel like a pro. However, in Rain mode, the electronics cut in even at the slightest hint of loss of traction and that makes it perfect for wet roads. That being said, this mode results in a major loss of momentum especially on loose, sandy surfaces as it misinterprets the terrain as being slippery. Road mode offers a linear power delivery and the traction control ensures there are no surprises when you twist your wrist. The intervention is fairly apparent both in terms of traction control and ABS. I didn’t use the Sport mode as the riding conditions didn’t really allow us to fully flex the Scrambler 1200’s muscles.

Further enhancing the motorcycle’s dynamics are the top-spec underpinnings. The front end gets a 45mm Showa inverted fork and the rear features twin Ohlins shock absorbers with piggyback reservoirs. Both are fully adjustable, offering a massive 200mm of travel at both ends. The damping is ever-so-slightly on the stiffer side compared to the Triumph Tiger 800 because there is no bulky bodywork up front like the Tiger to compensate for the added weight. That said, the suspension stroke is well controlled to ensure there are no shocks transferring to the rider. This scrambler goes over sharp speed bumps and large foot-high rocks like it’s nobody’s business. And when you hustle it through some twisty roads, there is no mid-corner wallowing either, despite the long-travel suspension. Moreover, the large 21-inch front coupled with the relatively smaller 17-inch rear spoke wheel are also responsible for its composed mannerism on rough terrain. But on the flip side, the larger front wheel along with a relatively relaxed rake angle (at 25.8 degrees, it is 2.4 degrees more than the Tiger 800 XCx) do result in a bit more effort to manoeuvre the wide handlebar in the twisties.

The Metzeler Tourance tyres offer brilliant grip both on and off the road, and I was able to make use of the sidewalls as much as they permitted. For an even more leech-like grip off the road, Triumph also offers Scorpion Rally tyres approved specifically for the Scrambler 1200. Another great practicality aspect about this motorcycle are the cross-laced wheels which allow the bike to run on tubeless tyres.

As far as stopping power is concerned, the twin radial Brembo M50 calipers do a stellar job in offering powerful and progressive retardation. Even the rear brake felt communicative on the road, and in off-road mode the ABS for the rear is switched off to allow for some sideways action.

The Triumph Scrambler 1200 is available in two variants internationally -- the XC and the XE -- of which the Indian market gets only the base XC variant. Compared to the former, the latter gets one extra riding mode, Off-road Pro, and 50mm longer travel suspension apart from sophisticated cornering ABS. Triumph chose not to bring in this variant as its price will end up intruding into the Tiger 800’s territory, thereby resulting in possible cannibalization of its own products. Moreover, the extra-tall seat will be a bit of a hassle to manage for most Indian riders, and the higher-spec version will find fewer takers considering the genre in which it caters to is already niche.

For Rs 10.73 lakh ex-showroom Delhi, the Triumph Scrambler 1200 XC offers stellar value for money for the kind of kit it offers. It gets a lot more off-road-ready bits than the base road-biased Triumph Tiger 800 XR which is a whole Rs 1.26 lakh dearer. Interestingly, the equivalent off-road capable Tiger, the 800 XCx, costs a massive Rs 3.3 lakh more. You can use this premium to get yourself a whole load of accessories, riding gear and make the Scrambler 1200 an even more wholesome bike. Plus, less bodywork than the Tiger means less parts to replace in case you drop the bike - something which happens quite often while off-roading.

That said, it may not be practical thanks to the high-set exhausts and tall seat but it is versatile enough to do a fair bit of city rides, highway runs and even cornering on the ghats. So as far as the pure joy of motorcycling is concerned, this is right up there in the list of bikes that you need to have in your garage. It may not be a primary bike but it is a perfect second motorcycle that does everything that the scrambler is supposed to do.

The Triumph Scrambler 1200 XC’s only worthy rival is the Ducati Scrambler Desert Sled, which is less expensive by Rs 80,000. However, it also lacks the kind of underpinnings, sophisticated electronics and brute power which the Brit motorcycle offers.