Can this be the bike to propel single-cylinder REs into a bold new direction? 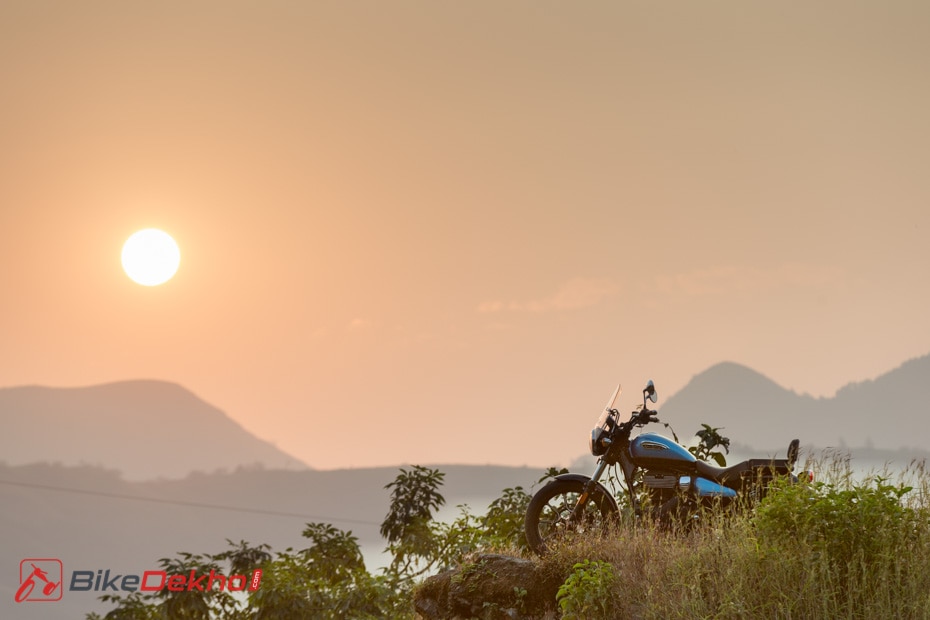 What Is A Meteor?

A meteor, also called a shooting star, is a small body from outer space that enters the Earth’s atmosphere, burns up from the resultant friction and leaves a visible streak of light across the sky. In Royal Enfield’s case, the Meteor was a near-700cc parallel-twin that it produced back in the ‘50s, a name that it has now resurrected for the bike which will carry the brand into the next generation. The 2020 Royal Enfield Meteor 350 is the first bike to cradle the fabled 349cc J-platform engine that will eventually replace RE’s ageing 350cc UCE motor. It also has the unenviable task of filling the void left behind by the discontinuation of the Thunderbird.

So, does the Meteor 350 have what it takes to shoot RE into a bold new direction? That’s what we’re here to find out. But first, some important questions that need answering...

Is The Trump Thump Still There?

Piffling as it may seem to some, the absence or presence of the signature ‘heartbeat’ heard on previous RE singles is enough to attract or hold off swarms of potential buyers. And fortunately for the Meteor, RE has managed to etch its signature soundtrack from the old vinyl onto the new CD. The Meteor belts out a lovely, deep thump even though its beat is noticeably faster than that of the ol’ UCE mill. It’s loud enough to be clearly heard at highway cruising speeds too, making overtakes a wonderfully sonorous affair.

Are The Vibes Still There?

Of course there are vibes. You’ve got a piston that’s nearly 3 inches across, stroking 8 and a half centimeters up and down, thousands of times every minute. But the old pushrods have been ditched and the single camshaft now sits in the cylinder head; there’s a balance shaft present; and RE has done away with the chain primary drive, so in terms of construction, the J platform is a significant step up from the medieval lump that powers the Classic 350. The end result is that the crippling high RPM vibrations are a thing of the past, and steady blood supply to the rider’s palms is now maintained all the way up to the redline. Sure, there is a little pulsing at lower RPMs and the engine does jolt you a bit when it lugs, but overall, refinement levels are a huge step up. The engine still doesn’t feel quite as well isolated as something like the Benelli Imperiale 400, but it definitely matches that other smooth single-cylinder Royal Enfield, the Himalayan.

Can I Commute On It?

You can commute on a Panigale if you’re mad enough. The question is, how comfortably can you commute on the Meteor? And the answer is quite comfortably indeed. Don’t be fooled by the 191kg kerb weight on the spec sheet -- a 765mm seat height and loads of steering lock mean that paddling and filtering through traffic is an absolute breeze. So is pulling in the clutch and shuffling through the slick-shifting 5-speed ‘box, but thanks to a good spread of torque, you won’t need to do that much. With 25 of the 27Nm available at just 2000rpm, the motor will dutifully chug along at 30kmph in 4th, but if you need to get up and go from this speed, a downshift will be necessary.

Further aiding comfort is the reasonably good suspension setup that manages to handle speed breakers and potholes quite well, but a lack of travel and a stiff setup at the rear means that sharper and shorter imperfections like expansion joints or unlevelled concrete block interfaces will batter your derrière. This thudding over sharp bumps stops us a few steps short of calling the setup plush, but it’s certainly closer to the plush end of the scale than the back-breaker end.

The Meteor does have a hugely commodious rider’s triangle, so much so in fact, that riders shorter than 5’6” might just find it a bit too roomy. With the pegs and handlebar both being quite forward-set, you’re placed in a ‘C-shaped’ position with arms and legs both outstretched, and the vertically challenged will have to shuffle forwards onto the uncomfortable, narrow bit of the seat to comfortably reach the controls. But a bolt-on fix like more sweptback bars or risers should fix this. Even angling the existing handlebar further back should bring relief (provided the cables and wires allow it).

Can I Tour On It?

You can tour on a Panigale if... Well, you get the point. On the older 350s, you had to live under the 80kmph ceiling thanks to the vibes. But the Meteor is a real mile-muncher, because it comfortably sits at 100kmph in 5th, and can do so all day long. The window from 90-105kmph is where it’s happiest on the highway; anything lower and you’ll need to downshift to rediscover the meat of the powerband, anything higher and you’re beginning to exhaust the 20.5PS on offer. We do wish the Meteor could push just that little bit higher before starting to feel breathless. On the upside, fuel-efficiency figures for the J platform engine are quite good, but at just 15 litres, the fuel tank capacity and range are considerably smaller than those of the Thunderbird.

In addition to the engine being able to cruise all day long, you’ll find yourself being able to hang in there as well, because the seat is roomy and well padded, keeping your butt pain-free. The top-end ‘Supernova’ variant we received (which sits above the Stellar which sits above the Fireball) came with a sizeable front screen that does a good job of keeping the wind off your upper torso and most of your helmet without impending your vision. But riders of a certain height will find their heads on the boundary of the screen’s wind shadow region, leading to high-frequency buffeting that can be hugely fatiguing over long periods. On the upside, the screen can be adjusted. On the downside, you’ll need tools and time to do it.

When the road stops being straight, the Meteor doesn’t stop being fun. Light and neutral steering makes it predictable through the twisties, masking the bike’s weight and giving you the confidence to push harder and harder, until all too soon, you find yourself dragging the footpegs. It brakes pretty well too, coming to a stop even quicker than the already improved Classic 350 BS6. But you’ll need to trust the dual-channel ABS and jam on the levers if you want to drop anchor in a hurry, because the unbranded brakes aren’t the most feelsome around, and lack initial bite.

Can I Really Tour On It? Like, Ladakh, Bro?

You probably can’t do Ladakh on a Panigale. But the Meteor should do just fine. Fuel-injection, so no problem at high altitudes; tubeless tyres, so punctures are easy to patch; and the pretty impressive 170mm ground clearance is only 10mm less than the Honda CB500X that’s listed under the ‘Adventure Tourer’ section of Honda’s website. The more even power delivery from the new motor should also mean better gradeability in the steeper sections, but if when you do happen to tip over, you better hope you have an extra pair of hands to help you up. That 191kg can only be masked on the move.

To the uninitiated, the ‘Tripper’ is a standalone colour display pod next to the speedometer that hooks up to your phone via Bluetooth to provide turn-by-turn navigation data. So, how does it work? Great! Sort of. After a perfectly acceptable amount of faffing around, we were able to pair up our phones with it, and seconds later, turn-by-turn navigation was up on the screen. The system is still being developed so it wasn’t a bug-free experience. The RE app, through which navigations are shared onto the screen, lacked connectivity to other apps, so getting coordinates from WhatsApp or Google Maps wasn’t possible at the time of the test. RE say that these features will be rolled out soon.

Why Less Torque Than Classic? Is It Slower?

Yes, the spec sheet tells you that the 349cc J Platform motor is 1Nm down on the 346cc UCE powerplant. But in the real world, thanks to the better spread and delivery, and thanks to being able to use a wider rev range, the Meteor is loads quicker than a Classic 350. Like, SEVEN seconds quicker to 100kmph. Flat out, it’ll knock on the door of a speedo-indicated 120kmph, where the Classic BARELY manages 100kmph even in its BS6 guise.

Will Bits Fall Off?

Engine vibes weren’t the only shortcoming on the old 350s, the bikes also felt as crudely put together as the motors powering them. Over time, and especially after the introduction of the 650s, RE has stepped up its game when it comes to build quality, and the Meteor is the next step in that journey. Over the 800kms spent with it for this road test, the Meteor was punished over poor roads and on fast highways, and through it all, everything stayed intact. There wasn’t even a trace of oil sweats. Neat! The switchgear feels reasonably good to touch, and the old-school rotary design adds some much-needed character to the bike (though it does take some getting used to). The lustre of our dual-tone paint scheme is pretty commendable too, and even though most of the chrome parts are actually plastic underneath, the finish is well executed.

Like the 650s, the Meteor isn’t really an attention grabber, which is a bit surprising considering the amount of anticipation and hype that surrounds this bike. But then again, the stance and form factor are VERY similar to the Thunderbird X. RE has played it safe on the design front, with an appearance that’s neither classically minimalist nor too busy. Our favourite touches include the LED DRL ring around the headlight and the teardrop-shaped fuel-tank, the top of which swoops quite steeply down to the rider’s seat, giving the bike more than a touch of Harley-Davidson. One thing that does greatly work in the Meteor’s favour is its significant size, which is even more exaggerated thanks to the large front screen on the ‘Nova.

So, is the Meteor shooting Royal Enfield into an exciting new direction? This new J Platform motor is a clear step change from the UCE, making the Meteor 350 a far more well-rounded motorcycle than any of the previous 350s. It’s not just the engine, the gearbox feels more grown up too and the bike handles itself and its weight rather well. But at the same time, the Meteor isn’t breaking new ground either. RE has managed to produce a capable and commendable motorcycle but it has done so in an orthodox fashion, ironing out the biggest chinks in the Thunderbird’s armour and making small, incremental gains in the remaining areas.

A plush ride and a bit more poke from the engine would’ve made the Meteor 350 a far more characterful and engaging motorcycle, the likes of which we’ve never seen from a single-cylinder RE before. For the time being, though, the Meteor, starting at Rs 1,75,825 and going up to Rs 1,90,536, is a new and greatly improved Thunderbird X, which is good enough for the hardcore RE fans. But is it enough to draw buyers away from that other new classic bike from the showroom with the big wing? Stay tuned for our comparison to find out.