Back in 2001, when the country was starving of a proper performance motorcycle, Bajaj Auto listened to their prayers and fed them with its round-headed sporty twins- the Pulsar 150 and 180. The bike used to come in a basic body design then and with the passage of time, the Pune-based manufacturer implemented  its “change with time” philosophy in it that eventually made it one of the most beloved bikes in the Indian subcontinent. 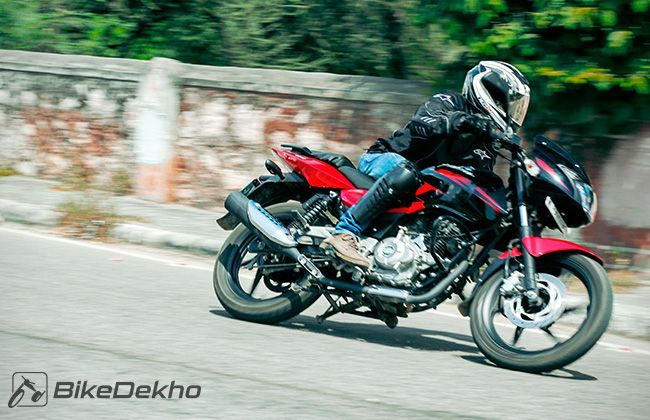 The Cons: Rear brake lacks bite under harsh braking, Not so smooth gearbox and suspension setup a bit stiff.

The Pulsar family presently consist of 8 members ranging from 135cc to 220cc engine capacities. Today, we bring you the road test review of the sturdy 180cc hearted Pulsar that we rode extensively on the straights and twisties of Jaipur.

The new avatar of the 180cc Pulsar is considerably bolder and aggressive than its predecessors. The recent upgrades seen were the refreshing dual-tone paint schemes and a few touch-ups here and there. The front gets the same signature wolf-eyed pilot lamps, which gives a predatory look in dark. The stylish tank flaps bolted on the fuel tank are the same that used to come with the Pulsar 200, but these don’t say “oil-cooled”.

The overall body styling of the Pulsar 180 has also been derived from its above stated elder sibling that used to come long time back. The bike looks even more appealing and eye-catchy in dual shade, with impressive patterns on the fuel tank, front cowl and side body panels. The twin tank flaps do add a lot of character and enhances the visuals. The 15 liter fuel tank remains unchanged and offers a good riding posture. Taking the aesthetics to a whole new-level, Bajaj has integrated sporty split step-up seats in the bike that look super stylish and classy. The rear end of the bike remains untouched and features the same dual LED tail lamp section along with robust split body grab rails. The fat rear tyre along with half chain cover exposes the bones and muscles quite impressively.

Bajaj Pulsar 180 has been bolted on a double cradle frame and measures 2,035mm x 765mm x 1,115mm (LxWxH) end-to-end. A wheelbase of 1,345mm along with a minimum ground clearance of 165mm ensures an agile handling with good stability around the corners. The bike has total kerb weight of 145kg and the seat is set at a height of 790mm due to which short heighted riders might feel uneasy at first.

Bajaj Pulsar 180 has been equipped with an easy to read and informative digital-plus-analog instrument cluster with amber backlit display. The trapezoidal section shows speed in numbers along with displaying few other entities digitally such as odometer, twin tripmeters and fuel gauge. Below that, you will find four indicators lined-up in the following sequence: Turn, Neutral, High Beam and Low Battery Warning. The tachometer shows the reading from 0 to 12,000rpm and now features a rev limiter indicator as well. Bajaj has removed the side stand indicator from the dual-toned Pulsar 180.

Talking of switchgear, the company has used good quality plastics in designing them and needless to say, the switches and buttons deliver a decent feel while operating. The left switch box in Pulsar 180 comprises of high/low beam switch along with turn indicator and horn switch. The right switch box comes integrated with engine kill and headlight ON/OFF switches with an electric start button. As of changes, Bajaj has fitted a push-button type turn indicator switch instead of self cancelling one that was found in the previous Pulsars.

Seating comes thickly cushioned and well-padded in the Pulsar 180, but however, fails to provide a top notch comfort on longer journeys. The split step-up seat has been taken from Pulsar 200, which comes in the 220cc version as well. To make the handling even more agile and sharp, clip-on handlebars have been fitted in the bike that actually makes sense. With this, the Pulsar 180 scores exceptionally well on the grounds of handling and maneuvers with ease, giving a big plus point in tight city traffic. The seating position is a bit upright that prevents any back pain on longer rides. The footpegs have been bolted a few millimeters backward in comparison to regular commuter motorcycles to offer a sportbike feel. Like the retired Pulsar 200 and the existing Pulsar 220, the anti-scratch tank pad has been sticked on the fuel tank to avoid those painful scratches.

Bajaj Pulsar 180 has been loaded with a 178.6cc, four-stroke, single cylinder engine that comes equipped with Bajaj’s patented DTS-i (Digital Twin Spark) technology. The refined five-speed mill cranks out a maximum power of 16.8bhp at 8,500rpm along with a peak torque of 14.22Nm at 6,500rpm. The bike feels smooth on open stretches and climbs up to around 90kmph quite effortlessly. Post that, you need to put in some endeavour to test the limits.

During test runs, we managed a top speed whack of over 120kmph and this version seemed a lot calm and stress free than the earlier P180. On pushing hard from the standstill, the bike sprinted from 0 to 60kmph in just 6 seconds and crossed the 100kmph barrier in another 7 seconds, which seemed quite relentless. Talking of mileage, the bike returned a combined fuel economy of 49kmpl (that included 60 percent highway and 40 percent city riding), which is quite decent as it came from a 180cc engine.

Bajaj Pulsar 180 has improved drastically when it comes to stability. The bike rides on 90/90 - 17 front and 120/80 - 17 rear tubeless tyres that offer a good and smooth ride quality. The suspension is tuned on the stiffer side and comprises of telescopic forks upfront and 5-step adjustable Nitrox shock absorbers at the rear. Due to a bit stiffness, you won’t be getting the expected amount of comfort for what Pulsars are known for. With slightly raised clip-ons in stock, you will find yourself in a decent riding posture that is well-suited for daily riding.

Now coming to braking, Bajaj has assisted the bike with a good and bitey pair of brakes. The front wheel locks up by a powerful 260mm disc while the rear wheel gets a 130mm drum brake. However, in case of harsh braking conditions, the rear brake lacks bite and the need for a rear disc brake might arise in your mind.

With a price tag of Rs. 74,972 (ex-showroom, Delhi), the Pulsar 180 seems quite a worthy value for money package. The bike comes with stunning and bold body dynamics and an aggressive factor that never fails to impress. However, the suspension and comfort level might not seem upto the mark that you hope for, but that’s not a reason to worry as this 180cc Definitely Male from Bajaj will surprise you on other aspects such as engine refinement, aesthetics and reliability.

Our personal call is that if possible, Bajaj should come up with an ABS and rear disc brake with this bike (at least as an option) in future as its closest rival, TVS Apache RTR 180 features both and such safety equipment takes rider safety to an altogether different level. Summing up the things, the Pulsar 180 is a worthy and tough streetfighter from Bajaj that gets some really punchy elements and the trust of third largest Indian auto maker, all this you get at a very worthy price.