The 390 Adventure could be the perfect KTM for a country as vast and varied as India, but is it? 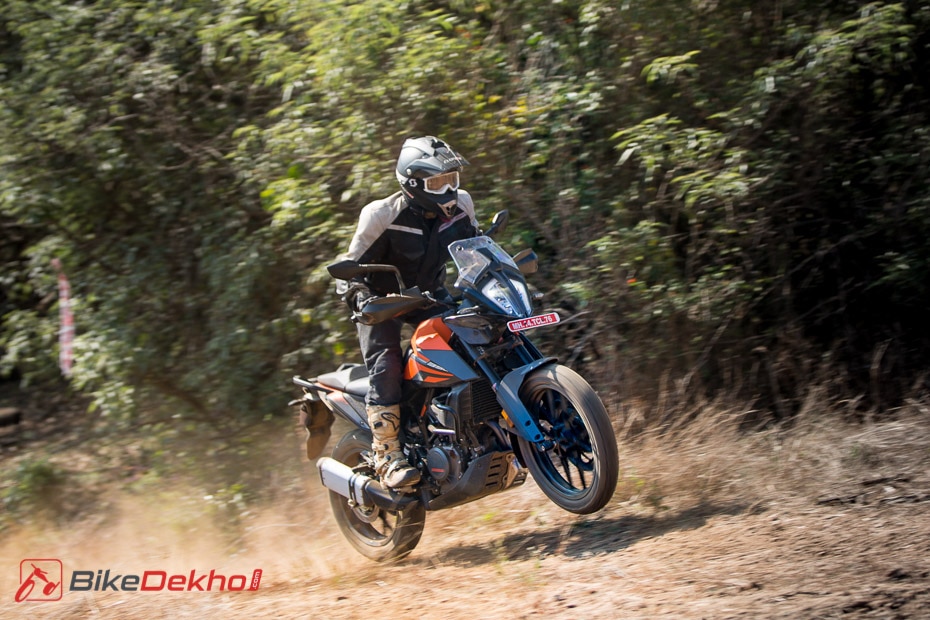 Over the last eight years KTM has established that its bikes can be potent yet friendly enough to help riders upskill, while being accessible in terms of price tag too. While the Austrian bike maker built its global reputation around off-road motorcycles, the story is a bit different in India, where KTM carved its niche with streetbikes that offered and performed far better than anything we were used to then. Now, after many years of waiting Indian riders are finally getting a KTM with ‘Adventure’ in its name! Does the 390 Adventure also have the KTM formula for success down pat? Will potential Royal Enfield Himalayan or Hero XPulse 200 owners head to KTM showrooms?  The Rs 2.99 lakh price tag for the feature-loaded 390 Adventure is sensible enough, but who exactly is this motorcycle for?

There’s no way you’d mistake this for anything other than a KTM. The LED headlamp and the steel trellis frame from the 390 Duke are instant giveaways. The shade of orange would seem obviously KTM too, but a white and black colour combination is thankfully on offer too.

While it is closely related to the Duke, the Adventure embodies KTM’s rallying pedigree with its tall and watchful stance. The headlamp sits high and forward-set, crowned by a clear windscreen above it, and thus has a few additional panels to mask the gap to the forks. The 14.5-litre all-plastic tank looks purposeful and the matte finish gives it a subtly classy look. The slim exhaust can finished in brushed steel and the split LED tail lamps add some distinctiveness to the rear.

It looks all new from that angle -- not that you will be confused, since the 390 ADV is much larger than other KTMs! It looks and feels a size larger than the Dukes and RCs. The wheelbase is a massive 70mm longer than the Duke and thanks to the longer-travel suspension pushing the ground clearance up by 25mm (to 200mm now), it literally looks down on them.

There are plenty of off-road cues like the knuckle guards on the wide handlebar, the coarse finish on the side panels to give the rider a better hold while standing up and riding, and the big serrated footpegs. The 390 ADV uses cast-alloy levers with a folding steel tip for the gear pedal and a bolted-on steel tip for the brake lever. These will absorb hits from rocks better than all-alloy units. However, KTM could have opted for steel gear and brake pedals as these are less likely to snap off when riding off-road. Also, instead of a 21” front wheel the ADV uses a 19” front wheel, which feels odd given the “Adventure” tag. If you compare the dimensions of the 390 ADV to the Royal Enfield Himalayan’s, you can see that the RE has it beat in some key areas. But there's one key area where the KTM has the Himalayan beat: weight.

The elephant in the 390 Adventure’s tent is its seat height. At 855mm, the seat is higher than the Duke by 30mm! This means 5’6” riders will be tiptoeing when at a standstill. However, taller riders will rejoice that there finally is a KTM that fits them well. Once in the saddle the 390 ADV will feel comfortable for tall, short or wide riders and everything in between as the wide handlebars and the mid-set footpeg position create a nice and upright stance. The firmness of the seat cushioning is just right for covering long distances in comfort too.

During these journeys the windscreen, adjustable by 40mm using an Allen key, should keep windblast off the rider. The pillion has an equally spacious and comfortable seat and the large grab rails are reassuringly handy, though the shape of the latter will make mounting saddlebags a bit difficult. However, KTM plans to introduce custom luggage for the 390 Adventure in the coming months and that should boost its touring ability massively.

While the 390 Adventure feels just right for the highways, it could have done better for off-road use. For starters, the bike feels a bit wider than expected when standing up. The handlebar is set a bit low too, and that makes finding the right stand-up-and-ride posture a little troublesome. However, we were pleasantly surprised to discover that its weight never felt cumbersome and picking up the bike even after a fall even on some steep inclines wasn’t too much trouble.

The 390 Adventure is available only in one variant but it is packing features commonly seen on bikes that cost twice as much. As it is equipped with an IMU the 390 Adventure offers high-tech features such as cornering ABS and lean-sensitive traction control. Yes, it has traction control. The ABS is also equipped with an Off-road mode that recalibrates ABS intervention on the front wheel while allowing you to lock and slide the rear wheel. It works very well, cutting in smoothly and quickly when required.

The TFT display is the hub for accessing all the menus and even controlling the music and calls on a paired phone. In case you use GPS devices, there is a dedicated mounting point above the instrument cluster that you can use on long rides. The 390 Adventure also packs a 12V charging socket and a windscreen that can be adjusted by 40mm, but only when you’re stationary.

The engine on the Adventure has been carried over virtually unchanged from the Duke, but it feels just a bit smoother and less grumpier at low revs. Aside from the larger diameter of the rear tyre, there aren’t any mechanical changes to the gearing. This then points to the slight change in tune to make the engine compatible with the more stringent BS6 emission norms. Thankfully, the power has dropped by just 0.5PS while the 37PS of torque is unchanged.

On the road the Adventure feels familiar, fast and friendly. You will enjoy covering long distances on this immensely. The 390 motor had proved itself to be a capable long-distance companion and in this package it just emphasizes the point. It will sit at triple-digit speeds comfortably, and won’t hesitate to get there either. The larger 14.5-litre tank also promises to take you well over 300kms between fuel stops. However, don’t expect this to be a relaxing tourer: the frantic nature of the 390 still exists.

Which is why you will find the Adventure a bit tiresome when you eventually get to the off-road part. Under 3500rpm the responsiveness is muted, and so you rev it up, which results in a burst of power as you get past 4000rpm. This makes manoeuvering with finesse a challenge as the rear wheel doesn’t find traction smoothly. To make matters worse the traction control system isn’t sophisticated enough for off-road use, cutting in very hard over bumpy surfaces. Sure, it can be turned off, but the intervention never seems to go away completely. While amateur riders will get hot and bothered in this situation, the engine will keep cool in these tough and slow-speed conditions as it is equipped with a curved radiator fitted with two fans towards the edges.

First, let’s tackle the 390 where most people will spend most of their time: on the road. Here the Adventure feels like a Duke on stilts -- and we mean that as a compliment! Despite the 19” wheel, the added weight, the slower steering geometry and the longer wheelbase, it feels fun and precise. It surely isn’t as fast and pointy as the 390 Duke, but on a windy road it will always be within pouncing distance of its streetfighter sibling. The strong brakes, shared with the Duke, also instill the confidence to run at a fast pace. And if the roads are poor, the  Adventure will leave the Duke to dodge potholes while it scampers off into the distance. The upright seating position, the perfectly padded seat, the windscreen and the longer travel of the suspension will make this apt for the tourers out there. It will also gobble up broken surfaces or unmetalled roads.

However, push the 390 Adventure into anything wilder and things will seem unnecessarily daunting. Unlike other KTMs we have seen in India, the Adventure isn’t one to gently hold your hand and lead you on. There is an awkwardness to its off-road manners that makes it feel daunting rather than welcoming. You could blame this on the lack of additional travel from the suspension, the weight and the long wheelbase.

The Adventure’s 200mm of ground clearance, 170mm front suspension travel and 177mm rear suspension travel -- vis-a-vis the Himalayan’s 220mm, 200mm and 180mm figures, respectively -- prove that it could have done much more. Also, when you factor in that the 233mm ground clearance of a 790 Adventure is offered with a seat height that’s lower than the 390 ADV’s, the beginner bike credentials of the latter don’t sit right. The tyres too aren’t designed for off-road abuse and as we said before, the electronic intervention only compounds matters.

To its credit the 855mm seat height and the 177kg kerb weight is something you get used to fairly quickly. The 390 Adventure ended up masking its weight better than anticipated and proved quite easy to pick up after several trip ups in the rocky and dusty world. The small boulders also did the the tyres no favours, creating a feeling of skating very often, which can only be overcome with proper knobbies.

KTM might be offering the 390 Adventure in just one variant and two colour (orange and white) options but on the plus side, they've loaded this sole variant to the brim with sophisticated electronics. It also packs the sturdy crash protectors you see in these images as standard. In the future KTM is expected to launch a more premium variant which will feature fully adjustable suspension. You can also expect it to offer custom luggage and a taller windscreen from KTM’s PowerParts catalogue. However, spoked wheels are off the menu for the time being.

However, everything about the KTM 390 Adventure falls into place when you start calling it a 390 GT. This Adventure is actually a tourer, with rough-road capability, which should be enough for most people. Its spacious and comfortable ergonomics, its ability to tackle all kinds of roads and cover distances with ease will win it a lot of admiration and desirability. Aside from the tall seat height it should prove to be a great companion for city use too. Those of you waiting for an off-road machine to go seeking wild adventures on will have to wait a bit longer though. But if you are looking for a thoroughly capable and affordable tourer, you can’t go wrong with KTM’s 390 Adventure.