The Hero nametag is making a comeback to the 160cc party, but does the Xtreme 160R have what it takes to cut through the thick competition? 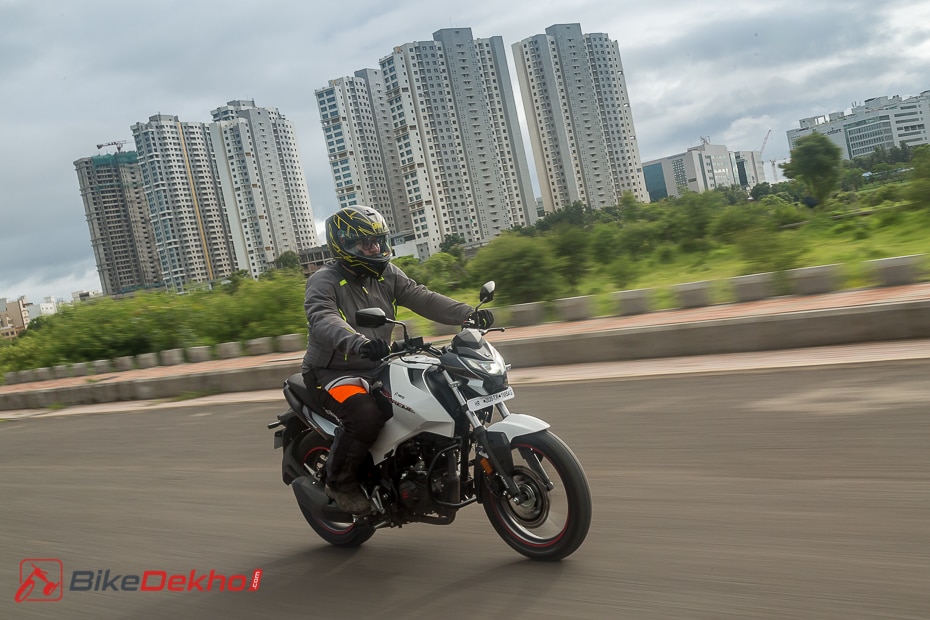 The 160cc segment is highly competitive, with motorcycles offering differing but persuasive blends of performance, practicality and features. Hero MotoCorp is the last major bikemaker to enter this segment and it seems to tick all the right boxes when it comes to styling, features and performance. Can the Xtreme 160R impress in the real world though? It is available in two variants: single disc and top-spec twin disc, which is the one we are reviewing here.

We first saw the Xtreme 160R in concept form at the 2019 EICMA as the Xtreme 1.R Concept. Incredibly, the compact design with tightly packed body panels has been carried over virtually unchanged from the concept to the production motorcycle. We especially liked the tail section design which gets a smoked LED tail lamp and pillion grab rails that are cleanly integrated into the tailpiece. It gets an impressive paint finish and comes in three colours: white, black and red. The fit and finish is good and the glossy paint quality adds to the appeal of the motorcycle. If we were to nitpick, the switchgear could have had a more upmarket design.

The Xtreme 160R’s compact dimensions are emphasised by its short wheelbase. So, it's no surprise that the single-piece seat steps up sharply for the pillion. Truth be told, it looks cool. The fuel tank capacity is on par with the segment with just the Yamaha FZ-FI having a larger 13-litre fuel tank. Despite the Apache having a significantly higher ground clearance than the Xtreme 160R, it is enough to clear the largest of speed breakers.

Despite its sporty styling, the Hero Xtreme 160R gets a comfortable and neutral riding position. As you would expect from a youthful naked, you do lean slightly forward to reach the handlebars, but it isn't all that much to make you feel uncomfortable even on long trips. Allied with the slightly mid-set footpegs, it should be convenient for riders of all sizes. The 790mm seat height is the lowest in the 160cc category and shorter riders should have no trouble moving the bike around in the parking lot while seated on the bike.

While the seat offers generous space, it has softer cushioning. It isn't much of an issue during city commutes, but could feel uncomfortable during longer rides. Given the Xtreme 160R’s compact dimensions, the pillion seat is on the smaller side. Pillions will find it sufficient, but they will be perched at the tip of the motorcycle and feel a bit of a stretch to hold on to the integrated grab handles.

The Hero Xtreme 160R is the first bike in its class to get all-LED lighting i.e. LED headlamps, LED tail lamps and LED turn indicators. The headlamp offers a strong and wide beam spread but the high beam, rather than lighting up the road ahead, is focussed higher. Like others, the Xtreme 160R too gets a digital instrument console.

It also features a cool-looking negative LCD display with large, legible fonts. It has the de rigueur tachometer, speedometer, fuel gauge, odometer and trip meter but misses out on a gear position indicator and range indicator. Unlike most of Hero’s 200cc bikes like the XPulse 200 and the Xtreme 200S, the Xtreme 160R doesn't get Bluetooth connectivity. While it is a talking point, we wouldn't count it as a major miss.

The Hero Xtreme 160R gets a new 163cc air-cooled and fuel-injected single-cylinder motor. Like Hero’s 200cc bikes, the Xtreme 160R uses a 2-valve head. It is the most powerful 160cc two-valve motor around and loses out only to the four-valve TVS Apache RTR 160 4V and Bajaj Pulsar NS 160. A major caveat in this comparison is that the performance data shown here, except for the Hero, is for the BS4 versions.

*-Test figures are for BS4 bikes.

This two-valve motor, as intended, offers the most performance in low to mid-range revs i.e. 3000rpm to 6000rpm, which is very helpful in the city where you can cruise at speeds as low as 25kmph in 5th gear. This, in turn, translates to a fantastic city fuel-efficiency. Not having to shift gears too much is all the more enjoyable as the 5-speed gearbox has a notchy shift action. On the upside, it doesn’t miss shifts.

Multiplying the usability of the motor is its refinement. It remains vibe-free in low- to mid-rpms with just a slight buzz felt through the footpegs at around 8000rpm. Not that you will want to rev it that high very often because it lacks top-end performance. As a result, the Xtreme 160R struggles to get up to triple-digit speeds. The Xtreme 160R feels comfortable cruising at speeds of 80kmph but you have to plan overtakes beforehand. It feels the strongest between 4000rpm and 6500rpm after which power tapers off. Instead of revving it to the 9500rpm redline, shift earlier at 8000rpm for quicker acceleration. Predictably, the highway fuel-efficiency figure drops down to 47.38kmph.

Overall, the Hero Xtreme 160R’s motor impresses in the city but not so much on the highway.

The Xtreme’s suspension deserves high praise. It gives a nice layer of cushioning over uneven roads without feeling nervous or sloppy. It absorbs most road undulations and keeps the rider well isolated from sharp potholes and edges. Its well-tuned setup feels soft but does not bottom out easily. The Hero Xtreme 160R packs a 37mm front fork setup by renowned suspension maker Showa and gets a 7-step preload-adjustable monoshock. It is commendable that Indian bikemakers are going for premium suspension, especially in the 160cc segment. Another example is the TVS Apache RTR 160 4V that uses a Showa monoshock.

Where the Xtreme impresses is with its handling prowess. It feels light and agile, especially in city traffic. Thanks to the short wheelbase and light kerb weight, the Xtreme responds well to the slightest of handlebar inputs. In the twisties, the 160R feels eager to dart into corners but does not feel twitchy doing so. It gets 100-section front and 130-section radial rear tyre. The MRF tyres grip well and help keep the bike stable under hard cornering and braking.

For braking, the Xtreme 160R gets a large 270mm front disc and an optional 220mm rear disc with single-channel ABS. Under our braking tests, the Xtreme took 38.81 metres to stop from 80kmph and 22.90 metres to stop from 60kmph. While these figures are on par with the segment, the brakes offer a good bite and feedback through the levers. We are glad to note that ABS intrusion is also minimal.

Overall, the Xtreme 160R is a fantastic handler and should keep novice and expert riders entertained through a set of corners.

The Hero Xtreme 160R impresses on paper and in some areas, in the real world as well. For one, at a starting price of Rs 99,950, it is one of the most affordable 160cc bikes in the market. It looks fantastic, is feature packed, gets a torquey motor and also rides and handles well.

When it comes to sportiness, it outshines the Suzuki Gixxer and the Yamaha FZ-FI with ease. However, the Xtreme 160R does have a formidable opponent in the form of the TVS Apache RTR 160 4V and we would need to get both motorcycles together for a comparison review to split hairs and identify the better one.

Where the Hero Xtreme 160R really excels is in the city. We can see it as the perfect ride for someone who wants an engaging yet comfortable motorcycle that is adept at tackling the urban jungle and won’t trouble your wallet either.