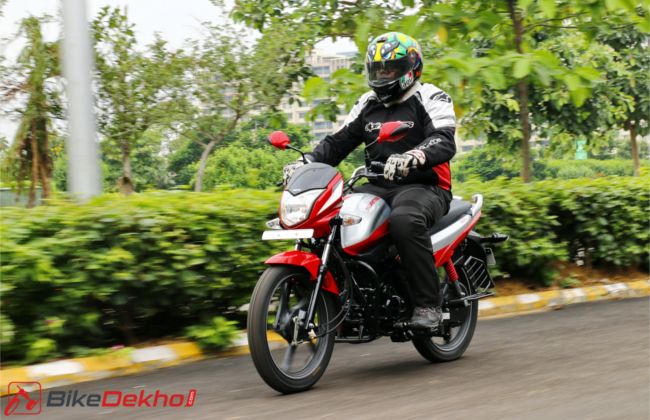 The Hero Splendor is a brand that needs no introduction to Indian masses. It is the highest selling motorcycle in India and despite being present for over two decades in our market; it still leads the sales chart for motorcycles. But in the recent few years, sales have slid for the bread and butter motorcycle of Hero MotoCorp and the Honda Activa has also managed to displace it from the top as the highest selling two-wheeler in India in 2016. To arrest this slide in sales, Hero has launched the new Splendor iSmart 110 which is also the first indigenously developed bike at its R&D facility in Jaipur.

With respect to styling, the Splendor iSmart 110 isn’t a motorcycle that will make heads turn. The design of the new motorcycle is a good balance between sober and sporty, which should appeal to many buyers. The angular headlight inspired from the Xtreme Sports looks good and the sculpted tank adds a dose of muscle while the rear section is petite. The i3S sticker on the tank is visually pleasing and there are no loud in your face graphics. The angular turn indicators, split grab handles and the reserve knob are neat additions. The speedometer is a simple analogue unit which is easy to read and also gets the benefit of side stand indicator while there’s a digital display for odometer and trip meter. Switch gear is basic while the tight panel gaps and rich paint quality are impressive. The Splendor iSmart 110 is also the first motorcycle in its segment to get automatic headlamp.

Among the biggest talking points of the new Splendor iSmart 110 is the new powerplant which has been developed in-house by Hero. The air-cooled, single-cylinder motor delivers 9.4PS at 7,500rpm and peak torque of 9Nm at 5,500rpm. Give it some gas and the bike picks momentum briskly (Hero claims it has the best acceleration in the segment). Mid-range performance though felt a bit dull but it did manage to hold speeds around 60-65kmph easily. The highlight of the motor is its refinement level, there is a slight amount of vibes that kick in around 40kmph but it never reaches an uncomfortable level. Also the new engine is also the only motorcycle in the commuter segment to be BS IV emission norm compliant. The i3S (idle stop-start system) also does its job without much fuzz. Stop at a red light and let the bike idle for five seconds after which the engine gets shut automatically, pull the clutch to engage first gear and the bike starts automatically.

The 4-speed gearbox offers slick shifts while the clutch is light. For a first effort, the Splendor iSmart's motor really does impress. But for a commuter buyer the biggest deciding factor is the mileage and according to Hero it delivers 65kmpl in real world conditions which is among the highest in the segment.

The riding posture is upright which means commuting on the bike shouldn't be really tiresome. While it does look similar to the standard Splendor iSmart, the frame of the motorcycle has been completely redesigned. Direction changes are effortless and through the corner also the bike feels composed. I took the bike on some broken roads, while the front telescopic forks did their job well, the rear unit felt a bit stiff for my likening. The drum brakes fared well but an optional disc brake should have been offered.

The new Hero Splendor iSmart delivers everything that is expected from a commuter motorcycle. The balanced styling, refined motor and agility are its forte. Also Hero has cleverly used the start stop tech to make it more frugal and appealing for buyers. The new Splendor isn't a standout product but for a first attempt of building an indigenously developed bike it is a job well done by the engineers. The Rs 53,300 (ex-showroom Delhi) pricing and the humungous dealer network of Hero makes the new Splendor iSmart 110 a great option for a commuter motorcycle buyer.