Published On Dec 12, 2018 By Praveen M. for Cleveland Cyclewerks Ace

A new bike from an unknown manufacturer - does the Ace Deluxe have what it takes to make a mark in our motorcycle market? 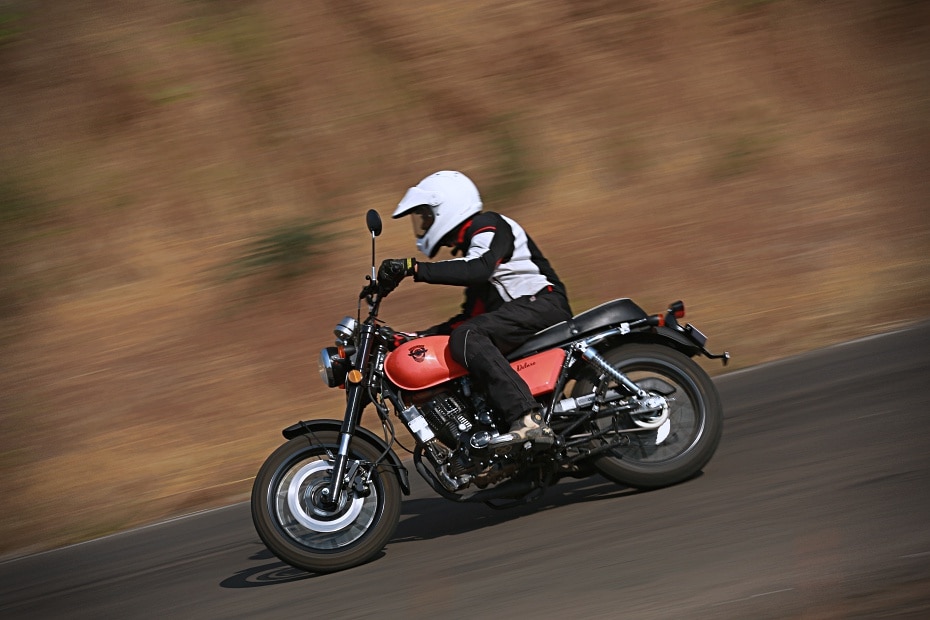 Every other manufacturer seems to be riding the retro wave these days. Royal Enfield is dominating this segment, at least for now, and recently, Jawa has jumped into this space too. Cleveland Cycle Werks (CCW), on the other hand, made their debut at the Auto Expo 2018 in India, and are working on setting up their dealerships across the country. The brand has its headquarters in Cleveland, USA, but sources parts from China. Laish Madison Motor Werks has partnered with CCW for its India operations to bring their bikes here via the CKD route, which, to an extent explains its high starting price tag of Rs 2.23 lakh (ex-showroom). We took the brand’s most affordable motorcycle, the Ace Deluxe for a test ride to see what this new entrant offers.

From afar, the Ace Deluxe looks simple, but pretty. You get a properly retro styling, with the orange paint on the body panels providing a neat contrast to the blacked-out powertrain and underpinnings. It evokes curiosity among onlookers as it is reminiscent of the recently-launched Royal Enfield Interceptor 650. However, the dimensions are quite compact, but more on that later. Coming back to the design, there are quite a few neat touches like the chrome nacelle for the headlamp, circular chrome rearview mirrors, offset fuel tank cap, ribbed bench seat and chromed out rear suspension.

However, the overall fit and finish leaves a lot to be desired. The side panels are a bit flimsy and are secured in place without a lock. Located below the fuel tank, the fuel cock is a tad on the inside, making it a bit of a hassle to reach it, especially when you’re trying to switch to reserve on the fly. Cost-cutting measures are easily apparent as you can see a number of rubber hoses near the engine area. We hope the quality of the hoses is good enough to sustain Indian weather. The two screws just below the tail lamp are an eyesore and could’ve been designed better.

Equipment levels are very basic considering the premium pricing of the motorcycle. You get a chromed out twin-pod analogue instrument console with a classic-looking dial. It definitely looks the part but lacks outright functionality. It only houses a speedometer, tachometer and an odometer, apart from the tell-tale lights. There’s no tripmeter, or even a fuel gauge, let alone other features like clock, service reminder and the likes. The switchgear works without any issues, but the quality is crude. The edges are sharp and it isn’t what’s expected from a Rs 2 lakh+ motorcycle. For added convenience, the bike comes with a hazard lamp function as well. CCW has gone with a halogen headlamp for the Ace Deluxe and bulb-type tail lamp and indicators - no LEDs anywhere. Even the headlight lens is of the prismatic variety, which does go with the retro design theme, but to be honest, it offers poor spread and intensity. AHO means the headlamp is on at all the times (there’s no LED DRL to circumvent this), so you’ll have to be careful not to drain the battery. It does get a kick-start lever though. As a safety feature, the engine does not turn on when the side stand is down. Interestingly, even if the gear position is in neutral, the starter motor actually cranks but the engine still stays off, which is redundant.

The flat bench seat has adequate cushioning to keep you comfortable even on long rides. Thanks to the easy-to-reach handlebars and centre-set footpegs, the riding position is quite upright. This setup makes the Ace Deluxe a very good candidate for laidback riding in the city, or on the highway. That said, the bike is genuinely quite small, with a seat height of just 760mm, which is even lower than the TVS Scooty Zest. While this will be welcome by shorter riders, taller riders might find the bike a little cramped.

The Ace Deluxe’s is powered by a Honda-derived 229cc single-cylinder carburetted, air-cooled pushrod engine produced by Lifan in China. It produces 15.2PS at 7000rpm and 16Nm at 6000rpm. These figures aren’t much, especially at a price point of over Rs 2 lakh. You get the Hero Xtreme 200R, which makes 3.2PS and 1.1Nm more than the Ace - all for a lot less than half the price of the Ace Deluxe. Given that it's derived from a Honda motor, the engine is reasonably refined, but there seem to be some serious issues with the gearbox. There’s just too much juddering in every gear, and it feels like you’re shifting from the first gear to the last - for every gear! Riding at crawling speeds is tricky as the engine tends to lug a lot.

The motor feels a bit relaxed at around 70kmph in fifth gear. This top gear is quite tall and slots in comfortably only above 60kmph. At 4000rpm, the bike touches 80kmph, but anything above those speeds is downright scary as the engine feels too strained - blame it on the faulty gearbox. To be honest, the bike really doesn’t give the assurance that it won’t break down. Fortunately, we did not experience any such issue, apart from the exhaust header nuts coming loose. Nothing a ring spanner couldn’t fix, but it was unexpected nevertheless.

On our performance test, the motorcycle accelerated from 0-60kmph in 6.68 seconds, and the true top speed we achieved was 96.92kmph. To give you a perspective, its nearest rival, the Hero Xtreme 200R is 1.7 seconds quicker to 60kmph, and reaches 100kmph from a standstill in 14.92 seconds. The Ace, on the other hand, took 13.11s just to reach 80kmph from zero. On multiple instances, we heard the clutch slip under hard acceleration in our tests, which isn’t exactly a good sign for a bike that’s clocked just a little over 1000km. The performance of the engine would’ve been a lot more promising if the gearbox worked flawlessly. We also heard a “clunk” noise from the engine, accompanied with a jerk every time we rolled off the throttle and then opened it quickly again. The fuelling itself was quite abrupt, but that alone isn’t enough to explain the noise from the engine.

Surprisingly, fuel efficiency is quite decent, with the Ace delivering 39.68kmpl on the highway and 33.98kmpl in the city. With its 14-litre fuel tank, you should theoretically be able to cover over 500km on the highway.

The Ace Deluxe is built on a single downtube frame with the engine as the stressed member. The front end features inverted forks, while the rear comes with a pair of regular shock absorbers. Ride quality is pretty decent with the suspension offering good damping over bad roads, and also helping the motorcycle maintain composure at higher speeds. However, very sharp bumps will find their way to your backside, but it’s nothing to be really worried about. Its 155mm of ground clearance is just about enough for it to not scrape the tops of tall speed breakers. With a 298mm front and the 210 mm rear disc, the brakes offer ample bite, but braking feels a bit too sudden. It needs to be more progressive so that the rider gets a better feel at the lever when the brakes are applied.

Show the bike some corners though, and it does feel a bit skittish, thanks to its sharp rake angle. Wrapped on 17-inch aluminium spoke wheels, the 110-section front and 130-section rear Ceat tyres offer decent grip, but the nervous front-end doesn’t exactly inspire confidence while cornering. The motorcycle also has a quite wide turning radius, which gets cumbersome in tight city streets. However, low-speed manoeuvring is made easier to an extent, thanks to compact dimensions, wide handlebars and low seat height. To give you a perspective, the bike’s wheelbase (1335mm) is 35mm shorter than the Royal Enfield Bullet 350, and at a kerb weight of 122kg, it’s quite light too.

The Cleveland Ace Deluxe is a good-looking retro motorcycle but it loses its appeal amongst legendary motorcycles from brands like Jawa and Royal Enfield. The “230cc-air-cooled-retro-bike” formula would’ve worked about ten years ago, but now the competition is way too stiff. Moreover, the hefty price tag of Rs 2.23 lakh (ex-showroom) doesn’t help with the bike’s case, considering the lack of features and the kind of riding experience it offers. You get way more powerful motorcycles for that price, with much superior build quality, not to mention wider service reach.

However, CCW has recently slashed the Ace’s pricing by Rs 38,000 for the first 200 customers only (post that the price will go back up). Even with the new price tag of Rs 1.85 lakh, the bike is still on the expensive side. It would need to be priced significantly lower, possibly under a lakh (ex-showroom), to actually make sense in our highly competitive small capacity market.