Published On Jan 31, 2020 By Team Bikedekho for Bajaj Chetak

Does the Chetak deliver on the premium e-mobility experience it seems to be promising? 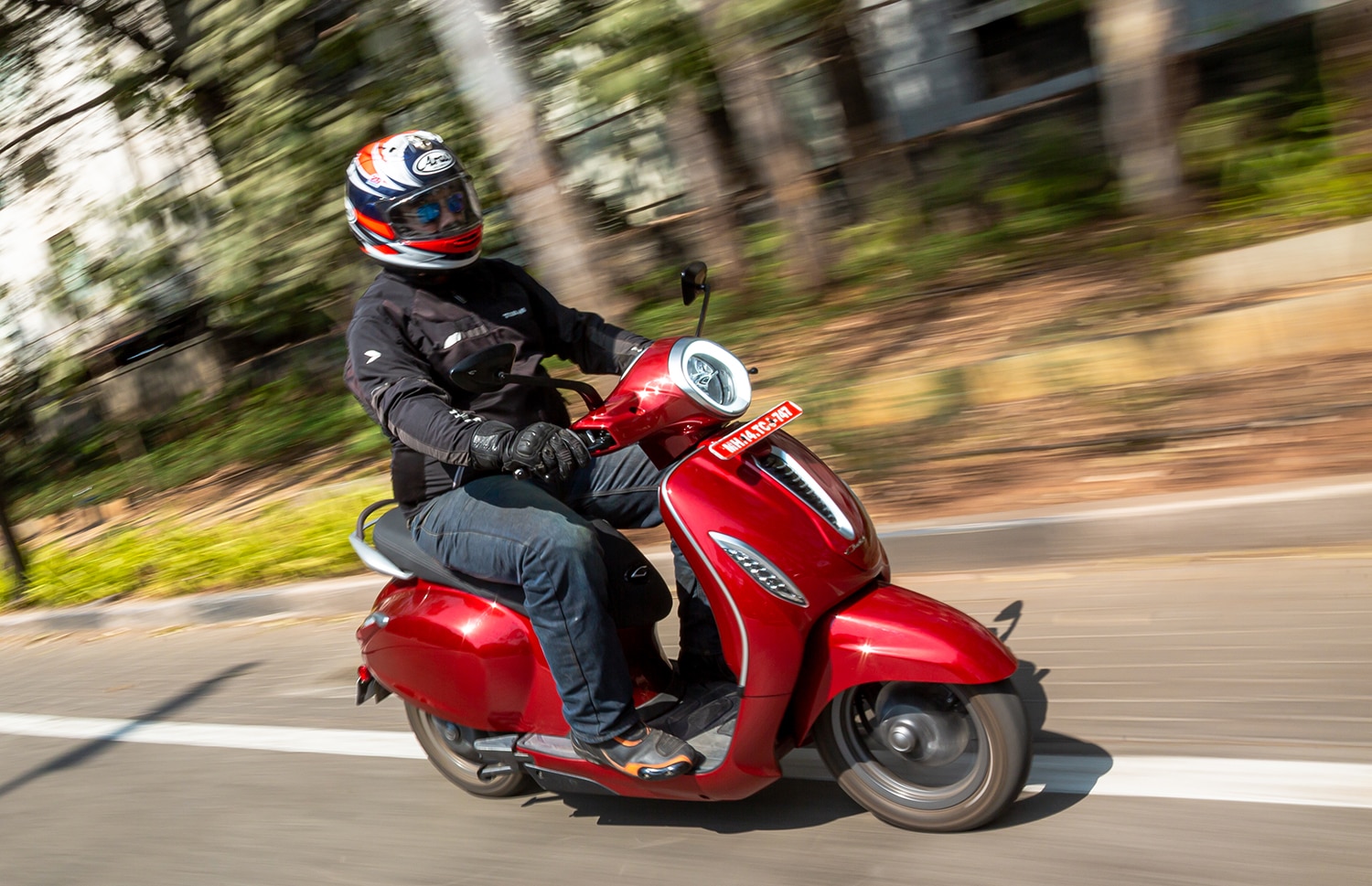 So far, no electric two-wheeler has provided the perfect solution for e-mobility in India. On one hand, you have the Chinese (or near-as-makes-no-difference Chinese) products that, while functional and (somewhat) affordable, lack any kind of desirability. On the other, you have start-ups like Ather, who’ve nailed the aspects of technology, features and quality, but demand a big price premium that seems to keep a lot of regular scooter buyers away. And let’s not forget, the sort of range and charging times any of these electrics offer are factors that don’t seem to have the masses completely convinced. Bajaj, with its new electric Chetak, seems to be playing in the latter space, promising a premium electric scooter experience, but nothing extraordinary in terms of range, charging times, or tech-laden features. So does the Chetak deliver enough on that promise of premium, everyday electric mobility for the other factors to not be a real concern?

“Is this a new Vespa?” is a question a lot of on-lookers could ask you while astride this scooter, if it wasn’t for the incredible legacy of the Chetak in India. This electric Chetak is a properly modernised version of that classic Italian design, whether it’s the way the front apron flows into the floorboard, or the bulging full-metal side panels or even the single-sided suspension and swingarm which have both alloy wheels fully on display. We really like the modern touches which include the almost round LED headlight, the sleek indicators and the triangular mirrors. All these really contribute to the neo-retro design. But we especially like the curvy tail which continues to flow well past the seat, making the rear part of the seat almost float over the scooter.

One thing that really stands out is the overall quality. The electric Chetak is an extremely well-made scooter - whether it’s the body panels themselves, the seat material or even the paint quality - they all seem to far surpass pretty much every other scooter out there, not just electric ones. The switchgear especially is worth mentioning. The piano black finish and the tactility of the buttons really puts it in a different league. And then there are some other little details here too which feel shockingly good, details which other manufacturers often ignore. The pillion footpegs and footboard for one - extremely well crafted and they open and close softly. Heck, even the side stand fits flush inside the side bodywork and has a soft close hinge.

Hop aboard the Chetak, and it’s an instantly familiar place. No strangely high floorboard here like some other electric scooters, as the battery pack is in the back. But the handlebar is set a little on the lower side, so if you’re tall or large, there’s a chance that it might foul against your thighs while taking tight U-turns. The floorboard space, while more than enough to accommodate even the largest riding boots, isn’t massive. So you won’t be carrying anything more than a large-sized backpack on it. That said, the seat itself is excellent. It tapers towards the front and contours down the sides. This allows even shorter riders to get their feet comfortably on the ground and even straddling the scooter between your legs when at a standstill feels very natural. Our only concern here is that the single-piece seat is primarily biased towards the rider and doesn’t seem to have too much room for a pillion. Still, a pillion should be able to rest assured knowing that they have a large grab rail to hold on to. Oh, and the top portion of that grab rail is coated in a soft-touch material, making it very easy to grip.

The Chetak isn’t really breaking the mould when it comes to features. In fact, when compared to its nearest competition, the Ather 450 and the TVS iQube Electric, it doesn’t get a colour TFT instrument cluster. What it gets instead is a round negative LCD unit which is informative enough and classy looking. But the curved cover is a little too reflective, making it hard to read under bright sunlight.

There’s smartphone connectivity using Bluetooth as well, which can help you locate your scooter, send you accident or theft alerts, and also pause and play music using a button on the left switchgear. We would’ve loved to see some navigation assistance as well, but since this is primarily an urban scooter, we don’t think this is a feature most buyers would really miss, at least in smaller cities like Pune.

One small feature we liked is the small luggage hook at the front of the seat. Actually, more than the hook itself (that’s pretty standard on most scooters), what we really enjoyed is that it fits flush into the seat behind a Chetak logo when not in use, and can be popped out just by pressing it.

The Chetak’s keyless start feature truly is a key-free affair. As long as you have the key in close vicinity to the scooter, the handlebar can be locked or unlocked, and the scooter can be started or stopped by using a single button under the handlebar. Even the front apron storage and the seat can be opened by the push of a button (on the handlebar).

Before we rode the Chetak, most of us here at BikeDekho, and I’m sure a lot of others out there, had apprehensions at the top speed being limited to just 60kmph. Especially when we were told at the launch that this 4.0kW electric motor (that’s peak power, sustained output is 3.8kW) when unrestricted can hit about 120kmph. Bajaj’s justification for this is to keep the drain on the 3.0kWh Li-ion battery pack under check and ensure its longevity. After riding the scooter, our concerns have been laid to rest for the most part. The 16Nm of torque this electric motor puts out is enough to propel this scooter off the line at least as quickly as any regular 110cc scooter. And while riding on city roads, you’ll never feel that 60kmph top speed limiting in any way. You can pass traffic with much aplomb by just twisting your right wrist.

That brings us to one of our favourite feature - auto kick-down. Now the Chetak has two riding modes - Sport and Eco. Sport feels peppy and responsive, while Eco feels a little slow and easy-going. But you can effectively ride in Eco mode all the time because as soon as you open the throttle beyond a certain point, the Chetak switches to Sport mode to give you a burst of acceleration. Throttle back down, and it’s back to Eco. This seamless mode-switching provides such a hassle-free riding experience that you never really have to be worried about what riding mode you’re in. We really wish more electric scooters implemented such a feature. And speaking of riding modes, there’s a Reverse mode as well, limited to 3kmph, which should help you park or unpark the Chetak on inclines.

Bajaj claims the longest range amongst any premium electric scooters - 95km in Eco mode and 85km in Sport. While we haven’t had a chance to properly range-test the Chetak, the claim seems quite believable. In our short test ride, the battery went from 100 per cent state of charge (SoC) to 76 per cent after riding it for about 22km in Sport mode in city traffic.

According to Bajaj, charging the battery from empty to 100 per cent happens in about 5 hours from a standard 5A electrical outlet. This charging time, coupled with the achievable range, should, in theory, be adequate for most urban commuters. But exploring this aspect more thoroughly will require a longer road test. Sadly, Bajaj doesn’t offer fast-charging even as an option, again in a bid to increase battery longevity. One interesting thing here is the Chetak will go into limp-home mode when the SoC drops to 10 per cent, and will come to a stop when it’s at 5 per cent. This ensures that you always have enough juice to operate the handlebar lock, open the apron storage or open the seat.

Riding the Chetak doesn’t feel all that different from riding a conventional scooter, and that’s a very good thing. And in some ways, it even feels better. The weight, for example, all 118kg of it is very well distributed, and the scooter feels light and flickable when moving through traffic. There’s enough stability here too, thanks to the Chetak rolling on 12-inch wheels at both ends. As a city slicker, we really have no complaints here.

As for the ride quality, it’s pretty ok for the most part. The rear suspension feels rather well damped over most surfaces. We didn’t have too many expectations from the trailing link front suspension to be honest. But at slow speeds, this front suspension feels really pliant. It’s when the speeds go up though that bumps on the road start thudding through to the handlebar. So as long as you slow down for speed breakers or potholes, you should do fine.

The brakes need special mention though. Go hard on the brakes, and the Chetak comes to a halt in a rather reassuring manner. Even the combined brake system works really well, with the front brake automatically engaging when you squeeze on the rear brake lever hard enough.

The Chetak is available in two different variants - Urbane and Premium. The Urbane model comes with a front drum brake as standard while the Premium features a disc brake. There are no other mechanical differences between the two variants. The Urbane is priced at Rs 1 lakh while the Premium comes in at Rs 1.15 lakh (both prices, ex-showroom Delhi).

There are some minor visual differences between the two variants though, mostly relating to the colour of the alloy wheels, floor mat, seat cover, and seat stitching. Also, you can get the Premium in four metallic colours - blue, black, red and hazelnut. The Urbane comes in two solid paints - white and fluorescent yellow.

As an urban mobility solution, the Chetak doesn’t really set a foot wrong. It’s got enough performance and even enough range (at least at first glance) to manage commutes in all but the largest cities. But when you compare the Chetak to its rivals, the Ather 450 and the TVS iQube, it falls a little behind in its feature list as well as its price. You see, at Rs 1.15 lakh (ex-showroom Pune & Bangalore), the Chetak comes out about Rs 7,000-Rs 8,000 more expensive than the other two offerings. However, what the Chetak does have on its side is some seriously premium feel, surprisingly more than our favourite electric scooter so far, the Ather 450. And when you factor in that a big player like Bajaj can make the Chetak available to more people, faster, by getting it into their vast network of ProBiking showrooms across the country, it would seem that it would be advantage Chetak!