The F3 800 is the newest entrant to the fiercely competitive supersport segment and seems more like a heart-over-mind proposition. 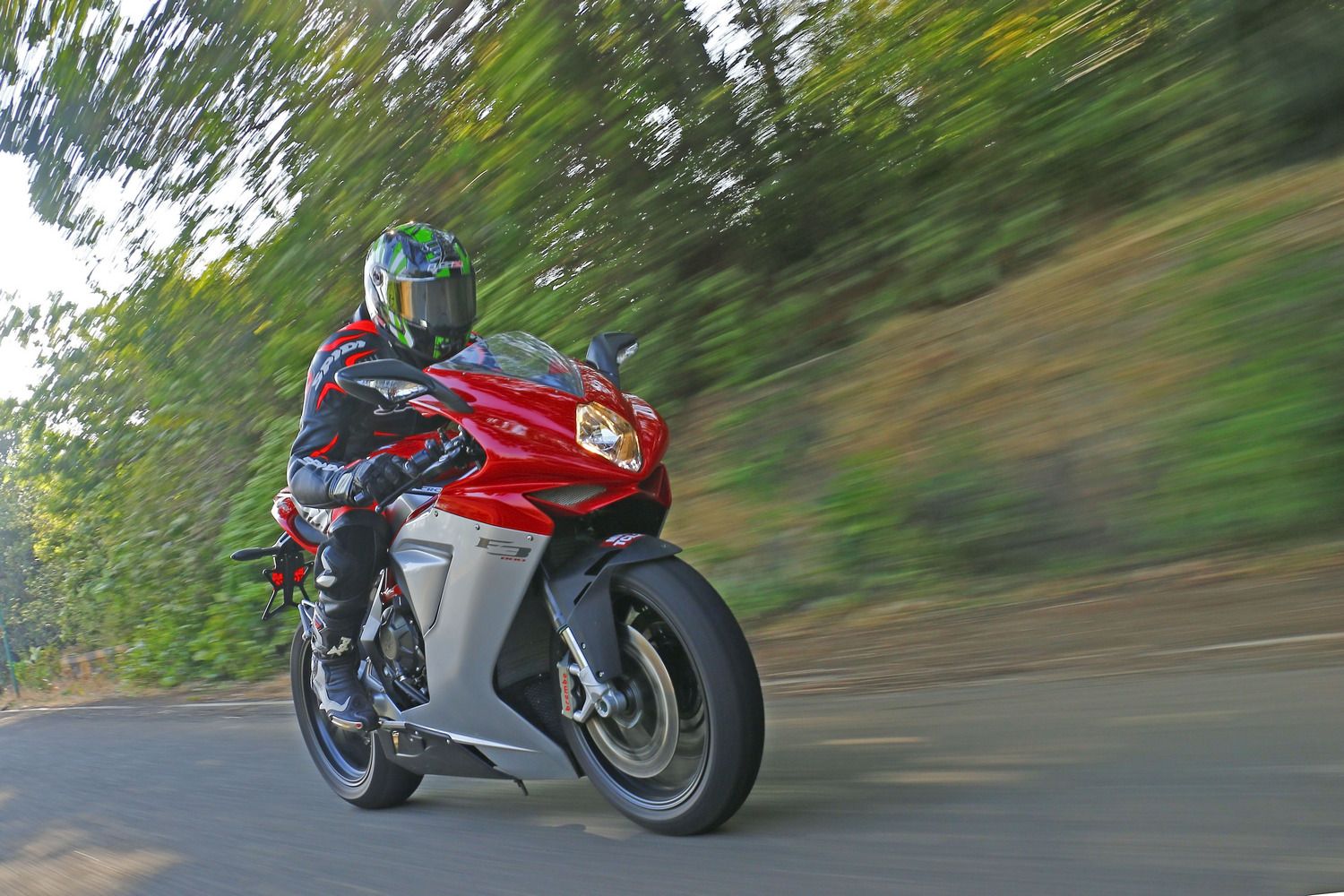 We’ve reached an age where 200PS of power for a sportsbike is de rigueur. It’s almost like the arms race, wherein nations are trying to outgun each other with bigger nuclear weapons. Manufacturers don’t seem to be concerned about the fact that a mere fraction of their buyers have the skill set to use all that power when in the saddle of a litre-class motorcycle. One rung below sits the middleweight supersport offerings. These offer the agility of a 600, while offering the performance of a litre-class machine. Most middleweights are now displacing in the region of 750-800cc, and we’re not surprised MV Agusta is following the norm too with their F3 800. Power and usability in one divine Italian package? We take a look.

The F3 800s genes are derived from the F3 675, which enjoyed a fair amount of success in the World Supersport Championship. Obviously more power was the need, and increasing the bore would have been easier but the engine was already oversquare. A bigger bore would have pushed power further up in the rev range making the bike unusable outside of a racetrack. Increasing the stroke is a complex process necessitating changes to the crankshaft and connecting rods but then you can extract more horsepower at lower revs. Despite the odds MV Agusta did just that, increasing the stroke of the motor, which has brought the redline down to 13,500rpm for the 800 from 15,000rpm for the 675, making the power more usable. So the F3 800 makes 148PS at 13,000 rpm, as compared to the 675’s 128PS made at a lofty 14,400rpm. Of course, the good news is that the rest of the motorcycle remains identical to the 675, which means the 800 weighs the same as the 675 while making 20PS more, which translates to a better power to weight ratio.

It all sounds good on paper but out on the road is where the real test is. The F3 800 has more of a track-bike feel dialed into it as the seat is high, with low clip-ons for that bum-up, wrists-down riding position. Overall, the bike is pretty compact, and I couldn’t help but wonder how my near 6 foot tall colleague will fit into the bike. He though seems very comfortable putting the bike through its paces.

Thumb the starter and you get to hear a three cylinder clatter that makes you wonder if the bike uses a dry clutch (it does not). This is quite typical of Italian triples, but as the revs rise, the sound is outright sporty and pleasing to the ears. The motor is quick to rev, and has vast reserves of power that become available post 6000rpm. Now despite the increase in stoke, the inline three remains an oversquare motor and is supremely responsive, once you hit the powerband. The 173kg dry weight pushes the power-to-weight ratio to a healthy 855PS per ton which puts it firmly in superbike territory. Facts aside, the way this bike induces tunnel vision post 10,000rpm is something to be experienced.

Ratios are tall, but the ferocity with which the bike accelerates, it sets your mind into overdrive. To get the bike beyond third gear was a challenge on the twisty roads, leaving vast reserves of power untouched. The ride also brought forth one niggle - the F3 uses a ride-by-wire throttle that isn't as communicative in the first quarter of the throttle opening. This makes it a bit of a guessing game in slower corners as to how much power is being fed and that can be bothersome on a bike as fast as this.

Also at low revs, gearshifts can feel notchy and I reckon, is due to the initial numbness of the throttle that makes blipping the throttle while downshifting a hit and miss. Once you wind open the throttle though, the bike performs flawlessly and pulls without any jerks, an improvement over the 675. The electronic quickshifter meanwhile allows you to rapidly upshift through the gearbox at high revs.

On an earlier occasion the MV Agusta Brutale 800 and its cat-like reflexes had me awestruck. The F3 800 possesses the same feline qualities but despite a sharper rake angle, it feels more in control. This has partly to do with the overtly committed riding stance that has you over the clip-ons. It also feels more connected in corners, holding a perfect line, while the compact dimensions allows you to switch directions on whim. It does lift off in first mid corner though it never translates to anything other than a mere headshake.

Cycle parts are properly exotic. The frame is a tubular trellis mated to a single sided swingarm. There are fully-adjustable Marzocchi upside down dorks upfront and a fully-adjustable Sachs monoshock damper at the rear. Tyres are super sticky Pirelli Diablo Rosso Corsas that seem to offer tons of grip, be in cornering or braking, which is courtesy twin 320mm discs upfront clamped by top-spec Brembo Monoblocs that seem precise enough to stop on a dime. Then there is the Bosch ABS which allows you two modes of intrusion that includes a race mode that comes with rear-wheel lift mitigation to prevent unintended stoppies under hard braking. You can completely switch ABS off too.

As with most superbikes, the F3 800 comes with a host of electronic rider aids, an inescapable requirement but thankfully the bike does not lose its soul in the process. There are four rider maps on offer - rain, normal, race and custom while Traction Control comes with eight levels of customisation and can be switched off as well.

After riding the bike for more than 200 kilometres, I had no doubts about the MV Agusta being a track focused bike, though redemption on the road comes in the form of its suspension setup, which while being firm has excellent damping properties. The 70km ride to Lonavala was covered at serious speeds, and the F3 dismissed uneven patches on the road with ease, the suspension soaking up road undulations without bothering the rider and leading to excellent high speed stability. The design is another draw, the MV Agusta borrows the timeless lines of its elder sibling, one of the most beautiful bikes in the world, the F4.

It looks strikingly similar to the F4, imitating its sinuous lines and you would have a tough time differentiating the two from the front. The F3 800 also misses out on an underseat exhaust but I like the side mounted triple stacked pipes over the F4’s chunky underseat unit. Going by the price though, a few things could have been executed better. The clutch and brake levers are finished in black and would look more premium in brushed aluminium. The controls for the electronics could have been easier to navigate too. The instrument cluster feels dated and feels cluttered when compared to the modern layout of the competition.

The MV Agusta F3 800 is bound to be a delight in the hands of experienced riders. Ballistically fast, yet unerringly precise to steer; the bike will cut through corners with surgical precision.  I doubt many larger bikes will be able to keep up with the F3 800 on a technical track like the Kari Motor Speedway, but it will take a seasoned hand to to get it done. The issue though is the 16.78 lakh (ex-showroom Pune) asking price, which is way more that the two other supersport bikes available in the country. The Triumph Daytona 675R might not offer as much power or boast the electronics of the MV, but at Rs 12.78 lakh (ex-Mumbai) it undercuts the F3 by four lakh rupees.

The Italian connection isn't a redeeming factor here as the Ducati 959 Panigale too costs Rs 13.97 lakh (ex-Mumbai), nearly Rs 2.8 lakh lesser than the F3. The Panigale is also track focussed and it gets more power, but it is heavier and a bit bigger. It comes with a host of electronics as well and is fitted with top-spec kit. Given the track-bred nature of the F3 800, it will be interesting to see the two slug it out on track. Till then, I reckon, as with most Italians, it is a matter of heart over head here. The MV Agusta might not seem the sensible choice but it plucks at the heartstrings more than most Italians do.