Is there more to the BS6 Suzuki Access 125 than leaving the world a slightly cleaner place? 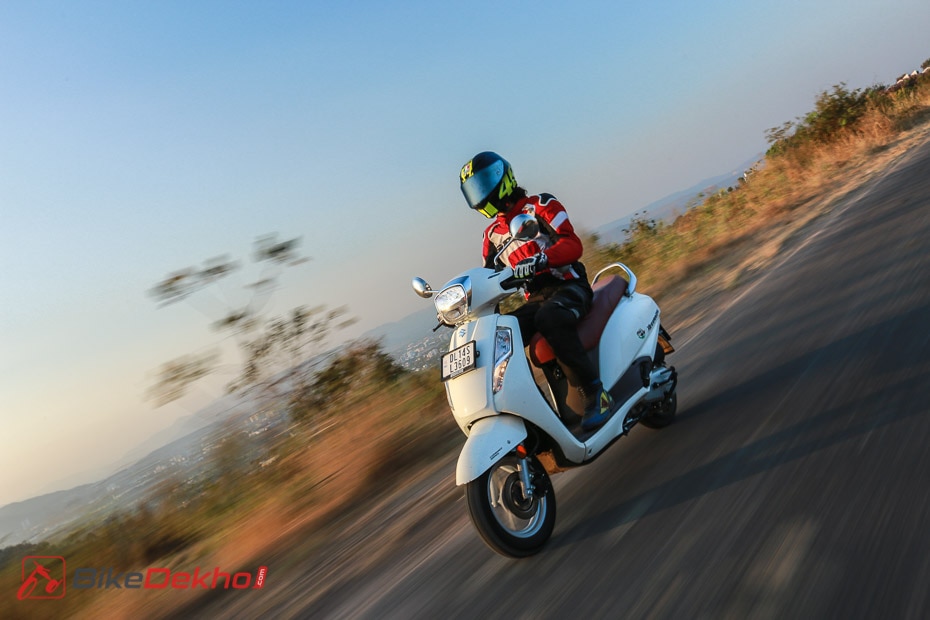 The Suzuki Access 125 has been a dominant contender in the 125cc space ever since it entered the India market way back in 2007. Being the only 125cc scooter in the market for quite some time, its reign remained unquestioned for almost a decade. Then came along the updated Access 125 which went on to become an absolute dominant force in the 125cc scooter space, outdoing many 110cc scooters in the process.

What worked in favour of the Access is the fact that it was the first 125 automatic scooter in the Indian market, plugging the gap between 100cc offerings (now 110cc) and 150cc geared scooters. The significant performance improvement over smaller scooters without much of a drop in efficiency or practicality had customers hooked, and how! So much so that the Access 125 didn't have a worthy adversary for a long, long time.

But now, a decade later, the market has transitioned from simple utilitarian scooters to more modern, powerful and tech-laden ones thanks to the introduction of new safety and emission standards. It all boils down to who offers more for the money’s worth. Yes, the Access 125 still sits at the top of the food chain, but can it hold onto the position with its most recent update?

We’ve always had mixed feelings about the scooter’s design. I personally feel Suzuki could have given the Access a complete makeover for 2020. Something on the lines of say.. the Suzuki Saluto 125cc that was recently unveiled in Taiwan would surely do the trick! But for now, we have to make do with what we have, which isn’t all that bad. The scooter looks identical to the previous-gen model, with a curvy design language, a handlebar-mounted headlamp, apron-mounted turn indicators, contrasting seat, chrome trims to accentuate its premiumness and an exhaust with a slightly odd-looking, tapered chrome heat shield.

In the same vein, it maintains its build quality, which is among the best in the segment, with consistent panel gaps and solid feeling plastics.

Also Read: BS6-compliant Suzuki Access 125: All You Need To Know

You can choose between two variants: Standard and Special Edition. The latter comes with a dual-tone seat, blacked-out mechanicals and four colour options: white, black, burgundy and blue in matte. The standard option, on the other hand, gets five basic paint schemes: blue, white, black, grey and silver.

The BS6 Access 125 isn’t different from any other scooter in the market when it comes to ergonomics. It features tall handlebars and a large floorboard which leaves plenty of knee room for even the tallest of riders. So having the handlebar fouling with the rider's knees isn’t an issue here. Move further back and the long plush seat ensures there’s enough room for two generously proportioned riders. The seat has ample cushioning but isn’t too soft, which means you could spend more saddle time without your backside going sore. Also, at 773mm, the seat height is accessible for even short riders. The only quibble we had is the pillion footpegs which could have been slightly larger and flatter for better foot support.

So what’s new in the tech and features department? To keep in line with the BS6 emission norms, the Access gets a tweaked 125cc motor with fuel injection. Besides this, the scooter features a full LED headlight compared to the conventional halogen unit on the BS4 model. While it has good throw and spread which is fine within city limits, it lacks intensity and which becomes quite evident on pitch dark roads.

Next up is the new Eco assist illumination which, unlike conventional eco indicators, forms an arch around the speedometer. It stays green when you’re easy on the throttle but gradually turns blue when you begin to accelerate harder. However, we’d like to point out that the Eco assist is merely an indicator and doesn’t really guide the rider with throttle inputs. Another stumbling block is the analogue-digital instrument console with conventional readouts like a fuel gauge, odometer and two trip meters. Sure, it’s legible and easy to read even in the dark, but a full-digital console would surely give the scooter a couple of extra brownie points.

Other creature comforts come in the form of a USB charging socket placed on the front apron right beside a nifty cubby hole which could be used to store knick-knacks like your phone or wallet. However, we’d advise you to be careful in such situations as it's quite easy for your phone or wallet to fall out of the open storage when you go through crater-sized potholes or over large speed breakers.

For ease of use, Suzuki has equipped the BS6 Access with an external fuel filler cap placed at the back. But unlike other scooters which have the facility to remotely open the lid, the one on the Access requires you to get off the scooter and physically open the cover with a key. An unlock switch right next to the ignition fob, like the Activa 125 BS6, would have been ideal here.

Coming to the meat of the matter. Like most BS6 two-wheelers, you’d probably expect the BS6 Access 125 to lose out on performance, but that isn’t the case here. The folks at Suzuki have managed to eke out just as much power as before from the 124cc engine. It produces the same 8.7PS but loses out on a bit of torque -- 0.2Nm to be precise. Thankfully this drop is small enough not to make any noticeable difference in real-world conditions.

Interestingly, even though the scooter gained 2kg during the transition from BS4 to BS6, it still manages to dart off the line rather eagerly and has enough grunt quick overtakes. In fact, the BS6 Access is one of the quickest 125cc scooters we’ve tested so far, quicker than even the Hero Maestro Edge 125.

Furthermore, the addition of fuel injection means the engine feels smoother than before and responds almost instantaneously to the smallest of throttle inputs. The engineers have also managed to overcome any lag from the CVT gearbox. What you get in return is a crip and precise throttle and a frugal motor that delivers better fuel efficiency than the previous iteration. Thanks to the new setup, the motor can cruise comfortably between 70-80kmph on highways.

The updated Suzuki Access 125's suspension setup is one of the best in the market. Be it potholes or huge speed breakers, the setup is configured to soak them up with ease, consequently offering excellent ride quality. The Access SE we tested came equipped with a front disc brake and a rear drum brake which offer good progression and feedback. And though it works better than the previous-gen model while shedding speed, it still lacks bite compared to other front disc brake-equipped scooters.

Despite the weight gain, the Access 125 still feels nimble on its feet and manages to weave through traffic with utmost ease. Factor in the 12-inch front wheel and you have a scooter that’s as steady as a rock, be it in corners or simply gunning it in a straight line.

Granted, the extra dough does get you very little in terms of new features. The competition offers much more than just an LED headlight, an external fuel filler, eco assist indicator and fuel-injection. But being liberal with features wasn’t one of Suzuki’s strengths in the first place; its sweet little engine is what got people hooked on to it. The sheer eagerness and refinement of the motor along with its ease of use put other scooters to shame, thus setting a new benchmark in the 125cc family scooter segment.

The BS6 Suzuki Access 125 is a dream to ride, be it everyday use or short weekend getaways. And Suzuki has indeed managed to up its game with this new model.