Published On Jun 7, 2016 By Team Bikedekho for Royal Enfield Himalayan

The Royal Enfield Himalayan goes against the Mahindra Mojo, an adventurer-tourer versus a touring machine. Some might argue that this comparison is vaguely paradoxical as the Himalayan comes in its element where the Mojo’s road ends, pun intended. But despite sporting different body styles, they have a lot in common apart from the target group. Both motorcycles are powered by a long stroke single-cylinder unit. Both churn out more or less the same power and torque, and most importantly they are priced very closely too. So if you are the kind that spends more time on the saddle than at home which one should you put your money on? 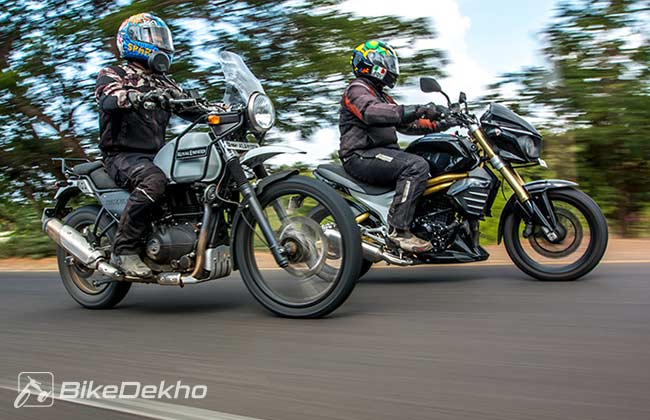 Before anyone steps into a showroom to take a test ride, it’s the design of the motorcycle that lures him into it. In that regard, the Royal Enfield Himalayan with its minimalistic approach stays true to its adventure-tourer DNA. RE designers have nailed the brief so well that everything on the Himalayan unites well to make it look the part. The high mounted mud guard, the tall windscreen, the bash plate and the exposed sub-frame all flaunt the ruggedness that forms the ethos of the motorcycle.

Meanwhile, the Mojo looks a bit disproportionate mainly due to its extra-large headlight and USD forks, and the relatively narrow rear end. The tank looks good and is nicely chiselled but the combination of the golden ribs and the gigantic radiator cover is more of a nip in the bud. While I personally am not a huge fan of its overall design, to the ‘junta’ it comes out as an offering from a segment above. The bulk sure turns of a lot of heads, we have to give it that. The switch gear quality and the overall fit and finish on both the motorcycles is acceptable.

In terms of features, both bikes come equally well kitted. The Himalayan comes with a semi-digital instrumentation that shows the ambient temperature, has a compass, average speed recorder, service indicator among other things. The Mojo on the other hand gets a funkier looking instrumentation that comes with an illuminated tachometer, top-speed recorder and more. Considering these are bikes that will be ridden over long distances, they miss out on projector headlamps and ABS.

Although the Mojo displaces just 295cc as opposed to the Himalayan which sports a long stroke 410cc motor, power and torque figures of both these bikes are more or less similar. The Mojo makes 28PS and 30Nm while the Himalayan makes 24.8PS and 32Nm. But in terms of the way the power is delivered, both these motorcycles are quite distinct.

Ride the Mojo and you will immediately feel that all those years spent on R&D have paid off really well for Mahindra. The bike has good mid-range grunt thanks to which it can comfortably cruise at three-digit speeds for long hours. But as you rev it harder and go closer to its top speed, some vibrations are felt on the pegs and the handle bars. In terms of outright acceleration though, the Mojo is definitely faster than the Himalayan.

The Himalayan’s engine too has been newly developed by Royal Enfield. Although this powerplant feels a lot smoother than the ones in its siblings, in terms of refinement, it still can’t match the Mojo. Moreover, the noise from the engine can get a bit annoying especially when riding continuously at high revs. The engine feels at home at speed of around 90-100kmph; anything beyond that and it feels crude. And then the additional 20kg or something weight of the Himalayan shows when you twist the wrist to overtake at three-digit speeds. It takes a while to hit that ton but maintaining the speed isn’t much of a task.

The Mojo comes mated to a 6-speed gearbox while the Himalayan has been fitted with a 5-speed ‘box. Shift quality on the Mojo isn’t quite as smooth as some other motorcycles in the market, but it shifts a lot more effortlessly than the Himalayan.

While the Himalayan loses a few points with regard to its powerplant, it more than makes it up in terms of ride quality. Aided by the large 21-inch wheels and a 200mm long travel suspension up front and the monoshock setup at the back, the Himalayan feels like a pure-bred adventure-tourer that can take on potholes of all sizes at any speed.

Aside from the ride quality, full marks to RE for the unbiased weight distribution. In fact, it has been done so smartly, that while riding at slow speeds, the Himalayan feels lighter than the Mojo although that isn’t the case. The 800mm seat height makes the ride even more comfortable. But it isn’t all roses for the Himalayan. Being oil-cooled, it tends to heat up a bit in traffic something that the liquid-cooled Mojo takes care of with ease.

The Mojo’s USD forks up ahead and a monoshock setup at the back help in absorbing small potholes and undulations with fair poise but the larger bumps end up unsettling the bike. But the Mahindra offering outshines its rival in discussion in the handling department. A lot of its credit goes to the super sticky Pirelli tyres that it comes fitted with. However, take the Mojo trail riding and the road-focused tyres don’t help the cause. And this is where the fun begins on the Himalayan. The shape of the tank is just right to grip with the inside of your thighs and it is extremely predictable and easy to control while off-roading. Both bikes sport disc brakes at either ends and skip ABS. Bite from the brakes on both the motorcycles could have been better.

The Royal Enfield Himalayan carries a sticker price of Rs 1.55 lakh while the Mojo is priced at Rs 1.63 lakh (ex-showroom Delhi). As far as efficiency is concerned, in our test the Mojo returned an overall figure of 27kmpl and the Himalayan returned an impressive 33.5kmpl.

After putting both these motorcycles through a rigorous tests, it is the Royal Enfield Himalayan that comes out at the top. Aside from an attractive design, it has a plush ride quality and efficiency going for it. Not to forget, it stays true to its adventure-tourer DNA making it the most fun affordable bike we have ridden in recent times. The Mojo on the other hand, is an impressive first attempt from Mahindra to step into the performance segment but falls behind in terms of looks, weight distribution, aspirational value and dealer network.