Has a mere engine swap made the Dominar a far more sensible and affordable package? 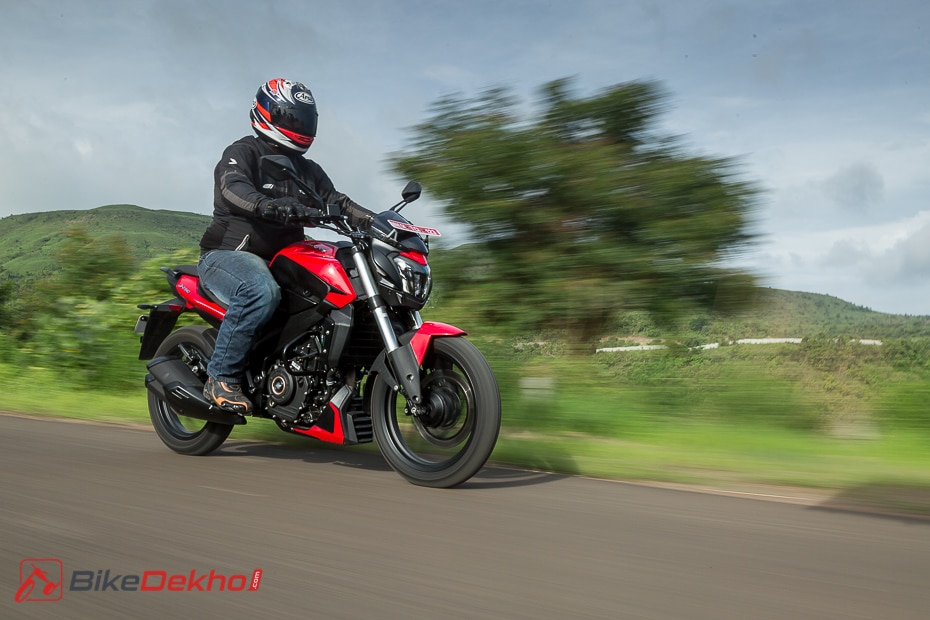 The last comprehensive update preceding the BS6 transition made the Bajaj Dominar 400 a wholesome package. The power bump aids its highway capabilities, while the revised suspension setup elevates the overall riding experience. Add some features to the mix and you have a bike that, in theory, should be hard to resist. While it’s a definite improvement over its predecessor, it lacks one crucial element: a clear purpose. Is it a sports tourer? Well, the engine feels too manic at any speed. Is it a cruiser? The motor feels rather aggressive. Add to that its price tag of Rs 1,94,751 (thanks to constant price hikes) also leaves a gaping hole in between the Pulsar NS200 and the Dominar 400.

This is where the smaller Dominar 250 comes in. It’s been positioned not only to plug this gap, but also to take on the quarter-litre segment which is witnessing a sudden surge in demand. It’s a smaller, friendlier package priced at Rs 1.6 lakh, which may attract budget-conscious enthusiasts. So has Bajaj’s gamble paid off?

On the surface, Dominar 250 looks identical to its 400cc sibling. The only differentiating factors come in the form of a striking new red paint scheme, skinnier tyres, and slimmer 37mm fork. It’s still pretty hard to tell the two apart when on a move. That said, I prefer the 250’s red paint scheme over the 400’s green livery. While it doesn’t quite have the premium metallic finish with flakes, it looks sportier and makes the bike pop.

The somewhat skinnier tyres look a bit disproportionate to the chubby rear end but it isn’t a deal breaker by any means. The switchgear quality and overall finish levels are on par with industry standards, but not something one could brag about.

There’s no change in ergos either. You sit upright with your hands reaching out to the tall and wide handlebars which makes for a very slightly leaned forward riding posture. The footpegs are rear set but aren’t uncomfortable in any way. The rider’s seat is spacious, well padded and offers ample support. The seat cushion, despite being on the firmer side, is comfortable. I could spend hours on the saddle without worrying about a sore back. My only quibble is with the rear seat which feels a bit cramped due to the tapering design.

A seat height of 800mm is fairly accessible too. I’m 5’10” and had no issues flat-footing the bike. However, riders shorter than 5’5” may find themselves tiptoeing while moving the bike around in the parking lot or in stop-and-go traffic.

The full-LED headlight on the Dominar 400 was one of the best in the business and has thankfully been unchanged. The throw and spread of the sleek LED unit has enough illumination to light up the darkest of roads but it lacks depth, which is an expected trade-off with LED headlamps. The rear quarter panels neatly integrate into the trademark split LED tail lamp.

The 250 features the first-gen split instrument console with the digital unit working all the primary functions and the secondary console housing the tell-tale lights. It works well and is pretty legible even in broad daylight. While the integration of the older unit didn’t really bother me, I would have loved to see information such as distance to empty, average and real-time fuel-consumption, and possibly a gear position indicator on the primary console.

It also retains the Dominar 400’s wider mirrors with cast aluminium stalks which offer ample rear view vision. But, the stiffness of these mirrors means it’s a bit difficult to adjust.

The use of USD forks and a radial caliper adds a touch of premiumness. However, cost-cutting measures are pretty evident. The 400’s premium looking dual two-tone diamond-cut wheels and radial tyres make way for a single-tone wheel design and slimmer rubber. Quite honestly though, it doesn’t make much of a difference and I could see myself living without the dual-tone wheels for the lower asking price.

Some of you may probably expect the Dominar range to be as fast and frantic as the KTM Duke since they share the same powertrain. But are they really meant to be? A powerful, eager motor is expected from KTMs since they’re bred to offer thrilling performance. But it’s quite the opposite when it comes to the Dominar. A rabid 390 Duke’s engine on the Dominar 400 feels like a complete mismarriage which in a way kills the vibe of the bike. We perceive the Dominar range a bit differently despite their ‘hypertourer’ tag.

Tourers are meant to offer a relaxed ride with an engine that delivers power in a linear fashion. Unfortunately, that wasn’t the case with the Dominar 400. But the 250 seems to be sticking true to philosophy.

The 248.77cc single-cylinder, liquid-cooled engine offers Japanese motorcycle levels of refinement and is a lot easier to live with. Sure, it’s a detuned 250 Duke mill, but the sheer tractability of the motor is what left us speechless. It feels a bit sluggish below 5,500rpm but comes into its own post that and pulls hard until about 8000rpm. That’s where the meat of the power lies. The motor has enough bottom-end performance to pull cleanly from as low as 45kmph in 6th gear, 35kmph in 5th gear and 25kmph in 4th gear, thus underlining its flexibility.

The motor certainly has more grunt in the mid-range compared to the Duke, but it’s still a rather peaky motor. So, you will find yourself downshifting in city traffic to keep the motor in the powerband. Call me crazy but there’s a certain thrill in working the engine which wasn’t the case with the Dominar 400.

The tweaked 250cc motor also makes perfect sense for touring. Get on an open stretch of road and you’ll find yourself cruising at 100kmph at 6000rpm without breaking a sweat. The refinement of the engine is unparalleled at this point, with negligible vibes throughout the rev range. You’ll notice a minor buzz emanating through the footpegs and seat but it only creeps in when the engine’s closer to the redline.

The motor is quite happy at 120kmph but does take some time to get there. It also runs less efficiently at this juncture -- probably one of the reasons why the Dominar 250 offers just a little more fuel-efficiency than the 400 on highway runs. Nonetheless, you could still expect a theoretical highway range of over 400km on a full tank of fuel which should keep you on the road fairly long.

The Dominar 250’s revised compression ratio means it runs less stressed and is therefore well suited for the city. What adds weight to this claim is a fuel-efficiency figure that trumps its elder sibling. Although hauling 180kg (kerb) means the engine needs to work a bit harder thus offering around 6kmpl less than the lightweight 250 Duke.

The inclusion of a slipper clutch makes riding hard on twisty roads a calm and collected affair. The gearbox is silky smooth and delivers quick, positive shifts with every tap on the gear lever.

Also noteworthy is the throaty exhaust note on the Dominar 250 which sounds so much better than the 400. It’s mellow but manages to retain its bass which gives it more character.

Since the Dominar 250 is essentially a toned-down 400, it carries a lot of weight, 180kg to be precise. And that’s quite evident when you swing your leg over and try moving around the bike in the parking lot. But these perceptions soon disappear when the bike is in motion. In fact, the slimmer 37mm fork paired with skinnier tyres makes the bike feel livelier and a lot lighter than the 400. It’s quick to turn into corners and feels quite nimble while zipping through city traffic. Aiding its handling capabilities are its stock MRF tyres. They work well and offer a good amount of grip in both wet and dry conditions but aren’t as confidence inspiring as the radial tyres on the Dominar 400.

Don’t expect the Dominar 250 to handle as well KTM 250 Duke as it simply isn’t a corner carver. The longer wheelbase on the Dominar is meant for better straight line stability.

Moving on to the suspension setup. Bajaj had reworked the spring rates for the Dominar 400, but the monoshock was still set on the stiffer side and had the tendency of transferring jolts on sharp bumps. That isn’t the case with the 250. The revised spring rate has improved the suspension setup considerably which manages to flatten most bad road surfaces and potholes. The monoshock, though still on the firmer side, manages to gobble up sharp edges and ridges without any trouble. The suspension settles down and works even better when you have a pillion on board.

The braking setup is the same as the 250 Duke, but we believe it’s been tinkered with to work with the extra weight on the Dominar. Thankfully, it’s a dream to work with, unlike the 400 which felt a bit spongy. It offers good feedback and progression through the levers and delivers enough bite to bring the bike to a dead stop from 80kmph in just 31.53 meters.

The Dominar 250 is available in a single variant with two colour options on offer: red and black.

The moment of truth! Full disclaimer, I expected the Dominar 250 to follow the same path as its elding sibling: an engine swap that would lead to a very confused bike. Thankfully, I was proven wrong and how!

Its retuned 250cc powerplant is easier to live with and makes perfect sense in the city where it would spend most of its time, but don’t mistake that for lack of performance. The Dominar 250 is perfectly happy doing triple-digit speeds all day long on the highway with a well-balanced suspension setup that enhances the overall ride experience. It’s a lot easier on the pocket too, at Rs 1.6 lakh (ex-showroom).

To put it simply, the Dominar 400 had certain imperfections that have been rectified in the Dominar 250. It’s found its purpose in being a comfortable, competent and importantly, a flexible motorcycle -- something the Dominar was always meant to be and that’s high praise! All Bajaj needed to do was take a step back and dial down the Dominar. Who would have thought?